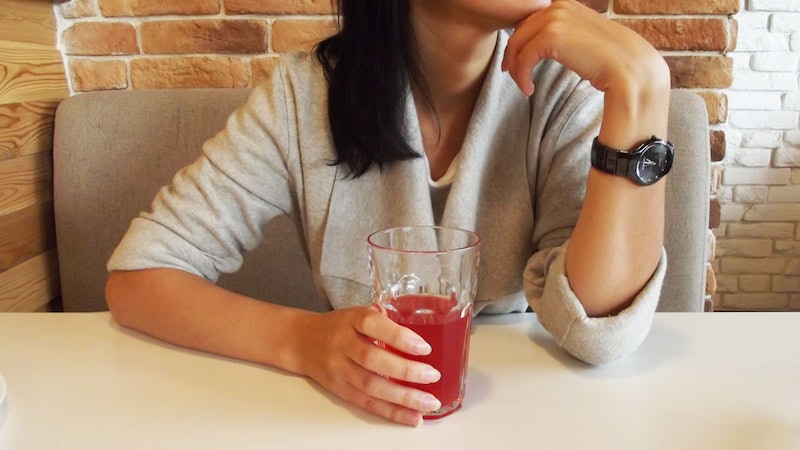 If you’ve ever had a urinary tract infection (aka, a UTI), you’ve probably been told by your mother or a friend that cranberry juice is an effective home remedy to treat this pesky health issue. In fact, many people even tout cranberry supplements as a holistic treatment alternative to prescription medication. However, experts say that cranberry juice definitely won’t cure a UTI, and this widespread remedy is all myth.

According to the U.S. Department of Health and Human Services, 50 out of every 100 women will have at least one UTI in their lifetime, and some will even experience recurring UTIs, which is three or more infections in a year. Moreover, as Everyday Health reported, around 12 percent of men will also have a UTI at some point. UTIs are the second most common type of infection in the body, according to MedlinePlus. Some of the symptoms of a UTI include feeling like you need to pee all the time, burning or pain when you urinate, stomachaches, smelly urine or discharge, a fever, and chills.

Cranberries, a fruit native to North America, was used medicinally among different Indigenous tribes for hundreds of years, according to the Family Health Diary. Though there’s no exact word on where the myth came from, it’s been a longstanding belief that cranberry juice can treat UTIs. However, OB/GYN Dr. Lakeisha Richardson tells Bustle that, unfortunately, this remedy doesn’t work: “Cranberry juice doesn’t treat UTIs, because UTIs are caused by bacteria, and all bacterial infections require an antibiotic for treatment,” she says.

Furthermore, Nicole Telfer, science content producer at the period tracker app Clue, explains, “Research so far does not support the use of cranberry juice (and other products like cranberry capsules and tablets) to significantly treat or reduce the frequency of recurrent UTIs.”

Though cranberry juice doesn’t treat UTIs, there is a catch. Telfer says that, “Laboratory studies have shown some evidence that cranberry products may prevent bacteria from attaching to the walls of the urethra.” Specifically, a 2009 study found a chemical found in cranberry products called proanthocyanidins (aka, PACs) prevented E. Coli.

This aside, both Telfer and Richardson say that many of the studies that have tested cranberry products as a preventative measure to stop UTIs still yielded mixed results, and are overall inconsistent and unreliable. It’s probably always a good idea to consult with your OB/GYN, or primary care doctor. “Unfortunately, there are no home remedies for UTIs that actually work. [...] If someone is experiencing burning with urination, bloody urine, or suprapubic pain, they should see a physician as soon as possible to start treatment,” Richardson explains. “Untreated UTIs can lead to serious infections such as pyelonephritis [a kidney infection], or sepsis.”

Luckily, according to Planned Parenthood, UTIs are easy to treat a majority of the time, and there are steps you can take to prevent yourself from getting one. Telfer says that practicing good vaginal hygiene, drinking more water, and weighing your contraception options — as some can increase your risk of bacteria and developing UTIs — are all small steps you can take to prevent UTIs in the future.

By all means, if you like the taste of cranberry juice, there’s no problem with drinking it on the regular. But, don’t expect it to treat a UTI — you’ll still have to see your physician to take care of this common health issue.

More like this
Got Brain Fog? Here Are The Best Supplements For Memory & Cognition
By Carolyn Steber
This Psychological Effect Might Be Keeping You From Hitting Your Goals
By Lexi Inks
Here's Why Your Knee Hurts When You Bend It
By Carolyn Steber
10 Ways To Be More Empathetic To Your Partner
By Raven Ishak and Lexi Inks
Get Even More From Bustle — Sign Up For The Newsletter