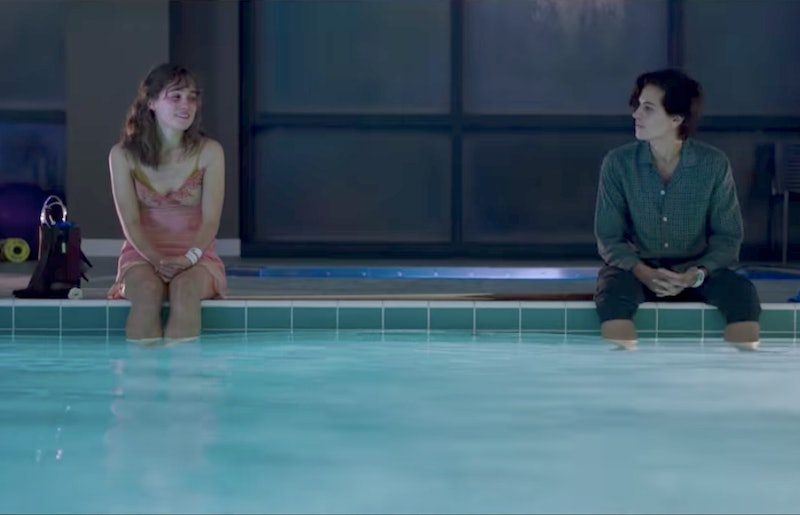 The new movie Five Feet Apart explores a love story between two young cystic fibrosis patients. And the relationship between the two main characters, played by Cole Sprouse and Haley Lu Richardson, has people asking about the "six feet apart" rule. The movie's name is a reference to a rule that people with cystic fibrosis must remain six feet away from one another, and it's a pretty important rule.

"To reduce the risk of spreading one's germs or getting them, it is recommended that not only should they keep a six-foot distance from other people with cystic fibrosis, but also avoid other activities that would put them in close physical contact [with people who are sick]. This includes hugging, kissing, and shaking hands," Betsy Bryson, a pediatric nurse practitioner who works with cystic fibrosis patients at Akron Children’s Hospital in Ohio, tells Bustle.

People with cystic fibrosis are also discouraged from sharing objects with others. "Another way germs can spread from coughing or sneezing is when the respiratory droplets land on a horizontal surface. Germs can stay alive on these surfaces for hours, even days." Bryson explains. "For this reason cystic fibrosis patients should not share common objects likes computers, pens, and toys."

Dr. Gregory Omlor, director of pulmonology at Akron Children’s Hospital, tells Bustle that in people who don't have cystic fibrosis, mucus plays an important role in reducing and spreading germs. However, this system doesn't work properly in people with CF. "People with cystic fibrosis have very thick mucus in their lungs. It is so thick that coughing cannot completely clear it so germs do not come out either." He adds that frequent use of antibiotics to fight these infections can lead to antibiotic resistance.

While the movie is bringing attention to a chronic and often misunderstood illness, some people have criticized Five Feet Apart for its alleged romanticization of cystic fibrosis. The six feet apart rule, in particular, "really is a life-and-death situation, which the movie reduces to a plot device," Jenn Whinnem, who lives with cystic fibrosis, told Refinery29. Though the film was informed by director Justin Baldoni's conversations with the late YouTuber Claire Wineland, who candidly discussed her experience with cystic fibrosis until her death in 2018, it's important to listen to people who live with cystic fibrosis about how they want to be represented. It's also worth understanding the medical basis for this rule — and the seriousness of following it — as viewers absorb the message of the film.