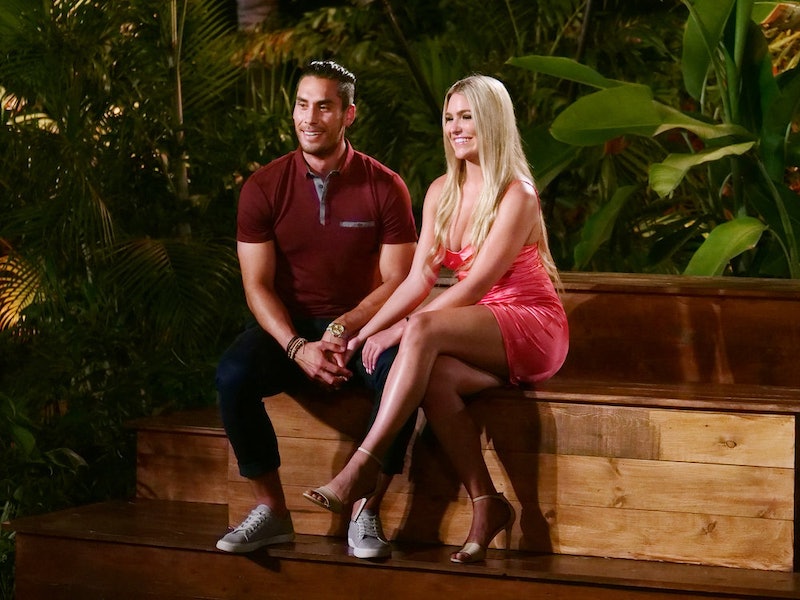 Spoilers ahead for Part 2 of the Temptation Island Season 2 finale. When he decided to leave Temptation Island with Toneata, David seemed very confident about his decision. But his Instagram and Twitter accounts (yes, he finally made a Twitter) suggest their relationship was fleeting.

Since making an Instagram in September, David has only followed four people: the other three Temptation Island guys Gavin, Casey, and Rick, and his (presumably) ex-girlfriend Kate. He does not follow Toneata, and Toneata does not follow him. On Twitter — which he only joined in October — David follows the same four people. Again, he and Toneata don't follow each other.

Further signaling that the two have parted ways, David told Temptation Island host Mark Walberg that he planned to move to Los Angeles with Toneata after the show. He has posted a few photos from L.A. since filming wrapped, but he's been traveling a lot in general. In the past few months, he's been in Phoenix, Arizona; New York City; Boston, Massachusetts and Denver. Plus, Kate just so happened to share a picture from L.A. around the same time that David did. That could just be coincidence...or it could mean they rekindled things. (Kate does follow him back, after all).

On the show, David seemed to gravitate toward Toneata because she was forgiving about what happened between him, Samantha, and Payton. He told Kate that being on the island made him realize he needs to be with someone who trusts him — even though, as Kate pointed out, he basically proved she had reason not to. Ultimately, though, it seems like what David really needed was some self-reflection.

"Self-reflection is a humbling process," he captioned a Nov. 24 post tagged in Jersey City, New Jersey (near Hoboken, where he's from and where he lived with Kate). On the same day, Toneata shared a post from across the country in Denver, Colorado.

David made similar comments during a November interview with PopCulture. "I think I needed to be in a better place with myself before I allowed somebody else in," he said. "I don't think at the beginning of Temptation Island I knew everything about myself to allow me to have the best possible relationship."

Does that mean he did figure out everything by the end of the show, in time to make things work with Toneata? They're either really dedicated to covering their tracks, or the answer is a hard "no."