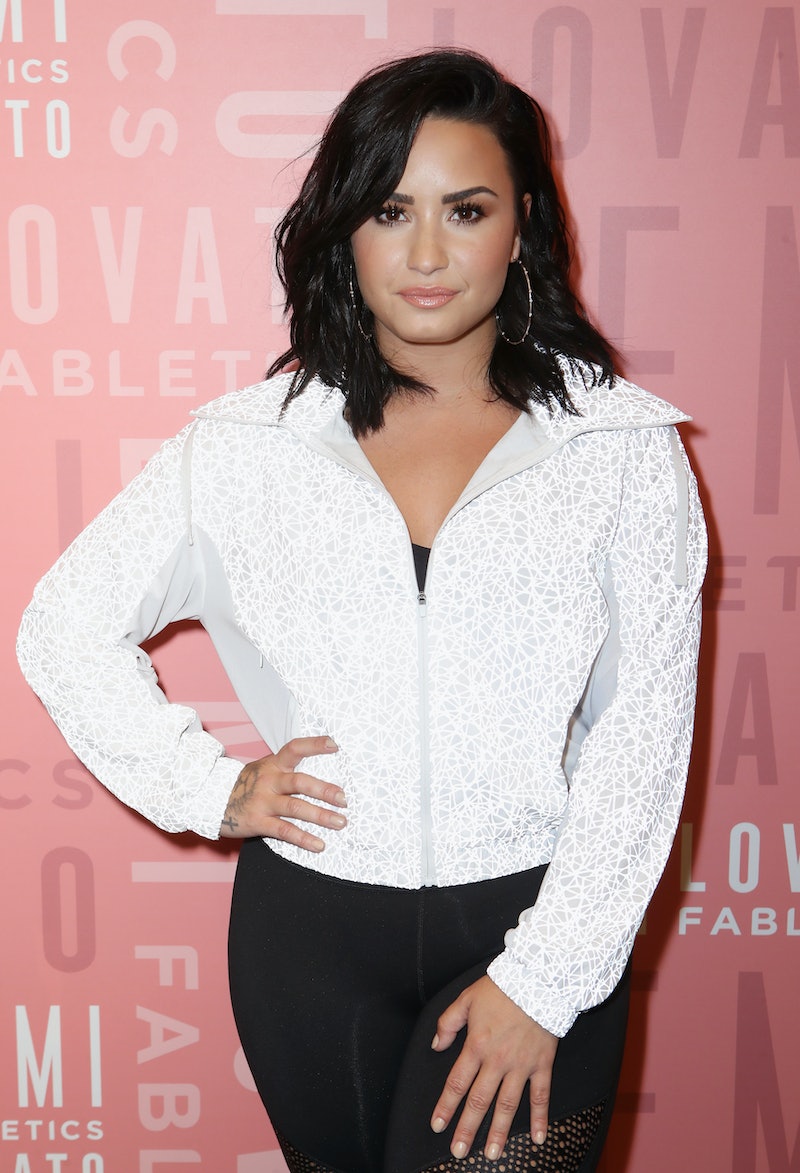 Demi Lovato recently took a step away from Hollywood to focus on her spirituality during a trip to Israel. However, things have become anything but peaceful as Lovato’s trip to Israel is now sparking backlash on social media due to her Instagram posts that some fans are calling disappointing. The uproar caused by Lovato’s photos is rooted in the conflict between Israel/Palestine which the star has yet to address publicly. (Bustle reached out to Lovato’s rep about this backlash, but did not receive an immediate response.)

UPDATE, Oct. 3: According to Entertainment Tonight and E! News, Lovato posted an apology in response to the backlash on her Instagram Story overnight; the post no longer appears on her page. Lovato's statement reportedly read, in part:

"I'm extremely frustrated. I accepted a free trip to Israel in exchange for a few posts. No one told me there would be anything wrong with going or that I could possibly be offending anyone. With that being said, I'm sorry if I've hurt or offended anyone, that was not my intention... This was meant to be a spiritual experience for me, NOT A POLITICAL STATEMENT and now I realize it hurt people and for that I'm sorry. Sorry I'm not more educated, and sorry for thinking this trip was just a spiritual experience."

Bustle reached out to Lovato's rep for further comment and clarification.

EARLIER: On Oct. 1, Lovato shared some photos from her trip to Israel, explaining in the caption that she "was raised Christian and [has] Jewish ancestors" and was excited to travel to places she'd "read about in the Bible growing up." She described her time in Israel as "magical," noting that she got to experience a baptism in the Jordan River, which, as she wrote, was "the same place Jesus was baptized."

Even though Lovato described the trip as "so important for my well-being, my heart, and my soul," some fans took issue with the fact that she has not spoken about the ongoing Israel-Palestine conflict in any of her posts. While the conflict is complex and dates back centuries, the root of the issue is that both the Israeli Jewish population and the Palestinian Arabs having laid claim to the same land. Many believe that Israel was "stolen" from the Palestinians, which has resulted in multiple wars and tens of thousands of deaths. Following recent elections in Israel, where the right-wing Likud party, led by Prime Minister Benjamin Netanyahu, lost its majority in Israel's congress, many are wondering what a peace plan could look like moving forward. Given that the outcome of these elections will continue to impact Palestinians' freedom of movement throughout the region, this issue is particularly relevant during Lovato's trip.

Of course, Lovato's experience isn't a singular one. Many people from around the world have traveled to the country for similarly meaningful trips, especially since Jerusalem has ties to three major world religions. But given that complicated history, many on Twitter wish that Lovato would address the matter in some way, even if that meant just including the name Palestine, rather than referring to the land solely as Israel. Others voiced outright disappointment in Lovato, claiming she didn't do enough research before traveling there.

As plenty of people on Twitter noted, Lovato turned off the comments on one of her Instagram posts, which eliminated the possibility for users to engage with her about the conflict. On a separate Instagram post from the trip where comments were enabled, numerous fans commented with the hashtag #FreePalestine and the Palestine flag emoji.

The singer is far from the first celebrity to receive this type of backlash. In early 2018, Lorde canceled her concert in Tel Aviv, Israel after being urged to do so by those who have criticized the Israeli state, according to the Washington Post. Madonna also came under fire recently for a performance in Tel Aviv in May during the Eurovision song contest. As USA Today noted, the superstar was urged to not perform by the Palestinian Campaign for the Academic and Cultural Boycott of Israel, who wrote an open letter to the star on Twitter. However, Madonna ultimately did perform and had her background dancers wear Israeli and Palestinian flags onstage, a move that received mixed reviews, particularly from Eurovision organizers who did not want to make the event political in nature.

Other celebrities have outright addressed the conflict, including Gigi Hadid, who is half-Palestinian. In May 2018, Hadid explained her stance on the conflict, writing that she's not against anyone, but that she simply wants people to peacefully coexist. "My intent is never to further separate groups in hatred- I live my life loving everyone regardless of religion/race," she wrote on Twitter along with #freepalestine hashtag.

With all of this backlash and Lovato's history of addressing subjects head-on, it's entirely possible she'll take a page out of Hadid's handbook by sharing her side. But at the time of reporting, she has yet to comment on the controversy.