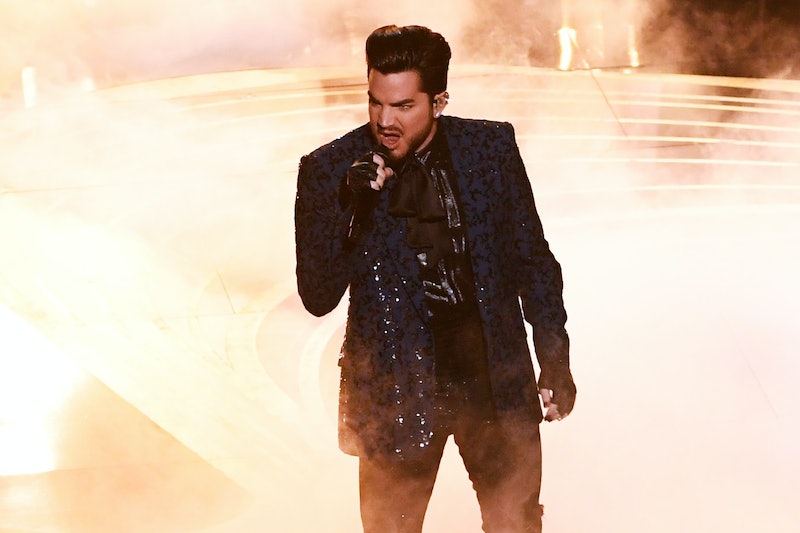 Although the 2019 Academy Awards may have had no host, the show still opened with a bang. To start off the night, American Idol alum Adam Lambert took the stage for a musical performance alongside the beloved rock band Queen — aka the group featured in Best Picture nominee Bohemian Rhapsody. But people who haven't been following the band's adventures in the last several years are naturally confused why Adam Lambert performed with Queen at the Oscars. Since when did the musician start singing "We Will Rock You" on the regular?!

Since a long time ago, actually. Lambert first began performing with the iconic band in 2011, when they joined forces at the MTV Europe Music Awards. Over the next two years, the singer performed at several concerts with Queen, and in 2014, the two acts started touring officially together worldwide as Queen + Adam Lambert. The collaboration was a huge success, leading to many tours, strong reviews, and even a Las Vegas residency in 2018. They're currently planning their next tour, which will run throughout the U.S. this summer.

So no, Lambert performing with Queen — aka guitarist Brian May and drummer Roger Taylor — at the Oscars wasn't some random choice thrown together at the last minute, if that's what you thought. The singer has now been connected with the band for eight years, and considering the tour coming up soon, it seems like neither entity has any intention of parting ways anytime soon.

For anyone who hadn't seen Queen + Adam Lambert live before, the Oscars performance was a great example of what they're like onstage. They did a medley of classics like "We Will Rock You" and “We Are The Champions”, exciting both audiences at home and those in the auditorium — including Oscar nominees like Lady Gaga and Glenn Close, who were seen dancing along to the music from their seats.

The performance wasn't only a fun beginning of the night, but a great tribute to the late Freddie Mercury, aka the original Queen frontman, who died in 1991. Mercury is, as many viewers know, the subject of the Best Picture nominee Bohemian Rhapsody, which chronicles Mercury's rise to fame with the band in the '70s and '80s. Rami Malek stars in the film as Mercury, and his performance earned him a Best Actor nomination from the Oscars. As Lambert and Queen performed, an image of Mercury appeared in the background.

It was a moving, powerful start to the evening, and it showed off Lambert's frontman skills for anyone who only knew him as the runner-up of American Idol Season 8 or from his solo work as an artist. Since Idol, Lambert has had quite a successful career, releasing several hit songs, guest-starring on Pretty Little Liars and Glee, and, of course, teaming up with Queen. He even had a brief cameo in Bohemian Rhapsody as a truck driver, although it was blink-and-you-miss-it fast.

Queen + Adam Lambert is clearly a great fit, and the group's Oscars performance proved that even without a host, the night was still able to open on a great note.