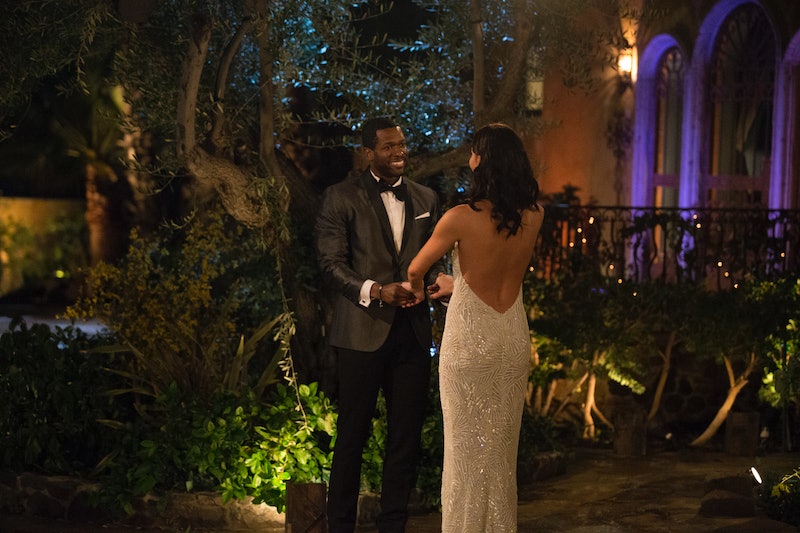 Breakups are hard. Breakups are awkward. Breakups are even harder and more awkward when they're on national television for millions and millions of people to see. Current Bachelorette Becca has already had her share of awkward, and we're only a few weeks in. The latest mishap? Becca sent Jean Blanc home on The Bachelorette, and the secondhand embarrassment was palpable across the land.

We're not very far into this season of The Bachelorette, but Jean Blanc was already convinced that he needed his own one-on-one date, and he wanted it now, dammit! It was nice of Jean Blanc to get Becca her own perfume (apparently he had it made especially for her, but the bottle looked like Dior Miss Dior with a different label on it), but it wasn't so nice of Jean Blanc to lay it on so heavy while they were talking. Becca even gave Jean Blanc a smooch even though it didn't really seem like she wanted to. Then, Jean Blanc proceeded to lay it on thick — and by thick, I mean like when you have to mix the jar of natural peanut butter and you can't move your spoon. That thick. Jean Blanc said:

"I just wanted to... reaffirm... how I'm feeling about you. I know relationships are developing at a different pace... but I feel like the connection has always been there... I've been doing a lot of thinking, and I really haven't felt like this in a long, long time. I just wanted you to know I'm truly falling for you, and I'm falling in love with you, and I'm just putting it out there."

Becca was all, "I don't know if I see this, so I think you should probably go." Which, good for her! "Can I walk you out?" is probably the best way to go about this, because it's the nicest way to make someone who is making you uncomfortable leave. But speaking of uncomfortable, it gets worse. Jean Blanc basically asked for his gift back, and then he told Becca that he was actually just telling her what he thought she wanted to hear when he said that he was falling in love with her. "I just thought that's where you wanted to take things," he said.

Uh, what now? The more Jean Blanc talked, the more it seemed like he just wanted to be on television, and Twitter fans took notice of how supremely awkward this whole thing was.

Grocery Joe Wanted To Know About The Perfume

Did she give it back?

Some Likened Jean Blanc's Actions To A Tantrum

Others Were Just Really Uncomfortable

This whole thing really just made Jean Blanc seem like he was in it for the "wrong reasons," as they say on the show. Was he there to fall in love with Becca? If so, why would he say that he was in love if he wasn't actually in love? For now, Jean Blanc is still pushing his side of the story (whatever that is, since I'm a little confused still) on his Instagram, writing in a caption, "@bkoof ....love is a two way street....I wish I was met half way.. I need to take time out and reflect and pray about this situation."

Dude, pray about what? You lied and you got caught. Now seems like the right the time for Jean Blanc to move on with his life, because if you have as many followers as you're sure to get following a season of The Bachelorette, you'll be set with appearances and Hello Fresh sponsored content posts for at least the next five years. I bet Jean Blanc has some fragrance collabs coming up at the end of all this.

Until then, Twitter will just be processing that secondhand embarrassment.