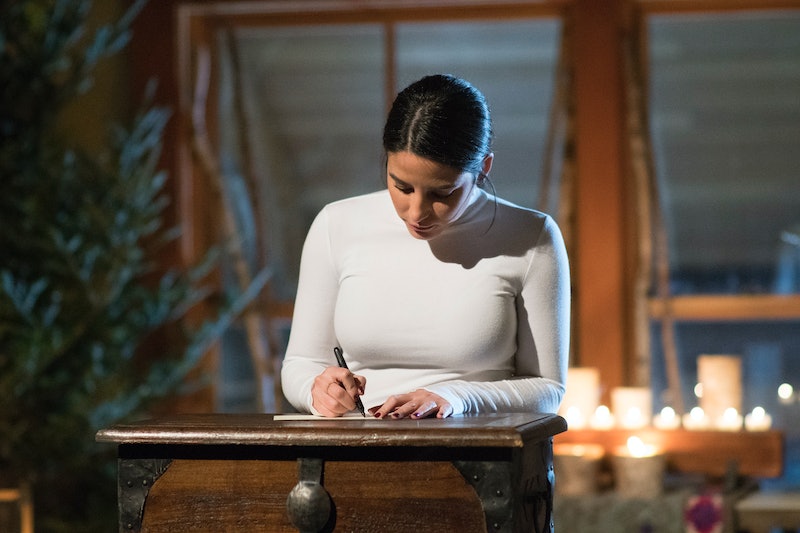 The Bachelor Winter Games have been good for fans who love a good romance, but that means when the breakups start, they hit hard. On Thursday night's finale, Jordan and Bibiana called it quits, despite the fact that they really seemed to have hit it off. So why did Bibiana and Jordan break up on Bachelor Winter Games when they seemed so perfect for each other? Unfortunately, Bibiana just wasn't ready for that kind of commitment.

All season long, Bibiana and Jordan (who's from The Bachelor New Zealand) have had crazy chemistry, even if they didn't do so hot during Tuesday night's kissing competition. And even though some fans may have predicted that in the end, Jordan would break Bibiana's heart, it actually ended up happening the other way around.

Basically, it all started when Jordan wanted to have a discussion about what the future would look like for them after filming ended, and thinking ahead like that totally freaked Bibiana out — we're talking a major commitment meltdown. And sadly, that led her to realize that she had to make a decision — was she ready to have an actual relationship with Jordan in the real world, when the cameras are off and the games are over?

Ironically enough, they were both stressed out about the situation enough that they resorted to their coping mechanisms — Bibiana started packing and Jordan started doing dishes — and that small action kind of made it seem like they were actually meant for each other after all. But they were simply not meant to be... at least, not right now. According to Bibiana, anyway, because she ended up being the one to break things off as she came to grips with the fact that she wasn't ready to take things to the next level with Jordan, as perfect as he seemed to be for her.

"You find this amazing guy who makes you laugh, who makes you feel all these things, who you just have like these crazy coincidences and you can't believe he's right in front of you but then you just rushed. And you realize that you're not on the same page."

Bibiana's freak out involved a lot of tears, and Jordan was absolutely devastated to hear that things were over between them. It was such a rough breakup (especially for two people who hadn't known each other for that long) that it was actually hard to watch. It obviously wasn't an easy decision for Bibiana, but it seemed like something she needed to do. In the end, they both decided to leave Vermont and go back home. It was almost that kind of breakup that's sadder because it's nobody's fault, and it's hard to blame her. Who could feel ready for a full blown relationship after having spent so little time with someone?

"I wish I could just switch it off in my mind and give him everything," she said. But if you're wishing they could try things again, you might be in luck. As the episode aired, Bibiana shared the following tweet:

Sadly, she offered no further explanation, but that means she still doesn't know if ending things with Jordan was a good idea or not? Maybe she regrets her decision? Maybe now that filming is over, they'll get back together and live happily ever after, just as so many fans have been hoping they would?

Who knows what the future holds? Hopefully, Bibiana made the right decision for her in that moment, and whether or not they get back together, she and Jordan both seem to have some wonderful memories from the Winter Games.