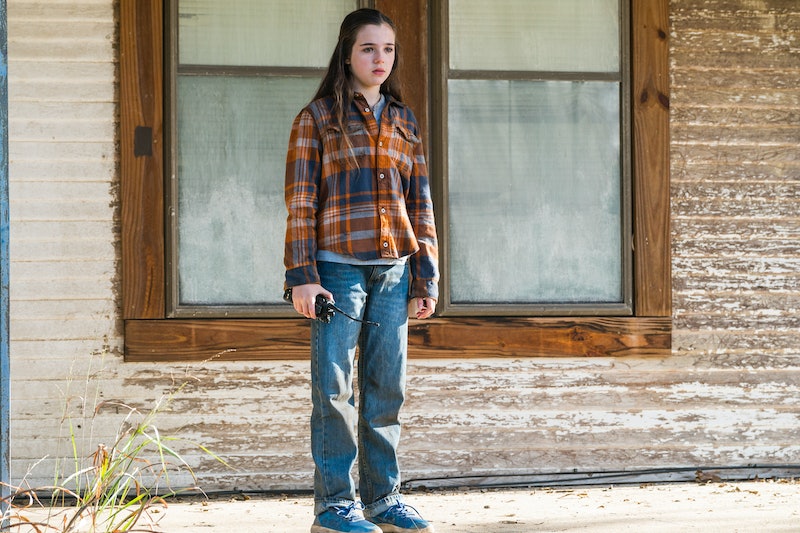 Spoilers ahead for the April 29 episode. In the zombie apocalypse of Fear The Walking Dead, nobody can be trusted and anyone can be a killer. This Sunday, a major player learns that the hard way. Why does Charlie kill Nick on Fear The Walking Dead? All-out war may be coming for the Vultures soon thanks to the little girl's actions.

Most likely, this is payback for Nick killing Mel's brother Ennis. Charlie was either sent to kill Nick, or decided to do it herself. Mel and Ennis are her family, after all. One borrowed copy of The Little Prince can't change that. In an intense scene that has yet to be explained through flashbacks, Morgan has to keep Nick from charging hammer-first like a Norse god towards the hipster's second in command when they run in to him. When Nick dares Morgan to kill him, Morgan steps aside, and Nick extracts his revenge. That's the problem with an eye for an eye, to paraphrase a popular Ghandi quote — it never ends.

So, the answer to why Charlie kills Nick lies is the answer to why Nick kills Ennis. Head hurt, yet? The flashbacks in the episode do fill in some gaps, however. They not only show how Madison and Nick tried to maintain their status quo after the Vultures arrive, but also showed how Charlie seemed slightly conflicted about betraying them. The radio, additionally, shows how the villainous group was able to stay one step ahead of them.

Charlie is clearly not conflicted anymore, which is heartbreaking for a couple of reasons. Not only is Nick dead, after finally conquering his own demons and repairing years of hurt between him and his family, but he still cares about Charlie up until the very end. He treasures the bond they formed while she was living with them in the stadium, even though it was two weeks long and two-faced to boot.

Madison stresses the importance of finding the good in every situation, whether it's as insignificant as a flower or seemingly stupid. Charlie was potentially supposed to represent the good in the Vultures. But what good is taking in an orphan if this is how you raise her?

That said, where is Madison during all of this? She's the only major player missing from the group when they ambush Morgan and company, and she hasn't been seen in the present at all. Well, Daniel hasn't been seen either, but that's kind of Daniel's way on Fear The Walking Dead? Is it possible that Madison also dies in between these two timelines/color schemes? Or, alternatively, could she be on the side of the Vultures? That would potentially add a devastating new meaning to Charlie's execution. It seems so unlikely that she could ever betray her family in such a major way, but this is a huge mystery.

It's also a devastating blow for Morgan, who is still new to this group. Not only has he now lost another friend and potential mentee, one of the reasons that he left Alexandria on The Walking Dead was the way children were becoming killers and awakening that instinct. Charlie is not growing up in an environment that believes all life is precious. Sure, the apocalypse is brutal and you have to be prepared to kill — but cold blooded murders are still frowned upon. Nick (as far as we know) shouldn't have killed Ennis and Charlie shouldn't have killed Nick.

In an interview with Entertainment Weekly, co-showrunner Andrew Chambliss stressed that the Vultures are more of an existential or philosophical threat than a violent one — and if that was ever really the case, it isn't now. A child putting a bullet in your chest is not something covered by Kierkegaard.

At least Nick will still appear in flashbacks for part of the season, it stands to reason. Whatever happened between him and Ennis and Madison and Charlie, for that matter, needs to be explained. So while he will be missed by his family, he likely won't be missed on the show just yet. The final shot, of flashback Nick shows that he did find peace, despite the path.