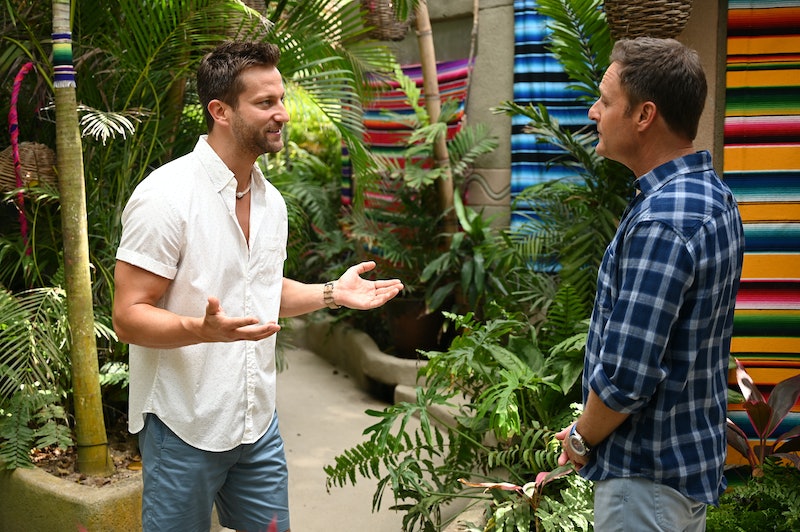 When the cast photos were released for Bachelor in Paradise Season 6, there were two reactions to Chris Bukowski's name on that list. Some new viewers might have ben confused because they couldn't remember what season was from, but longtime fans were confused for an entirely different reason. Mostly because Chris Bukowski retired from reality TV back in 2015, and he didn't just stop appearing on the shows like most other contestants. He went for it. To make it all the more official, Chris retired with a speech on an episode of After Paradise with host Chris Harrison by his side.

At the time, the Bachelor franchise veteran declared, "I am formally retiring from reality TV shows. I've been on five Bachelor-related TV shows and it's finally time to hang up the roses." And he seemed serious about it, too.

For anyone in need of a Bachelor franchise history lesson, Chris first appeared on Emily Maynard's season of The Bachelorette in 2012. Then, he was the runner-up on Bachelor Pad Season 3. In 2014, he tried to be on Andi Dorfman's Bachelorette season, but she didn't even want to meet him when he showed up to the mansion. After that, he was a part of the first Bachelor in Paradise season followed by another BiP appearance the next summer.

That is a lot of Bachelor experience. No one could blame him for throwing in the beach towel. Or in this case, just taking a break.

Chris was very candid in his retirement speech. He admitted, "I'll be honest, I became obsessed with being on TV. It led me stumbling down a long, dark jungle path to embarrassment. I became a joke, but I kept coming back because I truly believed I could find love and fix my reputation on one of these amazing journeys." Ah, the word "journey," a true staple in the Bachelor world.

Ultimately, Chris concluded, "I finally realized that I will never be able to change the past. I apologize that you had to witness my struggle publicly over the last three years." Yet, here we are again.

Even though Chris Harrison retired a jersey with the number "five" on it, the franchise veteran is back for round six with a return to Bachelor in Paradise this summer. And so is his sense of humor. On July 2, Chris posted his cast photo and captioned it with "coming back for my pension in paradise." Michael Jordan came out of retirement, why not Chris Bukowski? Get that pension, which in reality TV, is really just a redemption story arc.

Last week, Chris shared a photo of his BiP entrance and wrote, "One more week until I limp my way back into Paradise," which he paired with a grandpa emoji.

And just to hammer the point home that Chris is far from "new" to dating on reality TV, he stumbles in on a walker during his Bachelor in Paradise intro. Truly epic.

Chris may be a new face to recent Bachelor viewers, but he has a long history with the show. When Season 6 airs, fans will see that Chris keeps getting invited back for a reason, many reasons, and that it was well worth it for him to come out of retirement. Maybe Season 6 will be the "journey" he has been hoping for all along.