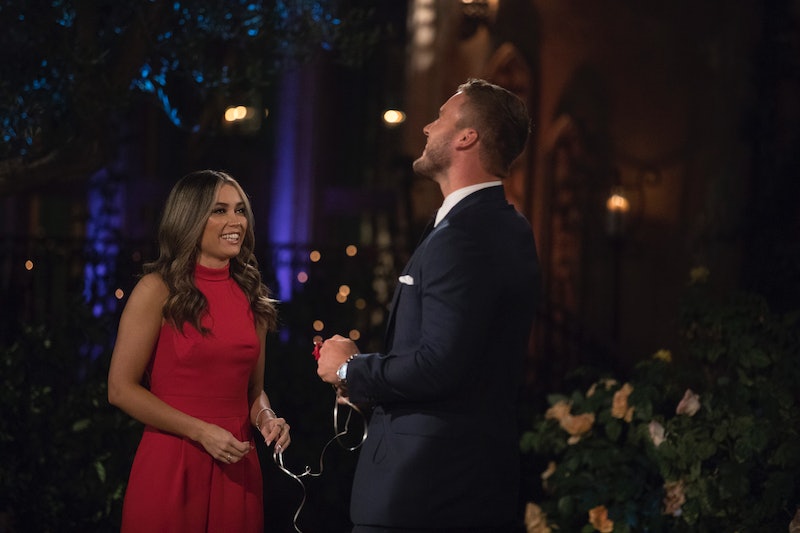 It happens rarely, but every once in awhile, a contestant will get sent home on The Bachelor outside of a rose ceremony, and sometimes, those sendoffs are truly the most brutal. On Monday night's episode, Colton sent Caitlin home during their group date, and it seems like the chemistry just wasn't there between them, even this early on.

It all started at the end of the date, when Colton was talking to people one-on-one. Before he had the chance to pull her aside, Caitlin told the other women that she was worried she hadn't had enough of a chance to talk to him and really make an impression on him, and that was the first thing she brought up when she and Colton finally did get the chance to talk. But at the same time, she also admitted that she didn't know what she wanted to talk about, and things went steadily downhill from there.

Talking to the cameras, Colton said:

Seems like Colton just wants to focus on the women he already has chemistry with, and he told Caitlin as much when she let her know that her time on the show was up.

"I was really looking forward to getting to talk to you tonight and tonight I was hoping would give me the clarity to sort of see exactly where our relationship could go. If I'm being completely honest, tonight I just didn't feel like that spark was there. I'm sorry. You're somebody who deserves the best, but I just don't think that you are for me, so I'd like to walk you out."

Caitlin didn't take the news very well, though, and once she'd gotten in the car to leave, she shared her thoughts with the cameras.

As bummed as Caitlin was, it makes sense that Colton would want to send someone home as soon as he knows it won't work — The Bachelor is a super speedy process, so why waste precious time when you know she's not the one for you? Now, he can pursue those other relationships, and Caitlin can find someone who's really into her. In the end, everyone wins.

"I feel like throwing me away that early was a really big mistake," she said. "He really needs to think about who's here for the right reasons. Life goes on, maybe he'll regret his decision eventually."

Only time will tell, of course. But fans will have to wait until After The Final Rose to find out whether Colton will regret this early season decision.