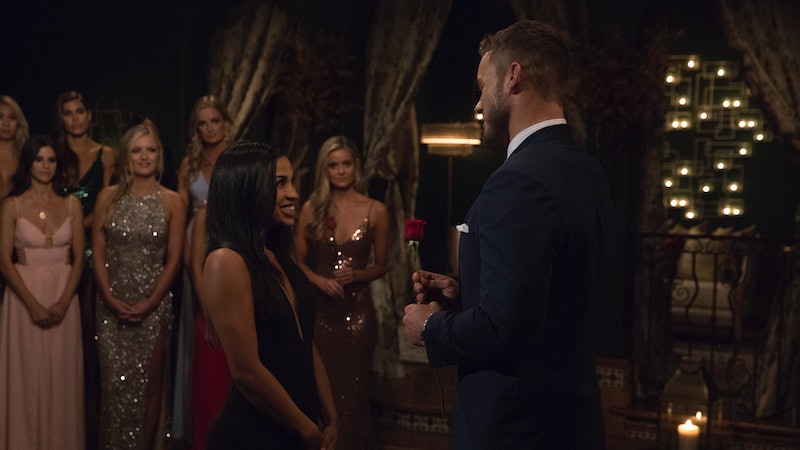 Now that we're more than a month into The Bachelor, it means that things are truly getting real — and that leaves Colton Underwood to figure out who he should continue his journey with and who he needs to say goodbye to. Unfortunately, that means making some hard decisions when the rose ceremony rolls around each week, and on Monday night's episode, that meant bad news for Katie. But why did Colton send Katie home on The Bachelor? It seemed like he just had stronger connections with other women.

Katie was, unfortunately, the only woman not to get a rose at the end of Monday's episode, but she wasn't the only one to leave. Earlier in the trip to Vietnam, Sydney decided to go home after realizing that she wasn't able to get what she was looking for in a relationship from Colton, and Colton sent Demi home early after she confessed she was falling in love with him and he realized he didn't feel the same way about her. At the rose ceremony, it was Katie's turn to go, and she didn't seem too amused by Colton's choice. In fact, when he tried to cover her head with his jacket because it was raining when he walked her out, she didn't let him.

Katie didn't seem totally blindsided by the fact that she was being sent home, though; in fact, she even told Colton that she knew by the body language he showed her that he wasn't feeling it like he was with the other women.

"There's so much I have to say. I don't actually think it's real right now," she admitted. "I knew there was a disconnect just by your body language, and my biggest fear was that you wouldn't get there because I have so much to give, and I wish that I would have gotten just a little bit of time to show you."

But Colton didn't want her to think he was sending her home because of something she did — just that it wasn't there between them.

"I want to let you know that you were someone who I was so excited about. But I felt like there was more to get out of it that I just didn't get," he said. "You know you're incredible, and you know how much you have to give, you know that."

And what really threw Colton for a loop? The fact that Katie dropped a little bomb of wisdom on him before she got in the car to leave.

"You have a great group of girls. And you know who's ready in there, and there are some who aren't," she said. "Be smart with the girls."

Being that both Sydney and Demi had said similar things to him before they left, those words officially seemed to make Colton paranoid.

"That's the third person that said there are people who are still here who aren't ready, and that's terrifying," he said. "That's my greatest fear in all this, that I'm gonna end up with somebody who's not here to be engaged at the end of this."

So who's not ready, and who is? Guess we'll have to wait for next week to find out. But if the promo that aired at the end of the episode is any indication, it seems like there's going to be a lot of drama along the way as Colton tries to find out.