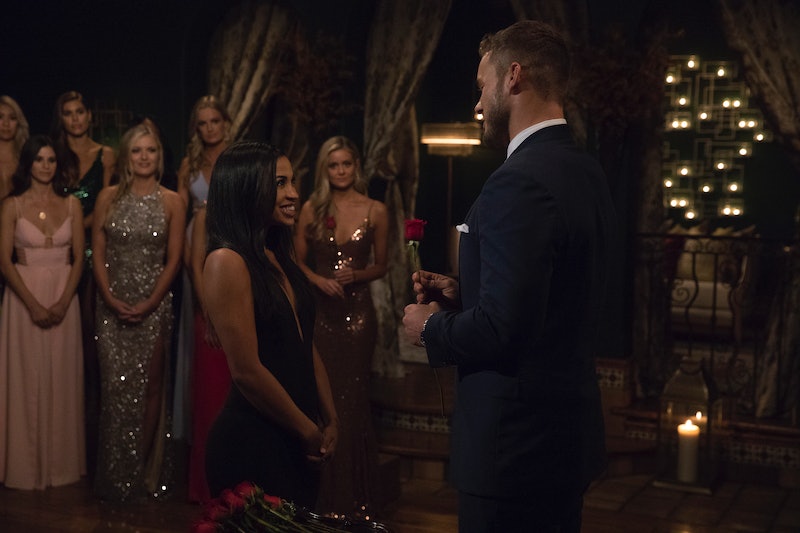 Somehow, it's already week six on The Bachelor, which means it's potentially getting close to proposal time for Colton. There are 12 girls remaining, and one of them is Katie Morton, who unfortunately, hasn't received much screen time thus far despite her beauty and charm. That begs the question, is Katie single after The Bachelor, or do things eventually heat up between her and Colton? So far, there's no reason Colton shouldn't see her as a potential partner, so it will be interesting to see if they get any closer, or if she's left without a final rose.

Fans speculated that Morton goes far in the competition when she appeared on The Ellen DeGeneres Show in September with fellow contestants Annie and Sydney. The feature gave them the opportunity to meet the bachelor himself before everyone else, and play a friendly round of DeGeneres' "Know or Go," a trivia game with a twist.

Unfortunately, Katie was the first to lose her spot in that little competition, but on The Bachelor, she's still going strong. She and Colton have a ton in common, so it's kind of a shock that, according to the show, they haven't spent much time together. She loves football, and spends a lot of time live tweeting professional games. She was also a member of her alma mater, Louisiana State University's Dance team, and according to her bio, would love to teach Colton some moves. She hasn't done that just yet, but she did use him to replace her teddy bear.

It's also obvious that Katie has a sense of humor Colton would appreciate. Instead of getting upset by her lack of screen time so far, she jokes about it on Twitter. "Me on #TheBachelor so far = ad libs and facials #Migos," she wrote. Notice she wrote, "so far." Perhaps she knows her time is coming?

Also, a fan pointed out that Katie's astrological sign is an Aries. "She’s really high energy," the account tweeted. "And goes for what she wants without drawing attention that could interfere w getting to her goal aka Colton." Katie quoted the tweet and responded, "Aries Szn, coming soon," with a kissy and excited emoji. That in and of itself was a very Aries comment, and could be a hint of foreshadowing regarding her future with Colton.

Katie also recently tweeted what could be another relationship-related hint, which is even more telling of her Aries status. On Feb. 7, she tweeted, "Valentine’s Day is going to be extra special this year," which seems like a huge nod to her love life. She could be spending the holiday with Colton and no one would ever know.

On the same day, she posted a selfie on Instagram. In the caption she talked about her love language. "i want to know: what’s your love language?" she wrote. "if you tell me yours, I’ll tell you mine." Katie, you're killing us! One follower commented, "Physical touch and Quality Time," and Katie responded with, "acts of service by a landslide!! Then physical touch and quality time time for second."

Why else would she be speaking her love language if she wasn't struck by Colton's — err — Cupid's bow? Regardless of who it's with, love is definitely in the air for Katie.