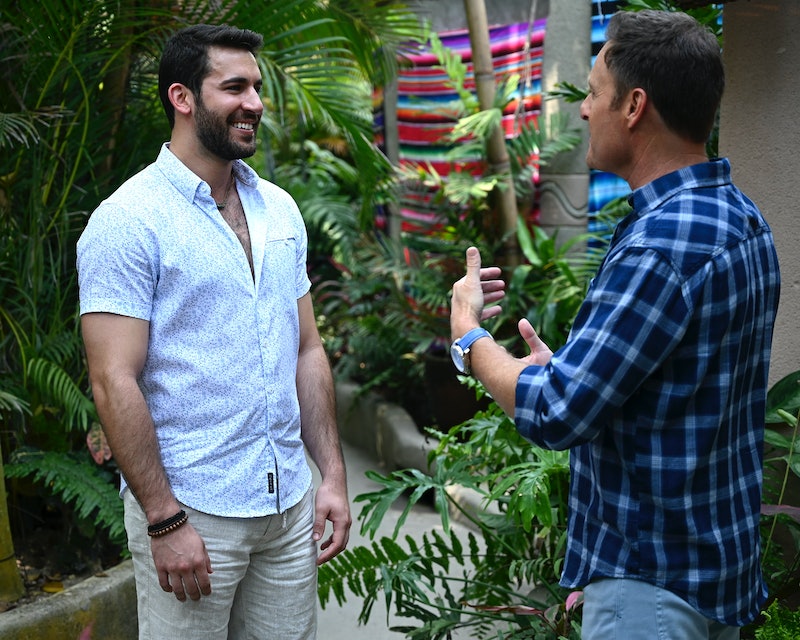 Bachelor In Paradise is in general a more relaxed, organic way to get to know one another than The Bachelor or Bachelorette, which has led to a number of successful, long-lasting relationships: Jade and Tanner, Carly and Evan, the recently wed Krystal and Chris. However, it's still a pretty accelerated timeline, and sometimes, things just don't work out. Such was the case with Derek Peth and Taylor Nolan's breakup.

Taylor and Derek, who met during Bachelor in Paradise Season 4, were one of those couples like Jade and Tanner who automatically got together and watched everyone else's drama unfold while sitting happily on the sidelines. In fact, things went so well that during the BiP Season 4 reunion, Derek decided to get down on one knee, whip out a Neil Lane ring, and propose.

"You're not searching for someone who completes you but someone who complements you. And I think we literally and figuratively do that," he said. "I choose to love you this minute, this hour, this day, and every day from here on out."

Taylor of course said yes, and things were going great until June 2018, when the couple ended their relationship with a statement to E! News. "It is with much sadness that we have decided to end our engagement. We put everything we could into our relationship and are heartbroken to go forward separately, but we know this is the best decision for the both of us," they wrote. "We will still be present in each other's lives with support, admiration, and respect for each other."

So what happened? It seems like it had a lot to do with distance: Derek moved to New York City at the end of 2017, just a few months after their engagement, while Taylor stayed in her hometown of Seattle, Washington. Having 3,000 miles between you can't be easy, and as Derek told The Morning Toast in July 2018, it did indeed come down to the fact that they lived on separate coasts and led very different lifestyles.

"I think that she didn't want to leave Seattle and she wanted to like, travel here and travel there and take advantage of some of this [Bachelor] stuff," he said. "And I got my job [in New York City], I have my normal week."

Often, it's exactly that kind of everyday stuff that gets in the way of Bachelor relationships. It's all roses and romantic dates until you get thrown back into reality and have to sort out how your two previously separate lives can work together. In the end, it seems like Taylor and Derek just wanted different things.

Luckily, both have moved on — Taylor is dating a guy she calls "Canada Man," and Derek can currently be seen crying in the trailer for the next season of Bachelor in Paradise. It's ironic that Taylor wanting to do more with Bachelor Nation contributed to their split and it's now Derek who's on the show again. Regardless, best of luck to them both — on screen and off.