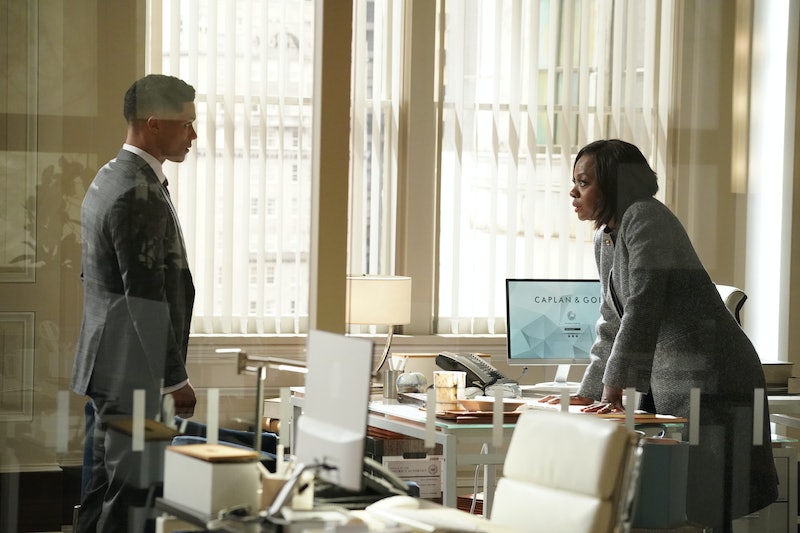 When Gabriel arrived in the How To Get Away With Murder Season 4 finale cliffhanger, everyone knew he had plenty of secrets. He had the look. Although he managed to seem somewhat normal throughout Season 5, his secrets are catching up to him finally. It seemed like he had nothing in common with the Keating 4, but now that it's been revealed that Gabriel killed his mother’s boyfriend on HTGAWM things are bound to change. Everyone knows, too, which means that Annalise (or someone else in the group) is going to use it against him.

Toward the end of Season 5, Annalise and Gabriel had a conversation about Paul Desoto, Vivian’s ex-boyfriend. Paul died of a drug overdose at 48 years old, but it was covered up. Flash forward to Season 6 and the Keating 4 also know about Gabriel’s alleged murder, because Gabriel told Michaela that he was the one that slipped Paul the drugs that allegedly killed him. When Gabriel’s mom, Vivian, showed up in town, Michaela spilled his secret to the rest of the group. The FBI is sniffing around, and things are tense, so she felt like all information was better off out in the open. (OK, fine: Things are always tense on this show, but especially tense now as HTGAWM comes to an end.)

Vivian’s arrival in town is a little too convenient to be coincidental, due to the fact that the FBI is investigating basically everyone Annalise spends time with. And since Michaela thinks Gabriel’s mother could be an FBI informant, it all sort of fits together. Now, Michaela has turned her sights onto Gabriel, too, because if Gabriel did what he said and killed his mother’s boyfriend, and someone knows that, Gabriel could be feeding information to the FBI about Annalise and the rest of the Keating 4 in order to absolve himself and his mother of any potential past or present crimes.

Who knew there was so much espionage and back channeling in the law school system?

If anything, Rome Flynn, who plays Gabriel, says that Gabriel’s alleged murdering his mom’s boyfriend could empower him in the eyes of the rest of the Keating 4, who aren’t sure if they trust him yet. “The playing field doesn't get even, but it does become a little bit more even when you figure out what Gabriel has done,” he told TV Guide. “He was a part of his mom's ex-boyfriend dying. We don't know if he did it on purpose just yet.”

How To Get Away With Murder showrunner Pete Nowalk insists that, like all the other plots in this show, Gabriel’s motives — including that of killing his mom’s ex-boyfriend — are very difficult to pin down. “His motives are complicated. We're going to start to wonder about who his mother is and what his relationship is with his mother,” Nowalk told TV Guide.

This is interesting because why did Gabriel kill Paul? Did Vivian put him up to it? Or was it to protect Vivian? How To Get Away With Murder viewers know so little about Vivian at this point that anything, including more murder, is a possibility as the show races toward its series finale.