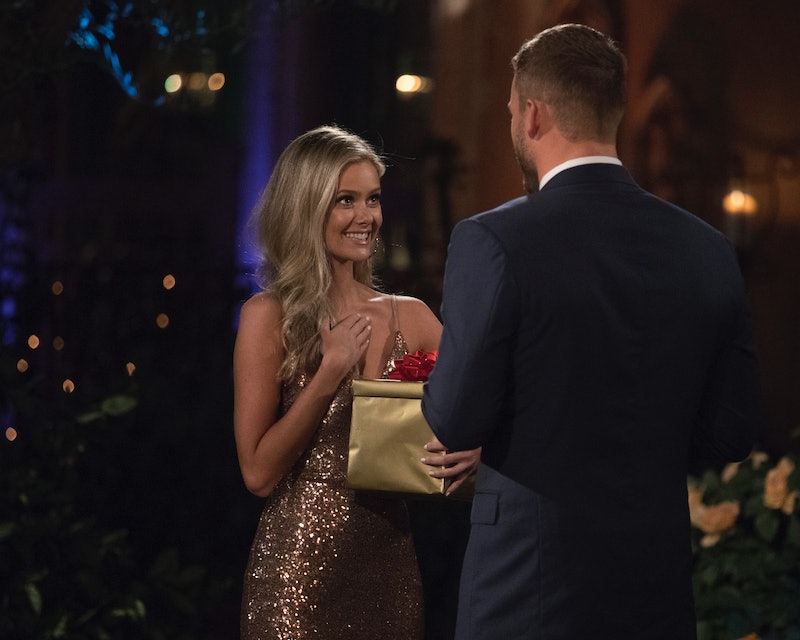 Every season, Chris Harrison says we're about to see drama like never before on The Bachelor, but boy did Colton Underwood deliver this time. Last week, Cassie left after Colton proclaimed his love for her above the other two remaining contestants — only for him to ditch the fantasy suite dates, jump over a fence, and chase after her. But what about poor Hannah G., who was left behind while all this drama unfolded? Why did Hannah G. go home on The Bachelor? You know, besides the obvious? What actually went down in Portugal?

On this week's two part finale, fans' curiosity was finally satisfied, and we finally got to see it all unfold, including what happened to Hannah G. Unfortunately, she was the only contestant who didn't get at least some semblance of a fantasy suite date. While Colton and Tayshia got to do the whole Bachelor tradition — the fun date during the day, the dinner, and the note from Chris inviting them to forgo their individual rooms, followed by a night spent one-on-one in a private suite together — Colton and Cassie only got through part of their fantasy suite date before it all fell apart. And Hannah G. didn't get any kind of date at all.

After Colton realized that he needed to follow his heart and go all-in if he was going to have any shot at getting Cassie back, he realized that he needed to say goodbye to his two remaining women, including Hannah G. She was expecting her fantasy suite date, but instead, Colton came to her hotel room to let her know that things were over, and that his relationship with Cassie was at a stronger point than his relationship with her, which totally blindsided her.

"I don't feel like this is happening at all," she said. "This is what I do. I make everybody better, and then they don't want to stick around."

And surprisingly enough, this is where Colton had his one moment of doubt — he didn't know if he was making the right decision, because he didn't want to lose Hannah, either. As soon as he left her room, he broke down in tears, because even though he was following his heart, it was still hard for him to walk away from someone he truly cared about.

When he and Hannah came face to face on After The Final Rose, she wanted to get her questions out of the way so she could move on. She asked him why he didn't give her more of a chance if he really did think that he'd end up with her. Colton admitted that week was a challenging one for him,

"With you, it was the realization of how much I gave myself to somebody else that I couldn't continue on knowing I wasn't gonna be all in because in that moment when I was having that conversation with Cassie, I didn't want to lose her and I knew I didn't want my life to go on without her in it, so I couldn't do that to you where you were a backup plan," he said, adding that she didn't deserve that from him.

Colton and Hannah's breakup definitely wasn't easy, but at least now they can both put it in the past. Hannah deserves an awesome person who will make her their first choice — and now, she can be free to find that person.