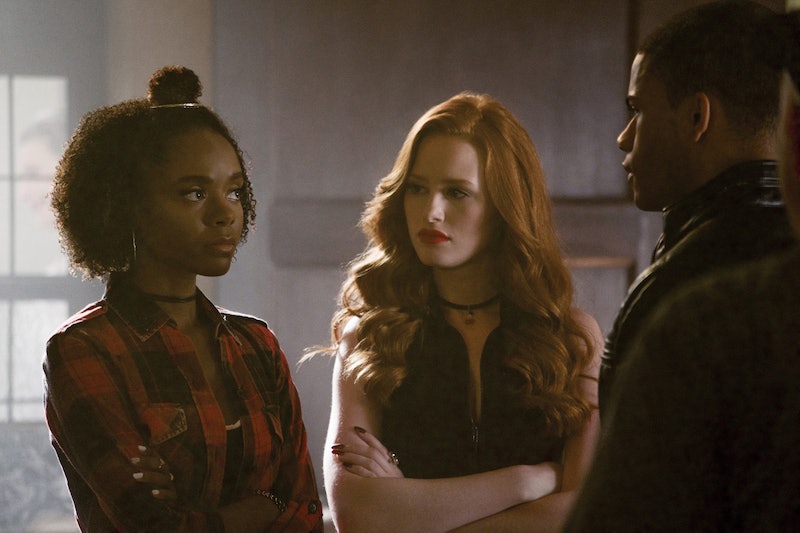 There's a long history of pop stars starting off in groups before striking out on their own, and Riverdale (written by: Britta Lundin, four episodes) has provided the latest example of a future pop star going solo. Following in the footsteps of Beyoncé and Camila Cabello before her, Josie has officially quit Josie and the Pussycats. Although, while other pop stars may have started a solo career of their own accord, Josie ended up being pushed out of the group that bears her own name. Their break-up happened so quickly, that some viewers may be wondering why Josie and the Pussycats broke up in the first place.

When she introduces herself to the many students who transferred from Southside High to Riverdale High, she announces that she's now, "Josie, formerly of The Pussycats." With so much discussion centered around the Black Hood, Jingle Jangle, the Southside Serpents, and the many other criminal activities happening in Riverdale, Josie's admission serves as a reminder that the Pussycats did, in fact, break up earlier in Season 2. While most break-ups on the show are long, drawn-out, emotional affairs that sometimes takes characters weeks to get over, the breakup of Josie and The Pussycats happened in the entirety of one scene in the episode "Tales From The Darkside." What happened that caused this band to split apart so suddenly? It seems the Pussycats could tell that Josie was thinking about going solo and ripped the band-aid off for her.

While The Pussycats seemed like a strong unit when Riverdale started, things have been pretty rocky for the band since Archie got hot. Archie threatened the fabric of the band by dating Val, who eventually left, and was replaced by Veronica. Val eventually re-joined The Pussycats, who from then on were a four person act. And also sometimes Cheryl Blossom performs with the Pussycats, but she may not be an official Pussycat. Frankly there's a lot of ambiguity around the definitive Pussycat lineup.

While Val and Melody seem to care about The Pussycats far more than either Veronica or Cheryl, that's not what led them to splitting up with Josie. Their problems arose when they received mysterious notes informing them that Josie had been writing music and practicing songs on her own. Then, Josie had been offered a one-time opportunity that she decided to take, causing Val and Melody to feel betrayed. While Josie tried to explain herself and explain that she still wanted to be a group, Val and Melody informed Josie that their decision was final and they would be removing the "and" from Josie and The Pussycats.

So, is this really the end of Josie and the Pussycats? Josie may be talented enough to have a career of her own, but she's never needed friends as badly as she needs them now. She's just lost her band, her mother is maintaining an iron grip on the town and her own life, and all the people she does hang out with are too focused on catching serial killers and trying to prevent gang violence to check in on her. There's simply never been a Josie that didn't have the Pussycats to be there for her, and it's not yet clear how losing that support system will affect her.

Although, considering the flexible line-up of the band, it's entirely possible that Val and Melody could learn to forgive Josie for her supposed betrayal. Or, if Josie was interested in going forward on her own, perhaps she could get Veronica and Cheryl to join her as her new Pussycats. They could probably write songs about the fact that all of their mothers are extremely powerful and essentially run the town of Riverdale.

Josie and The Pussycats may be over for now, but Josie will probably still be bringing music to Riverdale — even if it's on her own.