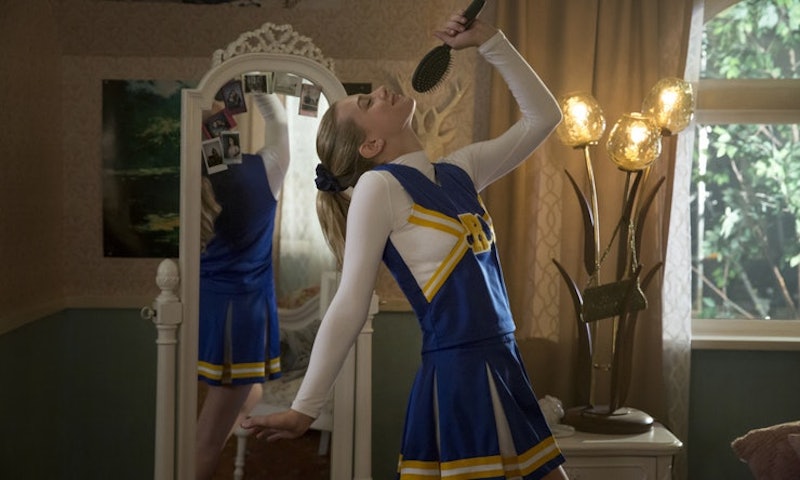 Riverdale will return on Jan. 17 after a winter hiatus with a lot of great new surprises and celebrity cameos for Season 2. And, although the news that Andy Cohen will make a guest appearance on Riverdale may sound a bit curious to some, the announcement was a joyous moment for fans of the Bravo TV host, who took to social media to express their excitement. According to Entertainment Weekly, Cohen's role on the popular CW drama means that he'll be portraying himself, and it couldn't be more fitting for the Watch What Happens Live star. Not only will he, most likely, have the opportunity to cozy right into his lovable and plucky on-screen persona, but the casting is a typical case of art imitating life.

The Real Housewives producer will once again be paired up with real-life pal Mark Consuelos when he steps into the world of Riverdale. Consuelos, who currently plays the role of Herimone's husband Hiram Lodge, and Cohen have been good friends for so long that there's no doubt that the shenanigans on set will be on par with some of the all of the moments during which fans have watched Cohen and Cosuelos ham it up in the past.

Though specific details concerning Cohen's role still remain unknown, EW reports that the 49-year-old Love Connection host begins shooting his cameo later this week. Per their report, he will enter the series as an "old friend of the Lodges who has come to Riverdale to offer Hermione (Marisol Nichols) a helping hand.”

Fans should have seen the news coming, because Cohen recently launched a campaign for a guest spot on the popular TV show. The segment, which ran during his Sirius XM radio show Radio Andy on October 2017, shared Cohen's fandom. The 48-second commercial kicks off with, "You've seen Riverdale, but you haven't seen Riverdale with Andy Cohen" before going into a full-fledged lobbying plea.

Though Cohen's guest appearance on Riverdale, which EW indicates is slated to air in March 2018, will by no means his first time starring in a guest role, it certainly seems to be the one that is most exciting to him. He made a similar cameo appearance in Season 3 of Unbreakable Kimmy Schmidt and in Difficult People, in which he also played versions of himself.

That said, Cohen appears to be completely overjoyed now that his Riverdale dreams are finally coming true. He recently shared his excitement with The Daily Dish, explaining: "I grew up reading Archie Comics and fell in love with Riverdale last year. Now they’ve offered me the part of my dreams — I get to play Andy Cohen!"

The Andy Cohen Diaries author also shared the news via social media, tweeting out the announcement, "I’M COMING TO #RIVERDALE!!"

But it appears that Cohen isn't the only one gushing about the forthcoming network crossover. Fans of both Cohen and the high school drama jumped to Twitter to share their thoughts on the collaboration.

1. Best of Both Worlds

One fan was elated to learn that Cohen would be making a cameo appearance on one their favorite shows.

Another commenter had a feeling that this was going to happen, as, honestly, we all should have.

Fire emojis helped this fan explain just how hot things are going to get once Cohen pairs up with Consuelos on Riverdale.

It seems that this viewer was totally here for the news.

5. It Makes Life Worth Living

While the news completely made this person's day.

This is just another dream come true for Cohen, and, honestly, this latest foray into primetime television should make a fun new addition to his ever-growing résumé in entertainment.