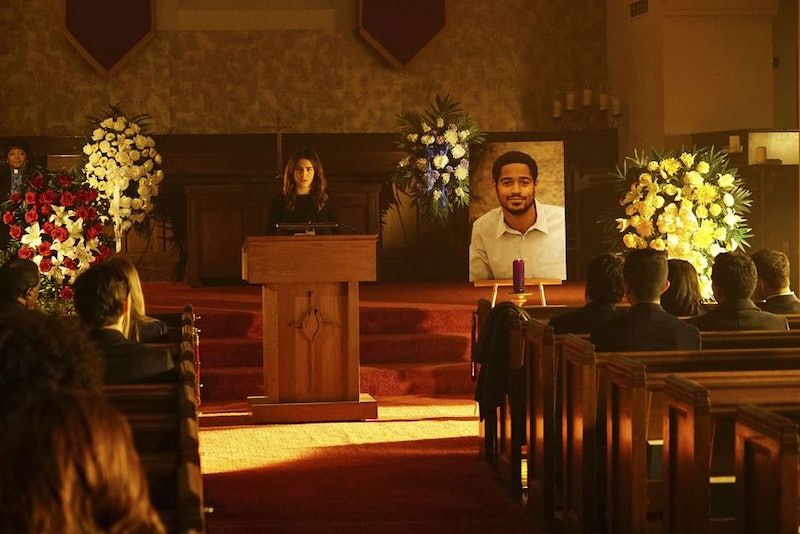 Well, hot damn, TGIT viewers! Laurel's dad killed Wes on How To Get Away With Murder, and that was a twist that not even I saw coming! It all looked like District Attorney Denver had orchestrated the hit on Wes in Annalise's house, but no, no — the person who the hit man was on the phone with was actually Laurel's dad, asking "Is he dead?"

I'm not an easily shocked person, but I have to say that that shocked me, because we haven't seen Laurel's dad since the beginning of Season 3. Laurel talked to him when she wanted to find Frank, and that was really it. In Mexico, he's a man with power, and that power must extend to the United States. So here's what happened — a hit man, whom we learn is Dominick, Laurel's family friend — stabbed Wes in the neck with a needle, but Wes fought him off... a little. He smashed a bottle over Dominick's head, but it did nothing but delay the inevitable, and then Dominick smothered Wes (poor Wes), cut the gas line, and exited, waiting for the house to explode. He then called Mr. Laurel's dad to tell him the job was done, even if it was a little messier than anticipated. Laurel's dad seemed satisfied with Wes' death, and that was that.

I'm very, very sure that Wes' death is about Laurel and not about Annalise. I'm not sure that Laurel's dad knew that she was pregnant with Wes' baby, but he could have found out or plain just not approved of her relationship with Wes. I know it's a stretch to kill your daughter's boyfriend just because he's your daughter's boyfriend, but this is How To Get Away With Murder we're talking about. It could happen. Perhaps he found out about the pregnancy and decided to nip this whole thing in the bud, or maybe it's a part of a larger scheme to bring Laurel back home, closer to her dad and her family empire. I guess we'll have to wait until Season 4 to find out.

More like this
Watch The Trailer For Netflix’s Edgy New Comedy 'FAKES'
By Brad Witter
Here’s The True Story Behind 'A League Of Their Own'
By Morgan Leigh Davies
'Euphoria' Star Jacob Elordi Reveals Why He Almost Quit Acting
By Radhika Menon
Does 'Locke & Key’s Ending Mean There Could Be A Season 4?
By Sophia Moore
Get Even More From Bustle — Sign Up For The Newsletter