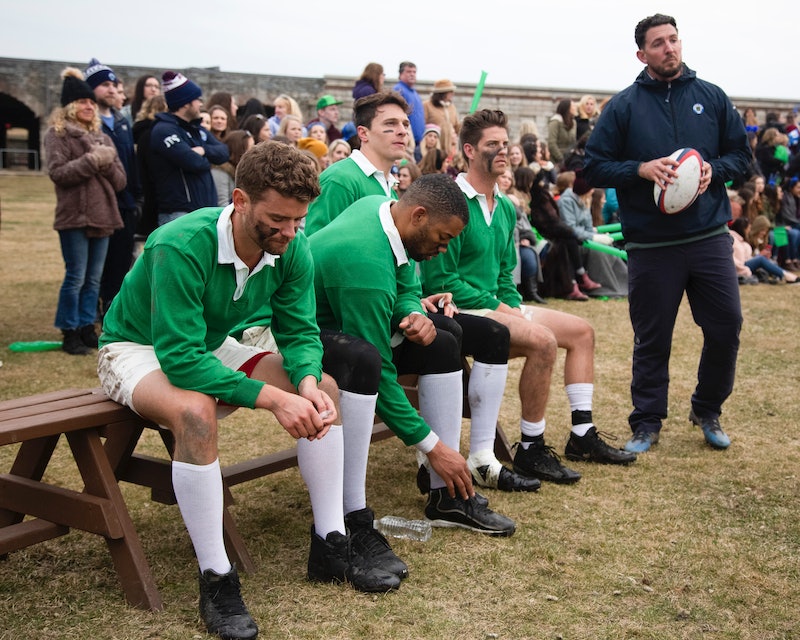 This season's Bachelorette drama started early this year for poor Hannah B., and on Tuesday night it led to a potential frontrunner leaving the competition. So why did Luke S. go home on The Bachelorette? As has the entire seasons so far, it revolved around Luke P.

The two Lukes got into a fight in last week's episodes during the group date's rugby match after Luke P., in Luke S.'s words, "decked" and "body slammed" him. The encounter wasn't caught directly on camera, but Luke P. apologized for it afterward. "This is like football. It's a contact sport," he said, suggesting that maybe these things just happen. But that didn't stop the rest of the guys from turning on him and insisting that Luke P. is "unstable."

Then, Hannah became involved in the drama. When she and Luke P. talked, Luke P. claimed Luke S. starting cussing at him and was about to swing. "I didn't know what to do, so I picked him up, and I put him on his back," he explained. Luke P. then started talking about the red flags he'd seen with Luke S., and that he was supposedly just on the show to promote his tequila line. Hannah then pulled Luke S. aside to get his side of the story.

"There was a play in which I passed the ball and Luke P. hit me pretty damn hard. He turned around and had this glazed look in his eye," Luke S. said, claiming that he just wanted to tell him it wasn't cool to hit him like that, but that he picked him up and slammed him. Luke S. also told Hannah that he definitely wasn't there to promote his business ,"which isn't even a business yet," and that the other guys have picked up on Luke P.'s abrasive personality.

Luke S. definitely wasn't happy that he had to waste his precious time with Hannah talking about Luke P. "It makes me so angry that I had to sit in there with a woman that I really, really like and defend myself over some garbage fed to her by some psychopath," Luke S. told Luke P. "I never want to see you again in my life."

The episode ended there, but on Tuesday night, it picked right back up in the middle of it. Luke S. and Luke P. continued to go at it, even after an exasperated Hannah walked out of the room. She then decided to end the cocktail party and go straight to the rose ceremony, but just before she could get started, Luke S. pulled her aside. He apologized for any drama or pain he'd caused, saying that it had been hard for him to have to defend his character. He then warned Hannah to be wary of the remaining men, and amicably left the mansion.

The worst part? Hannah still kept Luke P. despite his many obvious red flags, and the fact that all the other contestants outwardly hate him. Luke S. and Hannah probably just weren't meant to be, and he definitely could have concealed his temper a little better too, but it's frustrating that he went home over Luke P., who has been a problem since basically day one. Hopefully Hannah realizes it soon. It feels like Luke P. surely can't win Hannah's heart in the end — she knows better, right? But on the other hand, we've had some controversial winners in the past, and you really never know for sure. In the meantime, R.I.P. Luke S. — we hardly knew you.