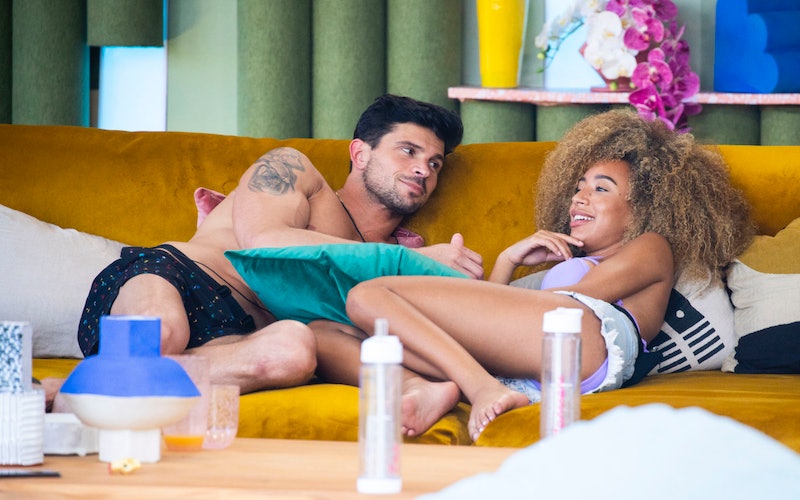 There are certain instances when being first is the best — when you're the first person on the moon, the first person in cool, fresh sheets, the first person with an exclusive pair of sneakers. One time when you don't want to be first, though, is getting sent home on Love Island U.S., like Michael during the July 12 episode. It had to be someone, and unfortunately, he just wasn't connecting with the women on the show.

It didn't have to be this way. When Michael first came on the scene way back... four days ago, he was hot to trot and definitely the man that all the women (minus Alana, who only has eyes for Yamen) were scoping out. But, much like the Fiji weather, things change very quickly in the Love Island house. Him and Alexandra, who he initially coupled up with, had agreed they weren't clicking, leaving him vulnerable when Dylan and Cormac arrived to mix things up — especially since Dylan and Alexandra were immediately feeling each other.

After Kyra recoupled with Cashel, leaving Caro hurt and single, Michael tried to explore things with her, and at first, she was interested. But as Caro told Dylan later, she didn't feel like she and Michael had anything in common, and that their conversations were "kind of boring." Ouch.

Michael just never seemed to vibe as deeply with the women as the other guys. Cormac and Dylan just showed up, and yet they were able to secure themselves more time in the Love Island villa — probably because Michael just wasn't putting himself out there enough. Yes, it takes a necessary amount of narcissism to want to be on television, but the first week of a show like this is always really, really tough. It's a huge group of new people, and from the first minute, you're sharing hopes, dreams, visions, fears... oh, and beds. That means you're sharing nighttime farts and snores and morning breath. That's like, months-into-dating stuff, when you're over being on your best behavior.

Like Shrek, Michael is an onion full of layers, and maybe he just wasn't comfortable with automatically having to spoon with everyone to see who he liked. As he said when he first arrived in Fiji, he may seem like a player, but that's the last thing he wants. He hadn't even been on a date in a year! Michael went on the show to find a real relationship, and unfortunately, the right woman wasn't there for him.

Don't worry too much about Michael, though — he's handsome, seems really kind, pretty smart, and fairly thoughtful. This hunk of a man is definitely going to land on his feet when he gets back to the United States. There will be women lining up for him. And if that doesn't work, hey — Love Island probably has more tricks up its sleeve. Maybe he'll make an appearance on the show again, because anything (really, anything) can happen on Love Island.