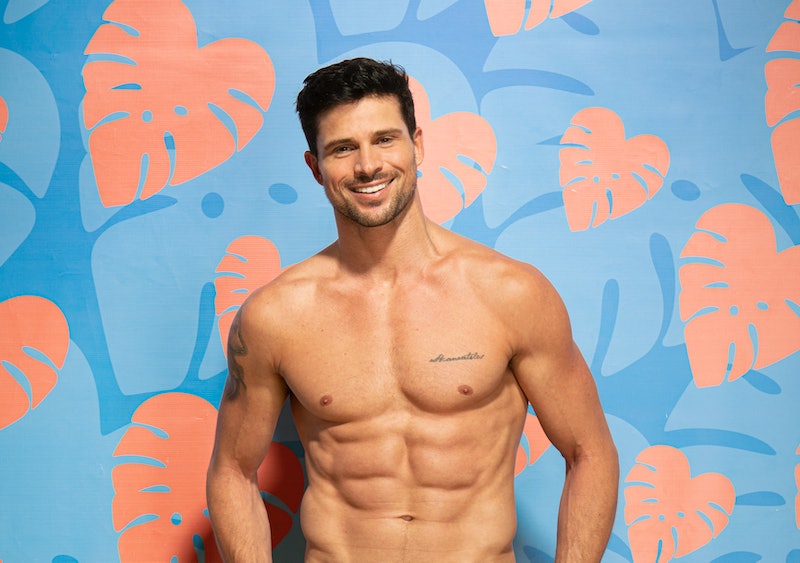 Fans of the British reality series Love Island will be ecstatic to know that the show is arriving across the pond. The U.S. version premieres Tuesday, July 9 on CBS and will air every weeknight, just like its U.K. predecessor. The reality series, which is hosted by comedian Arielle Vandenberg, is the perfect entertainment for the long, sweaty days of summer, where audiences get to see in real time which of the 11 contestants will find romance (or maybe just a good time). One such contestant on Love Island is Michael Yi, a model living in Miami.

According to his CBS biography, Yi's pet peeve is when women play hard to get. That said, "he doesn't want them throwing themselves at him either." Furthermore, since the 29-year-old is a model, he's traveling a lot and hasn't had a lot of time to look for the right girl. Hence: Love Island. "Michael is an old soul who doesn't spend time on dating apps. He prefers the old fashioned way... walking into a room and watching every head turn."

It's clear that he's proud of both his body and appearance, which will both be assets to him in a literal sea of hot people on the dating reality series. So while it's too soon to tell how well Michael will fare in Fiji, here are a few other things fans can learn about him ahead of time.

Michael frequently talks about his plant-based diet on Instagram, pointing out that veganism doesn't necessarily mean you're not getting the protein your body requires. In fact, he's already garnered himself the nickname #PlantBae.

Since Michael lives in Miami (and is a model), going shirt-less is kind of his MO. And since Love Island USA is filming in Fiji, fans should expect that trend to continue.

As the male model said in his intro video, "The weirdest thing that's happened on a date — chick sat in my lap, and she tooted on me." Apparently it made an impression on him, as he went on to say that they began dating. "And then we moved to Miami, she broke up with me, and that broke my heart," Michael recalled.

"My best quality is definitely making a girl laugh," Li said in his intro video. "That can hold everything together — keep everybody in a good mood." Michael only has one video on his YouTube, which is a comedy sketch about a guy who hasn't had sex for three whole days and is desperate to get laid.

He Has Two French Bulldogs

As he said in his Love Island intro video, "My dogs have not been my substitute girlfriend, but they have definitely filled in cracks. If a girl doesn't get along with my dogs, it's not going to work."

Not only did Michael mention the hobby in his bio, but he said in the Instagram caption that skateboarding was his sport of choice growing up. "It was a huge part of my life and I learned a lot through it and broke a lot through it," he wrote. "2 broken collarbones, numerous dislocated shoulders, multiple sprained ankles and tons of cuts and bruises." But despite all of these injuries, he said that "every single injury was worth it."

It's only a matter of time before audiences see how Michael will fare on the CBS show, but he looks to be one to watch.