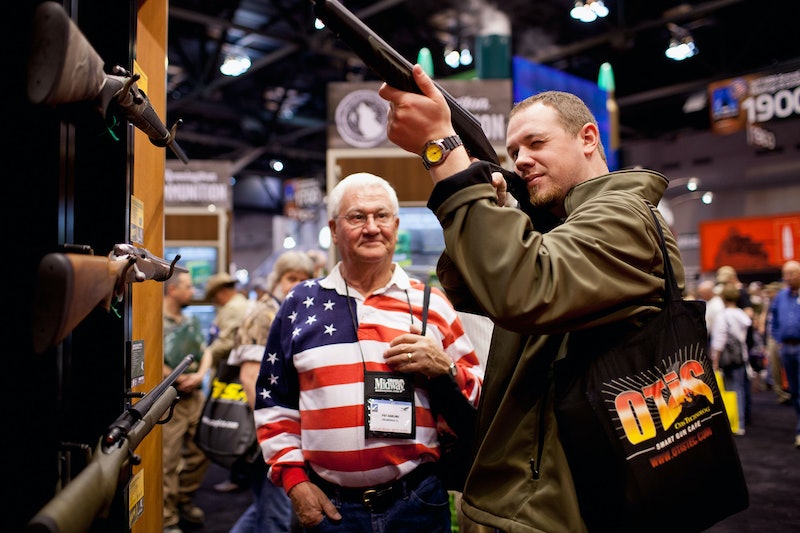 After the March for Our Lives on Saturday, the nation was met by big news in the gun industry on Sunday when Remington filed for bankruptcy. The official reasons cited were declining sales and a high debt load, but it might actually be the election of President Donald Trump that was the final nail in its coffin.

Remington is one of the oldest U.S. gun makers — founded in 1816 — with sales that reached $1.3 billion in 2013, but its corporate structure was complex. It was bought by private equity firm Cerberus Capital Management in 2007. The new owners united the company with other big gun manufacturers, ultimately creating a huge conglomerate.

That was good for profit, but after the Sandy Hook shooting, many investors decided to divest from the company. In order to buy out some of those investors, the company borrowed big time. In Sunday's bankruptcy filings, it was shown the company had between $100 million and $500 million in debt — the same amount as all the company's assets.

The debt wouldn't have been such a big problem if Hillary Clinton had won the election. Fear of gun control legislation likely would have spurred sales. But in the first nine months since Trump took the election, Remington sales plummeted by 27.5 percent.

That might seem counterintuitive, but it has been shown time and again that fear of gun control legislation spurs sales as gun enthusiasts buy up all the models they can before it's illegal to buy them. When Obama was president, nearly every mass shooting sparked a similar reaction — a run on the gun stores; the former president often spoke out about gun control, including an assault weapons ban.

Now that Republicans are in control and Trump is in the White House, that same fear doesn't exist. So even after a tragedy like the Parkland shooting, where 17 were killed, gun enthusiasts don't feel as at risk. Even with 800,000 student activists protesting in Washington, D.C., and more across the country, they know meaning gun control isn't likely to pass.

Jon Hale, director of sustainability research at Morningstar, an investment research firm, told The Washington Post the election of Trump interrupted the NRA's cycle of fear advertising. "The NRA scare tactics spur increased sales for the gunmakers, which in turn support the NRA financially. It all plays into everyone's hands," Jon Hale told the Post after the Parkland shooting. "Since Trump came into office, that threat has declined. At least until, potentially, now."

One more complication of the bankruptcy are the lawsuits tied to the Sandy Hook Elementary School shooting. Families of the children who were killed have taken a case all the way to the Connecticut Supreme Court to argue that the gun manufacturer is liable for the deaths.

A lawyer for the families argued in front of the court in November that the manufacturer's marketing was targeted at people exactly like the shooter in Newtown. He used a Remington AR-15 Bushmaster rifle to kill 20 elementary children and six adult staff members. As the attorney told the court, "They knew they were hitting their mark and [the shooter] was responding to their marketing."

It's unclear when the court will rule. An attorney on the case for the families said he doesn't expect the bankruptcy to change the outcome of the case. "We do not expect this filing to affect the families' case in any material way," the lawyer told The Hill.

But, ironically, there is hope on the horizon for gun investors. If Democrats make a comeback at the midterms in November, gun sales could bounce back, and shares along with them. Richard Feldman, president of the Independent Firearm Owners Association, told Bloomberg the company has had problems before and likely would again, but that it's cyclical: "I suspect that if the Democrats make a resurgence this November, gun company stocks will come roaring back with them."