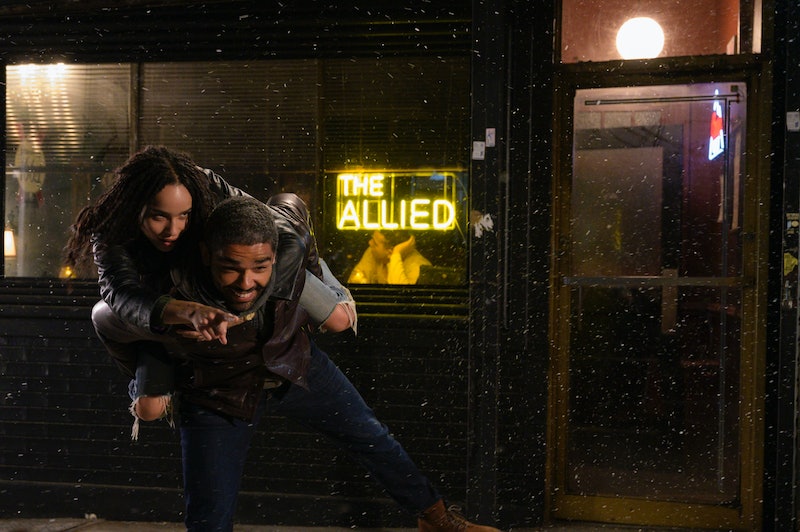 In the first season of Hulu's High Fidelity — a remake of the 2000 John Cusack movie — two questions linger throughout. Will Rob (Zoë Kravitz) ever stop, in her words, being an "asshole"? And why did she and Mac — the attractive, charming, no-red-flags guy she was engaged to before the series starts —break up?

The answer to the first question is an equivocal, "ehh...maybe?" In the series finale, Kravitz's myopic record store owner finally steps outside of herself to acknowledge that the people around her have wants and needs. She listens dutifully as Mac's current fiancée tells her off, sells an album she loves to buy a gift for a friend she's been neglecting, and attempts to start over with a new guy who seems deserving. That being said, these overtures seem out of character from the woman we've gotten to know over 10 episodes. The revelation that Rob has "always had one foot out the door" feels rushed and unreliable.

Unless, of course, you believe the answer to why Rob is an asshole in the first place can be found in the answer to question two: why did Rob and Mac split up? The story of their romantic relationship, which has been over for months by the time the show picks up, is meted out in flashbacks and the flittering discomfort of their present-day run-ins. But the totality of what went down between them isn't revealed until Rob's lonely, soul-searching 30th birthday in the penultimate episode.

By that point, we already know that it was Mac who couldn't be persuaded to stay on the night things finally ended between them. We also know that the night of their engagement was tumultuous. When Rob accidentally found the ring in Mac's drawer, she panicked, leaving the house under the guise of fetching cat food from the corner store only to head to the bar. When she finally returned home, she agreed to marry Mac. So what happened between the happy proposal and the teary goodbye?

It turns out that Rob — spinning from finding the ring — slept with someone else somewhere between the bodega and the bar and the betrothal. Yes, Mac was the one to call it quits, but the whys of the break-up are all undone by Rob's confession. Mac left because he could tell that Rob was pulling away from him. In reality, her coldness was a consequence of the guilt she felt. What Mac sensed wasn't rejection, but secrecy.

Mac, whose wedding is only weeks away, is thrown by Rob's admission that she cheated on him, but it ultimately doesn't change what's happened in the year since they broke up. The two kiss, but neither remember what it feels like to be inside the relationship. When they part this time, they seem to do so with the clarity to truly move on. For Rob, that translates to a renewed ability to be a good friend, a good aunt to her new niece, and perhaps even a good girlfriend to someone new. In other words, she can stop being such an asshole. But it's a somewhat unsatisfying ending. In seeking to explain Rob's selfishness as the chaotic reverb of her breakup with Mac, High Fidelity avoids the question of why Rob cheated in the first place.

More like this
Here’s What Happens To Bill & Frank In 'The Last Of Us' Video Game
By Brad Witter
The 'Gossip Girl' Reboot Creator Is “Looking For A New Home” To Air A Potential Season 3
By Brad Witter
'That '90s Show' Is Officially Coming Back For Season 2
By Gretchen Smail and Grace Wehniainen
The Plane Crash In 'Dear Edward' Is Based On A 2010 Tragedy
By Grace Wehniainen
Get Even More From Bustle — Sign Up For The Newsletter
From hair trends to relationship advice, our daily newsletter has everything you need to sound like a person who’s on TikTok, even if you aren’t.