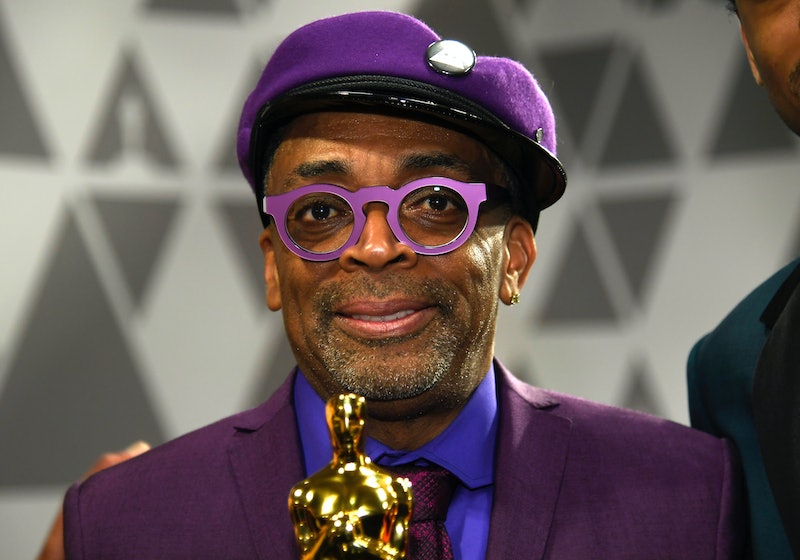 Spike Lee was thrilled when he won the Best Adapted Screenplay award at the 2019 Oscars. But when the winner of Best Picture was announced, he was less than thrilled. So, why did Spike Lee try to walk out of the 2019 Oscars? It looks like he tried to leave the show after Green Book took home the biggest award of the night.

Sources who were at the ceremony on Sunday, Feb. 24, shared that the BlacKkKlansman director tried to leave the auditorium when Green Book's win was announced. Citing an unnamed source from the event, Deadline tweeted of Lee:

"We're hearing from an insider that when #GreenBook was announced the winner, Spike Lee was 'clearly furious.' He was pacing the aisle and stormed to the back of the auditorium. When he came back, he turned his back to the stage during the speech."

"Spike Lee was visibly angry when 'Green Book' was announced as the winner of best picture at the Oscars, waving his arms in disgust and appearing to try to storm out of the Dolby Theatre before he was stopped at the doors. He returned to his seat when the speeches were over."

After his apparent attempt to storm out of the theater, Lee went backstage for the requisite winner's press conference. There, he answered a reporter's question about Green Book's win. When one journalist asked Lee what he thought about the Best Picture winner, he proceeded to take a sip of the Champagne he was holding, before saying, "Next question!"

During another interview with reporters at the Vanity Fair Oscar party, Lee said that Green Book wasn't his "cup of tea."

"I'm snakebit. Every time someone's driving somebody, I lose," Lee told reporters backstage after the show, according to Variety. The statement is an apparent reference to the 1990 Oscar ceremony, when Lee's film Do The Right Thing lost the Best Screenplay Oscar to Driving Miss Daisy. Explaining his physical reaction to the win, Lee added, "I thought I was court side at the Garden [Madison Square Garden] and the refs made a bad call."

The director is far from the only person who was upset about Green Book's triumph. There's been plenty of backlash to Green Book's winning Best Picture, and the movie's been mired in controversy for months. The family of Dr. Don Shirley, Mahershala Ali's character in the movie, wasn't happy with how the film portrayed him and Green Book has also been accused of promoting a white savior narrative — not things you particularly want in your Best Picture winner.

And in addition to the movie's content, there's been backlash against Green Book because of the reported actions of some figures behind the scenes. Director Peter Farrelly faced criticism for exposing his genitals to actors he'd worked with in the past, for which he has since apologized. And Green Book writer Nick Vallelonga came under fire for an anti-Muslim tweet from 2015. He also apologized after the tweet surfaced.

After Lee won an Oscar for BlacKkKlansman last night, it's understandable that he'd be upset about Green Book's win. That said, he definitely wasn't going to let another film's success bring him down. He did walk away with an Oscar, after all. Even as he was answering questions backstage about Green Book, it seemed like the director was having a pretty good night, and that's what he really deserved.