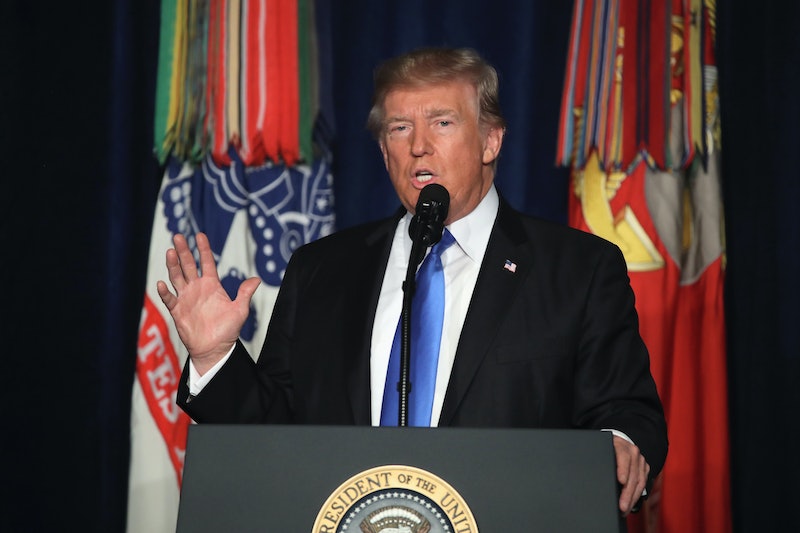 Before President Donald Trump addressed America Monday night to announce his plan on Afghanistan, his administration spent months educating and advising him on the situation and the potential ramifications of certain actions. And according to a report from The Washington Post, one such example of convincing Trump to continue the war involved an unusual tactic. The Post reported that national security adviser H.R. McMaster showed Trump photos of Afghan women in miniskirts in the '70s, meant to demonstrate to him that the country was once influenced by Western culture and has the potential to return to that one day.

During his primetime speech Monday, Trump announced plans to send additional troops to Afghanistan. While Trump gave the Pentagon the ability to send a few thousand more troops, he didn't give an indication on a number and said that the White House will no longer talk about specific troop levels, citing conditions on the ground as a new gage for decisions. The White House separately confirmed that about 4,000 soldiers could be sent to Afghanistan.

Trump also opened up military restrictions to give military leaders more autonomy, voiced his hope that the Taliban would eventually come to the negotiating table, and threatened to cut off aid to Pakistan if they didn't work to reduce terrorist safe havens, according to CNN.

According to Quartz, the photo in question may be of three Afghan women walking in Kabul wearing miniskirts, which was taken in 1972.

The reports that McMaster used a photo of women in miniskirts to sway Trump is on its face a somewhat alarming tactic for an adviser to convince the president to continue fighting in a 16-year war. However, other reports of Trump's presidency are also unprecedented.

A May report in POLITICO revealed that his aides make an effort to make sure Trump's media diet includes praise and positive stories to keep him happy. Also in the report is the nugget that staffers have slipped him certain news in an effort to sway him on various topics. And negative press or leaks can make him angry.

A few days after the POLITICO report, Reuters published a story sourced by anonymous officials claiming that the National Security Council members frequently include Trump's name in memos in the hopes that mention of himself will get him to read more. It also claimed that Trump prefers single page briefs and visual aides.

Given the previous reports about how Trump is briefed about important and sensitive topics, it's not terribly surprising that an adviser would use a photo of women in miniskirts to represent Afghanistan's past and help the president imagine what the country's future could be like if he were to send additional troops.