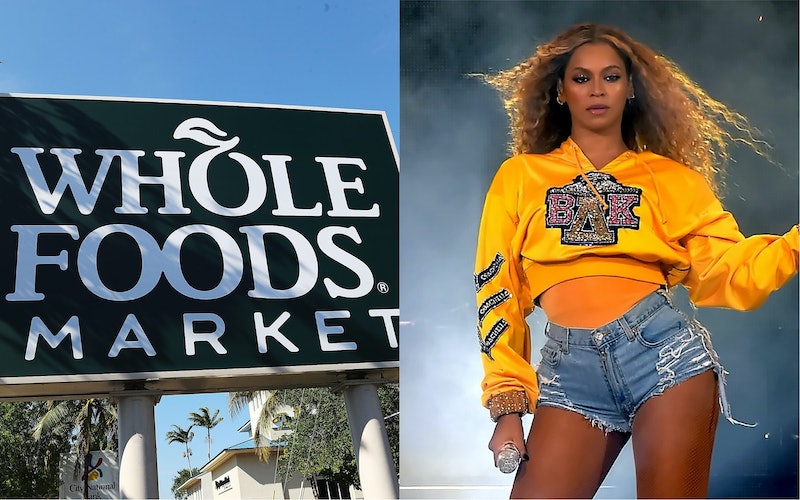 Deleting all of your Instagram posts is akin to unexpectedly moving across the country — it's an extreme measure that'll have people wondering whether you're going through a hard time. It's why people are worried that beloved supermarket Whole Foods has deleted all of its Instagram posts. Naturally, the Internet is trying to figure out why. Here's what we know so far: The brand once had thousands of posts, but now we can only see three posts, and they're all white squares. In the comments, people are speculating about what's going on and whether we're being trolled. Other commenters said they felt bad for the social media employees tasked with archiving thousands of posts. (Bustle has reached out to Whole Foods about its Instagram, and will update when the reason for the changes are confirmed.)

Whole Foods was once following more than 4,000 people, according to Instagram tracking tool Social Blade, and casually unfollowed everyone to only follow Cardi B, Sting, and Beyoncé. The brand's bio was changed to a bee emoji as well, which led people to wonder whether a particularly zealous member of the Beyhive hacked the brand's account to advertise Beyoncé's new album. Since it's been almost 24 hours since the account went dark (or light, depending on how you look at it) and Whole Foods hasn't said anything, it's safe to say that it's probably a marketing ploy.

But what's being advertised? Is Whole Foods releasing the hottest mixtape of all time? Will we hear Cardi B and Sting on the same track? While this would be unarguably amazing, it's not the prevailing fan theory. Romper's senior social media editor Suzanne Samin revealed her genius theory on Twitter, and it makes a lot of sense. Is it all a ploy to save the honeybees?

I'm no detective, but there's a lot of promising evidence to support Suzanne's theory. The most relevant piece of information: This week is National Pollinator Week, a holiday dedicated to appreciating the insects who pollinate our plants. It isn't just bees, either. According to National Pollinator Week's official website, the holiday has grown "into an international celebration of the valuable ecosystem services provided by bees, birds, butterflies, bats and beetles." And Whole Foods has shown itself to be passionate about pollination before.

There's an entire page on the company's website dedicated to honeybees, and my guess is that Whole Foods is making a point about which products we'd have left if bees disappeared. You may swat a bee if one flies too close to your face, but they're an essential part of our ecosystem. If all of the bees in the world disappeared, we'd experience a hunger crisis unlike anything we've seen before. But bees aren't going to vanish overnight — we've seen a steady decline in bee populations due to colony collapse disorder and industrial pesticides. The biggest issue we have is our collective indifference to what's happening around us. Regardless of how annoying you find bees, they do a lot for our planet, and raising awareness about the importance of pollination is a good thing. If this is what Whole Foods is after, they'll likely receive a lot of positive feedback.

Of course, there's a possibility that all of our guesses are wrong — for all we know, the brand could be introducing a new beeswax-based product and getting fans hyped for it. Or maybe there is a Whole Foods-sponsored single coming from three unlikely superstars. We won't know the answer until the brand indulges us with an explanation. Until then, people will continue to speculate online — I'm pretty confident in my guess, but like any good mystery, there's no way to know who's really solved it until the big reveal.