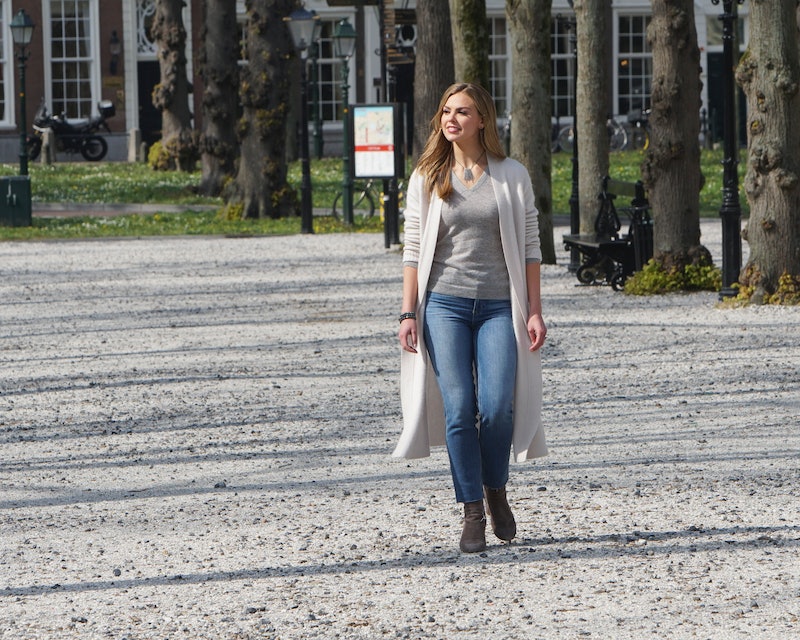 Hannah has had a rough go as the Bachelorette, mainly due to some drama among the men that she just can't seem to squash. But despite the distractions, she's continued her journey to find love, and managed to make some difficult choices along the way. However, on Monday night's episode of The Bachelorette, Hannah didn't send anyone home, meaning that after meeting the families of all four remaining men, she was still torn. This could either be a huge mistake that just further confuses her, or it could be exactly what she needs to figure out who she wants to be with.

When it came time for this week's rose ceremony, Hannah was stressed. She said she was "there" with all of the men in regards her own feelings, and that she hoped hometowns would grant her more clarity than they did. "[Hometown dates] were really good, but all so different. It's like, how do you compare apples to oranges to kiwi to cantaloupe?" Hannah told host Chris Harrison. "There's no true frontrunner in my head, or someone who's falling behind... It's truly like, I don't know where I'm at right now in my emotions. I'm hoping when I walk in there I'll just know what to do."

She gave the first two roses to Peter and Tyler, but when faced with choosing either Jed or Luke P., it proved too much for Hannah. She left the room without handing out the final rose, and cameras caught her crying in the hallway.

"I don't know if I've had the time to know who my person is here. I need more time... I don't feel like I'm diving in the way I could with any of these relationships the way I know I can," Hannah told Harrison. "Now it's like I'm going to close a door on a relationship that's not done, and I don't want to do that."

Eventually, she came back to the room, and revealed that she couldn't give out a single final rose — she was giving out two instead. "I want to continue on with all of you," she said.

The main reason Hannah's decision to keep everyone after hometowns is so shocking is that Luke P. is still there, and we're likely going to see a fantasy suite date for one of the most controversial contestants in Bachelorette history. It's essentially impossible to see him as a long-term partner for Hannah, especially given his possessive and aggressive behavior.

But believe it or not, this might actually be a smart move on Hannah's part. If she felt like she needed more information to make an elimination, this was definitely the right choice. She needs to be able to finish her journey with no regrets, and this might be her way of doing that.

We can all debate the worthiness of some of the remaining men, but in the end, this is Hannah's decision, and it makes sense that she'd want to have as much information as possible before making a choice. Though it's been a bumpy road this season, she's taking this experience seriously, and she doesn't want to doubt herself later. Hopefully, whatever next week brings will be enough for Hannah to narrow down her suitors and get closer to that final rose.