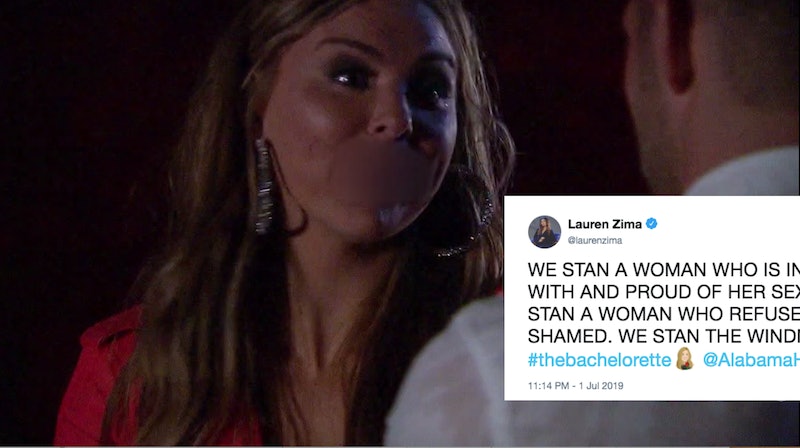 Without a doubt, the best moment from Monday night's episode of The Bachelorette wasn't even from the actual episode. It was the preview for upcoming episodes that had all of the viewers talking (and tweeting). During an intense confrontation with Luke P., Hannah Brown says she "f*cked in a windmill" and the internet went wild.

Leading up to that moment, Luke tells Hannah, "Let's say you have had sex with one or multiple of these guys, I'd completely remove myself from this relationship." Does he not know what show he's on? The premise is about forming and exploring multiple relationships. So much for enjoying a romantic dinner, huh? After getting up from the table, Hannah tells Luke, "My husband would never say what you've said to me." And then she utters the most unforgettable line from the original trailer for this season: "I have had sex and, honestly, Jesus still loves me" — but that's not all.

As much as viewers have been looking forward to that moment, Hannah blessed the fandom with another iconic quote: "From obviously how you feel, me f*cking in a windmill, you probably wanna leave." Wait. What?

Then Hannah made her point very clear during her on-camera interview. She told the viewers, "I f*cked in a windmill. And guess what? We did it a second time." Good for you, Hannah and whoever. But hopefully it's Tyler C. or Pete the Pilot. You can't fit a guitar in a windmill, right? Let's hope not.

Hannah truly is the gift that keeps on giving. The preview concludes with Luke P. hopping in a production van with Hannah holding up her middle finger. She took her (hopefully) final stand against the "5'8" villain" and she promoted sex-positivity at the same time.

Now there are just so many questions. How long until we get to see this Luke P. confrontation? Who did she f*ck in a windmill? Did it happen while the cast was in the Netherlands? Is there a windmill at one of the hometown dates? Is there a windmill-themed fantasy suite coming up? Did she do this pre-Bachelorette? When is someone going to start printing this line on a t-shirt or coffee mug?

Just search the word "windmill" on Twitter and it is all about The Bachelorette. No hashtag necessary.

Did anyone else have to rewind that scene to be sure about what she said? Yes, it was a windmill.

2. Did She Do Something "With" A Windmill?

Once again, the "rewind" button was very helpful watching this preview.

4. There Are So Many Questions

We are going to need a timeline of events.

That line will go down as one of the most iconic quotes in Bachelor franchise history.

Yes, Hannah! Do what you're comfortable with and be proud of it.

7. She Eclipsed The Fence Jump

Colton Underwood's fence jump got a lot of hype during the last Bachelor season. This is just so much juicier, especially with all the mystery.

8. Did This Happen During Hometown Dates?

There's no better way to kill time before meeting the parents than to check out the local windmill, right?

Hey, it would totally work.

10. Please Let This Be About Tyler C.

Please let this be about Tyler C... or at least not Jed. Anyone, but Jed.

Peter and Hannah managed to bring steam to a sauna during their one-on-one date in Latvia. Why not a windmill?

12. Did This Already Happen?

Maybe this isn't about the hometown dates or the fantasy suites. Did this already happen earlier in the season!?

13. There Was A Windmill Shown During Jed's Date

No. No. No. It isn't Jed, right? Maybe it actually would have been better if he had his guitar with him. Just this one time.

14. The Line Is Legendary

As hard as it's been to watch Luke P. get this far on the show, this moment was well worth it and it hasn't even aired in its entirety.

Hannah's season of The Bachelorette is full of action (pun intended). She's not the Bachelorette that fans expected, but the one they needed. Hannah has the support of Bachelor Nation behind her, even if she lost Luke P.'s.