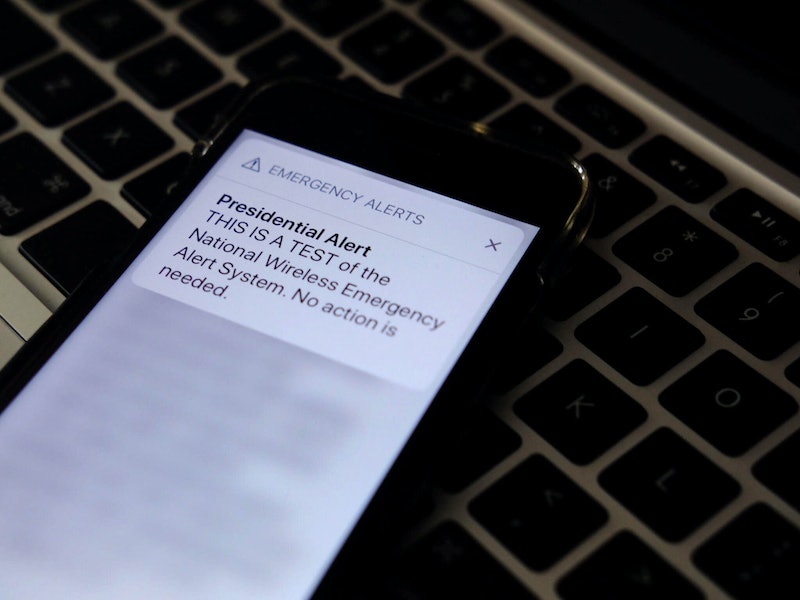 In what some are calling a dystopian move, President Trump sent a text message to everyone in America on Wednesday, ostensibly to test FEMA's National Wireless Emergency Alert System. At least, that's what was supposed to happen. In reality, though, not everyone got Trump's presidential text message alert, and it's not entirely clear why.

FEMA's website says that "WEA compatible cell phones that are switched on, within range of an active cell tower, and whose wireless provider participates in WEA should be capable of receiving the test message." But after the 30-minute window of time in which the messages were supposed to be sent, some people whose phones appeared to fulfill all of these criteria reported that they hadn't received the text.

In a statement to Bustle, a FEMA spokesperson says that the alert was successfully sent, and suggests that users with "active data sessions" open on their phones may not have received it.

The alert was sent out between 2:18 p.m. and 2:48 p.m. ET, according to FEMA. Those who did receive it saw the following message on their phones:

THIS IS A TEST of the National Wireless Emergency Alert System. No action is needed

FEMA estimated ahead of time that almost 75 percent of all cell phones in the U.S. would receive the alert, according to Fox News. It was originally scheduled to be sent on September 20, but it was delayed on account of Hurricane Florence.

When it was announced that FEMA would be sending a presidential alert, three New Yorkers sued the administration in an attempt to stop it from happening, arguing that the alerts could become "government loudspeakers" used to transmit political messages or outright propaganda.

The law that governs the alerts states that only messages concerning "a natural disaster, act of terrorism, or other man-made disaster or threat to public safety," as well as test messages, may be sent under the system. However, the plaintiffs in the lawsuit said that this was "unconstitutionally vague" criteria, given that any president or administration can "define 'act of terrorism' and 'threat to public safety' as they see fit." The lawsuit is currently pending in court.

Meanwhile, some followers of the pro-Trump conspiracy theory QAnon cheered the presidential alert, believing that it would soon be followed by the mass arrest and prosecution of Trump's opponents or, failing that, some other major action that would benefit the president. Earlier, the Daily Beast reported that QAnon supporters wrongly predicted that the presidential alert would ring in the immediate confirmation of Supreme Court nominee Brett Kavanaugh; however, under Senate rules, Kavanaugh's nomination isn't eligible to be put up for for a vote until Saturday at the earliest.

More like this
Romance Authors Are Mobilizing For Reproductive Rights
By Natalia Perez-Gonzalez
New Coins Unveiled As King Charles III's Reign Gets Underway
By Sam Ramsden
How To Turn Off Night Mode On Your iPhone Camera
By Emma Carey
Behind The Hilarity Of The "POV: You Walk Into My Room" TikTok Trend
By Lexi Inks
Get Even More From Bustle — Sign Up For The Newsletter