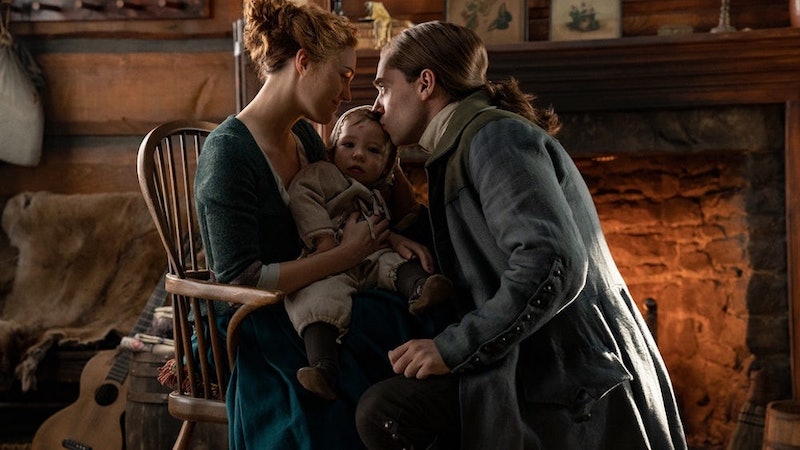 Spoilers ahead for the Outlander Season 5 finale. Despite all of the goodbyes exchanged during last week's episode "Journeycake," the Outlander Season 5 finale brought Roger, Brianna, and Jemmy right back where they started: the past. They had planned on heading back to their lives in the future, knowing full well there's a dangerous revolution to come, but the stones didn't work. Talk about anti-climatic.

So what exactly went wrong here? The stones (and time-traveling in general) has never failed any of them before, but it doesn't seem like they didn't work so much as had other plans. Apparently, the stones realized that Brianna and Roger weren't ready to leave the 18th century just yet. They both said they'd wished to go "home" as the stones whisked them away, and that's exactly where they went: the place they now consider to be home, back with Jamie and Claire.

And it's a good thing they did, as they were able to come to Claire's aid following her abduction. This also helps to set up Brianna and Roger's storyline for Season 6. Those who read the books the series is based on know that (book spoiler alert!) Brianna and Roger do eventually go back through the stones, but it happens much later, in the sixth book, A Breath of Snow and Ashes. And their incentive for doing so is much greater than the half-hearted attempt we all just witnessed.

After Brianna gives birth to their second child, Amanda, Claire discovers that the baby has a congenital heart defect that requires medical assistance Claire simply cannot provide. In order for their daughter to survive, it's crucial that Brianna and Roger return to the 1970s, which they end up being able to do successfully.

It's unclear why the show's writers decided to give the couple this side detour that basically amounted to nothing, but at least it gives them a little more time to be with Claire and Jamie as a family. Because if those cryptic daydreams that Claire experienced during her brutal abduction are any indication, Brianna and Roger's future may be much darker than any of us realized.