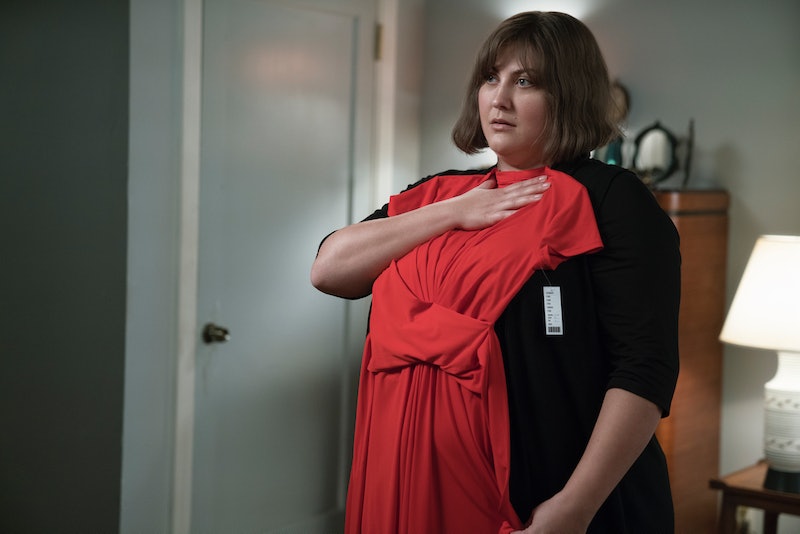 When I first heard about the AMC series Dietland, I wrote it off. The title made my stomach sink like a stone; nine times out of 10, the word “diet” makes me squeamish. I’ve gotten so used to seeing casual fatphobia in everything from New Girl to documentaries like What the Health? (something that LUSH Cosmetics customers called out when the company scheduled a showing last year) that I just assumed Dietland would fall into the same toxic tropes. Even allegedly fat-positive media like I Feel Pretty struggles to get past the writers’ internalized fatphobia and microaggressions in order to sell its message.

Then I actually watched Dietland, and I found myself not only riveted by the story, but empathizing so hard with main character Alicia “Plum” Kettle that I sobbed through the last five minutes of episode three.

Dietland, which is based on the Sarai Walker book of the same name, follows Plum (Joy Nash), a ghost writer for the editor of a major fashion magazine (Julianna Marguiles), as she works to lose weight so she can qualify for bariatric surgery. As Plum struggles through “Waist Watchers” meetings and desperately tries to get her editor to recognize that she’s a talented writer deserving of her own byline, she’s contacted by a mysterious woman who may or may not belong to a guerrilla women’s group known as "Jennifer" that’s murdering known rapists and throwing their bodies from airplanes onto the streets of New York City. It’s both an incisive critique of weight-loss culture and a #MeToo fever-dream plot, and it’s, of course, incredibly timely.

But what sets Dietland apart from other fat-positive media is that it’s actually fat-positive. The series is dedicated to showing how Plum is not defined by her fatness, even as it depicts in excruciatingly accurate detail the microaggressions she endures daily because of her size, as well as how her opinion of her fatness affects how she moves through the world.

Dietland acknowledges that not all fat people want to lose weight — and furthermore, that those who do want to lose weight don’t always want to do so to “release the thin person within” — yet another demeaning trope that suggests size is an indicator of decency or worthiness to live and be happy. It also does something that I’ve never seen another piece of media do: it acknowledges that fatphobia is a form of violence. It presents fatphobia against women as another form of degradation, humiliation, and violation, especially when it comes in the form of street harassment, unwanted touching, and/or “concern” from total strangers. While "Jennifer" murders men who got away with repeatedly raping women and girls, Plum struggles to make her loved ones understand that although she isn’t just a fat woman, the fact that she is a fat woman affects every other part of her life. And that’s something we don’t get to see often enough, especially in a way that doesn’t tokenize or dehumanize fat folks.

Although Plum is eager to lose weight, there are several integral moments of self-actualization throughout the first three episodes in which she talks about her body hate and where it comes from. Plum speaks candidly about the first moment she realized she was “too big”: a kindergarten anecdote about a chubby boy who wouldn’t kiss her during a playground game because she was fat. After she goes through a terrifying withdrawal period from quitting antidepressants cold turkey, she says that flushing her pills made her feel things again, and feeling things made her realize that she doesn’t actually hate herself. She just hates the way people look at her, hates that she has to apologize to the person beside her on an airplane, hates that she doesn’t know if men who ask her out for coffee are actually into her or are just fat fetishists.

“The world hates me for being like this. Every day I walk around in this skin, people look at me like I have the plague. They act like I’m a stain. They stare and laugh and yell and worst of all, they tell me I have such a pretty face,” Plum says, in a devastating speech that ends episode three. “And then they lecture me on how I can fix my body, because how I am is wrong.”

Fat folks are constantly told that we can fix our bodies. We’re told that our bodies are problems in everything from doctor’s offices to ads for plus size clothing. Words like “flattering” and “shapely” neatly package suggestions for how to solve the problem of our bodies. Doctors suggest weight loss as a solution to every problem, often ignoring important symptoms that need immediate treatment — like the fat woman who suffered for years and saw multiple doctors, only to eventually find the one who diagnosed her with cancer. She ended up needing to have her entire left lung removed.

For Plum, weight-loss surgery is a means to a new life wherein she can shed her “luscious” nickname and simply be Alicia. In her mind, Alicia is a traditionally beautiful, thin woman, and she’s happy. Plum’s mom and her friends continuously reiterate the potential complications from such a procedure in an effort to discourage Plum from getting the surgery, but she fights back tooth and nail. She wants to move through the world in a way that isn’t informed entirely by her size — something that thin, able-bodied folks are able to do without a second thought.

Plum is easily one of the most nuanced, interesting, and fully developed fat characters I've ever encountered on TV. As a fat woman, Plum is her editor's "hidden resource" — literally. She works remotely and writes under someone else's name. When she's asked to cover a plus size fashion show "because she knows the market," she's told to watch the event on Facebook Live and the magazine will send "one of the regular girls to show support.” She can’t fathom that the cute guy at her friend's cafe is totally into her, because why would he be? No one has ever been before.

From what I’ve seen of the first three episodes of Dietland, the show is so far doing an incredible job of representing the fat struggle as a multi-layered issue. Still, it’s not perfect. The writers seriously missed an opportunity in not having bit character Janice (Bethany Kay) — who walks out of a “Waist Watchers” meeting in the pilot because she says that she loves herself and wants to lose weight simply to help with her back problems — act as Plum’s introduction to “Jennifer;” having several thin women encourage Plum to “love her body” and “radicalize” definitely feels out of place and a little trite, especially as a fat audience member.

Although these women are part of “Jennifer” and seem to firmly believe that being thin is of no importance to leading a full life, the fact that they don’t know what it’s like to be fat simply underscores Plum’s frustration with her friends who insist that she’s being overdramatic about what she sees as a need for bariatric surgery. The series also doesn’t deal particularly well with the realities of people who rely on medication in order to manage their mental health — something we stigmatize in separate but similar ways to how we stigmatize weight.

But despite those flaws, Dietland has plenty of content worth sticking around to see. It will be interesting to follow Plum’s journey — and see how she processes microaggressions, weight loss, and potentially, involvement with “Jennifer.” I pray that the series maintains the nuances it’s established so far, because we need them. Fat representation is so rarely well done, and I, for one, am tired of searching high and low for a series I can love, full stop.