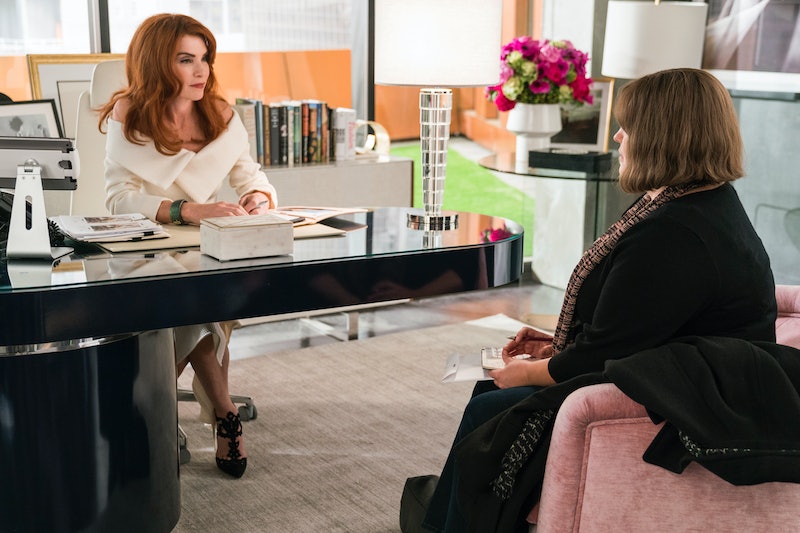 It may still be winter, but that doesn't mean you can't look forward to the seasons ahead — especially when spring and summer are bringing plenty of new shows, books, and movies. One summer project you'll want to keep on your radar is AMC's Dietland, which hits the small screen in June and dropped two teaser trailers on Thursday — coinciding with International Women's Day. Based on Sarai Walker's novel of the same name, Dietland looks like it will subvert rom-com tropes, all while promoting self-acceptance in the process. And at least one character is actively working to smash the patriarchy.

Dietland focuses on the world of women's magazines, but it's not quite like what you've seen on screen in the past. Plenty of rom-com characters are writers at women's magazines — despite the fact that in reality, media companies have seen layoffs and downsizing for years now. And Dietland's two main characters, Plum and Kitty, are a writer and editor, respectively, at fictional beauty and fashion magazine called Daisy Chain.

But unlike the way women are portrayed in too many magazine rom-coms, these two aren't clueless or vapid or out to get each other. Instead, Plum, played by Joy Nash, joins a feminist collective group, and there's no mention of her pursuing a man in the trailer. And in a promotional video for the show, Julianna Margulies describes her character, Kitty, as a woman who "smashed her way past misogynistic men to rise to the top" at the magazine.

The two promo videos for Dietland that have been released so far don't give a ton of information about what exactly Plum gets herself into outside of work. The trailer depicts Plum as a woman who often lacks self-confidence. And somehow, while walking to what Margulies describes as a "diet program," Plum finds herself joining a "radical group" that takes it upon themselves to punish men who've mistreated women. "Punishing rapists and harassers is fair game," Nash says in the Dietland promo. "Some people might call that fighting back." Margulies agrees, calling the vigilante acts "every woman's fantasy."

The show's revenge-driven storyline feels especially relevant in the #MeToo era. Obviously, killing or attacking men is not the right way to achieve equality ever. This is a fictional TV show, after all. But it is refreshing to see two vastly different characters fighting for equal rights in their own ways. While Plum pursues equality outside of work, Kitty works for her own women's rights in the publishing sphere. Nash describes her costar's character as "narcissistic" and "terrified of aging," but if Kitty did fight her way to the top at a male-dominated company, there's definitely more to her than meets the eye.

The series looks like it will tackle a toxic aspect that can come with the beauty and fashion industries, too. Nash mentions "unrealistic standards" in one of the promos — and too often, the worlds of beauty and fashion can perpetuate those standards. Seeing airbrushed models on magazine covers can dampen anyone's self-confidence. It's easy to see how working in the industry could take a toll on Plum. As The Cut pointed out, a 2012 study published by Bloomberg suggested that two-thirds of American women are plus-size, but that reality is rarely reflected when it comes to the beauty and fashion industries. And while no one is confident all the time, it's not too difficult to imagine why Plum feels frustrated in her workplace and looks for an outlet elsewhere.

Dietland looks like it will tackle a variety of issues that affect people of all genders. And if these promos are any indication, it's going to be hilarious while doing so, even if the subject matter is often on the darker side.