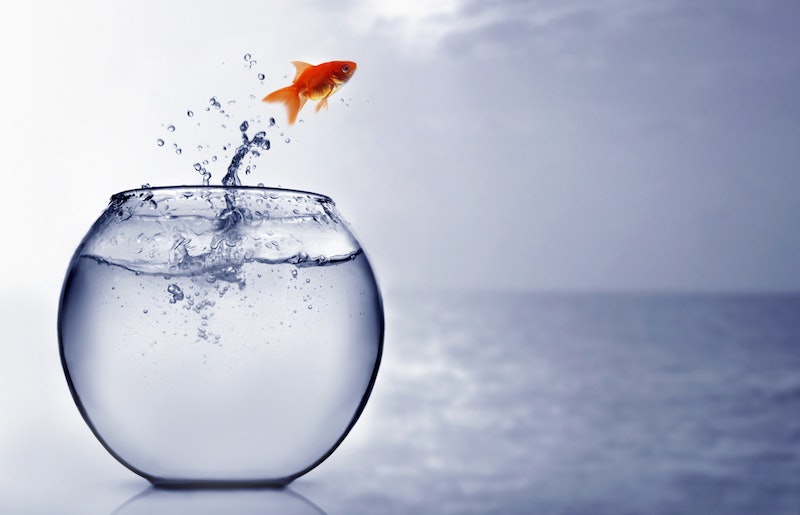 Owning a goldfish can be tricky. They require more care than it seems like a fish would need: you have to clean their water regularly, feed them on a daily basis, and make sure they're happy enough in their little tanks. Oh, and they have a tendency to leap out of their bowls to face potential death on your dresser. That's definitely the toughest thing to handle! If you don't want your goldfish to do this (because who would, really?), you first need to figure out exactly what's going on with them. There's a scientific reason goldfish jump out of their bowl, and there are also a few theories out there.

According to Aquarium Fish Bowl, if your fish jumps, it could be your fault.

I know. It's heartbreaking. But it's true, and perhaps all the more reason to avoid keeping a goldfish as a pet if you're not versed in taking care of them. Goldfish might jump out of a bowl that doesn't have ideal living conditions for them in an attempt to save themselves. If the water temperature is off, it could cause them to search for something different. The site says goldfish do best with temps between 65 and 75 degrees. As water temperature rises, fish get more active, and if the water gets too hot, your red could just jump right out of the tank — it might be because of all of the extra energy, or it could be because they're desperately trying to cool down. To ensure the temperature stays ideal, get an aquarium auto heater to maintain it, and don't leave the bowl in the sunlight or near a heater.

The fish could also jump if the water is too dirty for them. When the water gets too dirty, there is such a buildup of oxygen that it can actually poison your goldfish. The little guy may jump out of the tank in an effort to survive. Make sure you're cleaning and changing the water on a regular basis to keep this from happening.

There are other theories too: your goldfish might get really stressed about something (yes, fish can get stressed!), and jump. They could get really excited over something, like mating with another fish, and jump too high and accidentally end up out of the bowl.

The scientific reason? One biologist, Daphne De Freitas Soares from the University of Maryland, did a study on guppies to find out why goldfish jump. Soares analyzed their jumping behavior and discovered that fish started from a still position, swam backwards, then changed direction and flew into the air. She said jumping serves an "important evolutionary purpose as it allows them to reach all the available habitats in mountain streams." Basically, it's evolution. It's the goldfish's attempt at getting away from potential predators.

The study was limited, of course, since it was only on guppies. Still, it's the closest thing we have to a scientific reason for why goldfish jump to their death on occasion! Soares also pointed out to IB Times UK, "In terms of there being any other reasons for fish to 'jump' (besides those stated in the paper: prey capture, migration, predator avoidance, dispersal), it is possible that jumping behavior could be used as a last ditch attempt to escape an unsuitable environment." So, seriously, clean your fishbowls.

More like this
If You Have Pets, You Probably Don't Realize You're Making These Common Mistakes
By Mackenzie Edwards
Here’s Your Daily Horoscope For November 30, 2022
By Mecca Woods
Here’s How To Find Your Spotify Wrapped
By Emma Lord and Emma Carey
The Moon Tarot Card Wants You To Seek Clarity
By Nina Kahn
Get Even More From Bustle — Sign Up For The Newsletter