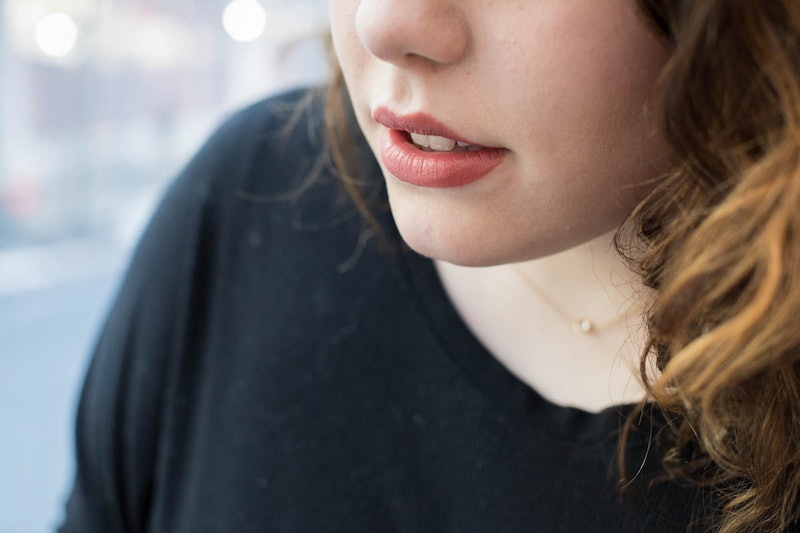 You've likely had an experience where you've been so sure about something right up until the moment when it's about to happen. Suddenly you do an about face and decide it's really not what you want at all. Why do you change your mind at the last minute? The answer is based in what psychologists call the decision apex — that moment when you must decide if you actually really want to get married, or accept that job offer.

Picture a triangle. One side is basically your "pro" list and the other side is the "con" list. The both start out equally at the base of the triangle, but as you get closer to making a decision the pros and cons rise to the triangle's point at different rates. And, once you are actually offered that "dream job," all of the cons can suddenly rise at once — swiftly knocking down the pros.

Perhaps this is why making actual pro and con lists is not a bad idea. Sometimes it's easy to get caught up in the fantasy of something without really considering the reality of it. For example, maybe that dream job also comes with a sexist boss, a soul-sucking cubicle, and a nightmare commute. Suddenly, it's not so dreamy after all. If you find yourself changing your mind a lot, there are few ways to help you make better decisions and stick with them.

Just like the old Schoolhouse Rock videos tout, knowledge really is power. "You can’t decide what school to go to, whether to take the job or buy the house by mulling about it while sitting on a couch, or looking at pictures of houses online," Robert Taibbi L.C.S.W. advised on Psychology Today. "Instead, you’ll get most clear by getting as close you can to the decision. That means gathering as much real-life information as you can — visiting prospective schools, standing in living rooms, walking around the building of the new job, 'getting the feel' of the place, talking to other workers. The environment, the immediacy will help crystalize your feelings."

I've totally been there. Several years ago, I was sure that I wanted to move back to Ohio and re-ignite a relationship with an ex-boyfriend. I found a headhunter to help me find a job. At first, she didn't want to take me on because she said "no one really wants to move to Ohio." I assured her that I did. I was positive. Except I wasn't.

When I got there, everything felt totally wrong. I was offered a job at an ad agency where I could live out my Peggy Olson Mad Men dreams. But, the owner was ultra conservative, which was a huge red flag for me. When I looked at places to rent the only thing I could find that would take my German shepherd was something called a Lustron house, a house style made completely out of steel (the walls and everything) that was popular after WWII. And that ex boyfriend? I spent one day with him and realized that it definitely was not going to work out. Oops.

Life Has A Big Learning Curve

This experience was a huge lesson for me. I had built up this perfect new life in my head without investigating the reality of what it would actually mean. I completely ignored any negative emotions surrounding my decision, which Taibbi noted as a big no-no.

"Pay attention to your reactions, both positive and negative, however subtle, all along the way," Tabbi wrote. "Don’t rationalize that the commute won’t be that bad, when some part of you senses that it might be awful. Don’t talk yourself into believing that you can 'make it work' when looking at a house 100K over your budget."

If I'm honest with myself, there were red flags every step of the way. That ex-boyfriend had a serious substance use problem, which I chose to ignore even though it was one of the main reasons our relationship didn't work out the first time. And that headhunter was right: I really didn't want to move to Ohio, especially to work for a conservative boss. Luckily I was able to realize this new "dream life" was a big mistake before I officially packed my bags.

Listen To Your Gut

But, Tabbi warned that for impulsive people like me rash decisions can lead to buyer's remorse. "If you tend to be impulsive, you’re likely a person who races from the bottom of one side of the triangle to the top is five nanoseconds. This sprint to the top is what causes buyer’s remorse, or filing for divorce two weeks after the wild Las Vegas wedding," he noted. "It may be a good idea to learn to slow your pace so the other side has a chance to catch up."

There have been plenty of other times when I ignored the con list and ended up in some pretty unfortunate situations, like a marriage that never should have happened. If only I had known about the triangle back then. If you too have followed a bad decisions to an unfavorable conclusion, don't beat yourself up too much. After all, the goal is progress not perfection.