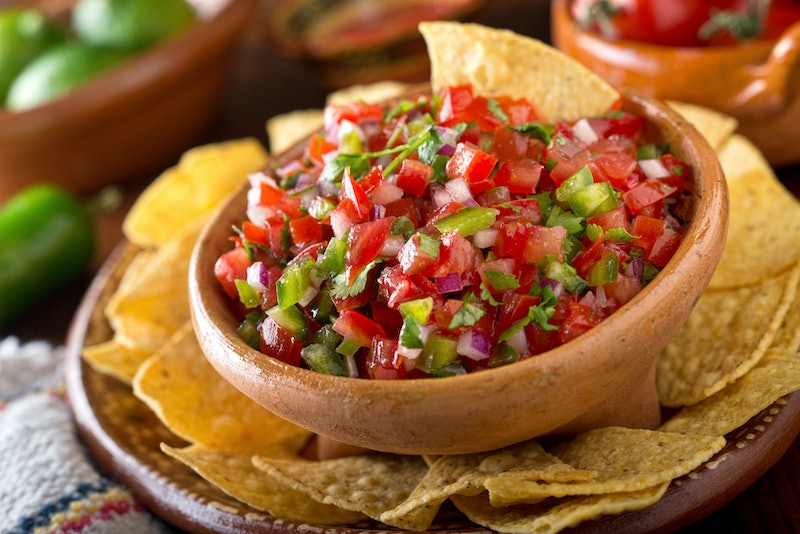 I've never felt strongly about cilantro one way or another, but it's one of those foods that takes a certain kind of palate to enjoy. In fact, some people hate cilantro so violently, they claim it makes everything it touches taste like soap — and though taste can be acquired, it turns out that's not exactly the case here. If you're wondering why some people hate cilantro, a new PBS video explains that cilantro hatred is actually based on a very specific genetic mutation, so you can thank your parents and grandparents for ruining shrimp tacos for you forever.

PBS produced a cilantro gene explainer as part of their "Reactions" video series, delving into exactly how tastebud X-Men are birthed. An estimated 10 percent of people hate cilantro, according to a study published in Flavour in 2012, and while tastes, textures, and preferences obviously differ for everyone (put a raisin near me and I will physically attack you), the cilantro phenomenon is actually fascinating. Cilantro haters don't just dislike the taste of the herb, which to the majority of the population has a tart lemon-like kick. To them, cilantro has a completely different taste (and smell, which some people say is like bugs or raw meat), which is very different from my, once again, absolute violent dislike for the squish and saccharine sweetness of a raisin. Seriously, keep raisins out of my bread, or I will lose it. Something as beautiful as bread should never be sullied by something as terrible as a raisin.

Admittedly, the most I remember from high school biology is how to spell "mitochondria," so even this explainer makes my eyes glaze over a bit. Still, there's a lot to appreciate here, and not just that they describe cilantro as the "Benedict Cumberbatch of toppings," which is a simile that truly speaks to me.

But as PBS explains it, though some of the cilantro-hating population just don't care for the taste, a subgroup genetically "can't help but hate it" — a finding that was written up in that same study from Flavour. For that subgroup, a small mutation in DNA, dubbed a single nucleotide polymorphism, or SNP, has screwed with a gene residing in their eleventh chromosome — that gene, which scientists suspect is OR6A2, is an odor detector that has to do with taste and smell. In rodents, OR6A2 binds with aldehydes, which are molecules that exist in cilantro, and if OR6A2 has mutated, then it will detect cilantro's odor differently.

For most people, two compounds that help make up aldehydes — decanal and dodecanal — give cilantro an earthy, sweet smell. But the e-2 alkanals also present in the aldehydes give off a soapy smell, and if you've got the mutation, you may detect more of the e-2 alkanals than the decanal and dodecanal, hence why, to you, cilantro smells like trash. Smell and taste are closely linked, so if your odor detector is off, so is your taste.

It's still not clear why the mutation happens, or exactly how, but it is fascinating that one little herb can be perceived so differently from person to person. What hasn't been dug into, though, is why some people don't think cilantro has any taste at all, myself included, while others think it gives food a kick. Julia Child famously declared in a 2002 Larry King interview that cilantro gave her a "dead taste," and to me it tastes like basically nothing.

Anyway, if you're suffering from genetic cilantro acrimony, there's some small relief. According to food writer Harold McGee, who addressed the cilantroversy in a 2010 New York Times column, crushing up cilantro leaves will release the enzymes that make up the soapy taste — or you can just skip cilantro altogether.

More like this
On TikTok, Orange Wine Is The Varietal Of The Summer
By Madeleine Aggeler
This TikTok Hard Seltzer Hack Involves A Milk Frother
By Alexis Morillo
Is The Insta-Famous Always Pan Actually Worth It?
By Jessica Goodman
Taco Bell Announced A Crunchwrap & Tostada Made With Cheez-Its
By Emma Garza
Get Even More From Bustle — Sign Up For The Newsletter