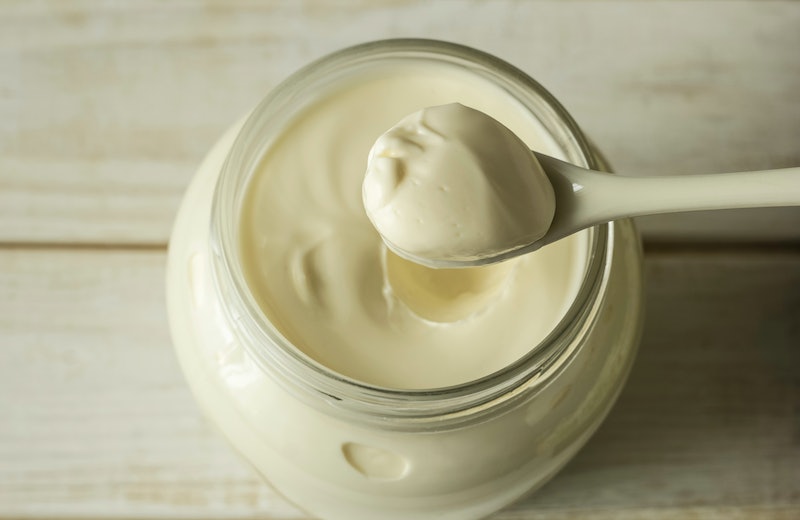 There’s no shortage of divisive foods in the world, but for many people, there seems to be a special kind of derision reserved especially for one particular condiment: Mayo. Some people really hate mayonnaise. And it isn’t just always just simple dislike; among the anti-mayo crowd, there’s a contingent who are vehemently opposed to the stuff. Feelings can run so strongly that it might lead you to wonder exactly why so many people hate mayonnaise so much — but perhaps not unexpectedly, there isn’t just one explanation for the strength of feeling so many share about mayo. It might come down to any number of possibilities, according to several experts with whom Bustle recently spoke — but together, these possibilities paint a compelling larger picture about what fuels our likes and dislikes when it comes to our gastronomic experiences.

Could an extreme aversion to mayo be a result of picky eating habits developed in childhood that stuck around into adulthood? Maybe. Research has shown that people who are picky eaters as adults tend also to have been picky eaters as children; indeed, according to one study published in the International Journal of Behavioral Nutrition and Physical Activity in 2018, the same “picky eater profile” — one marked by high food avoidance and low food approach — has been observe in both kids and grownups. Furthermore, Natalia Stasenko, the registered dietitian and childhood nutrition expert behind Feeding Bytes, tells Bustle that although there aren’t any “concrete numbers” when it comes to how many childhood picky eaters continue to experience issues as adults, roughly 75% of adult picky eaters say that their picky eating habits started when they were kids.

But there isn’t just one factor that accounts for picky eating. “Picky eating is not a single disorder but rather a whole spectrum of issues,” Stasenko tells Bustle. In most people, picky eating habits first rear their heads in the toddler years and start to fall off again between the ages of five and seven, making it a standard part of childhood development. Crystal Karges, MS, RDN, IBCLC, Maternal Health and Child Feeding Expert at Crystal Karges Nutrition, agrees. Says Karges, “Kids are often mislabeled as picky eaters, when in fact, they may just be going through a phase or ‘food jag,’ which is a normal part of growth and development.” According to both Stasenk and Karges, this phase can manifest in behaviors like eating smaller portions, avoiding new foods, and skipping meals. They aren’t usually cause for concern when they’re not fueled by any underlying factors.

But some kids do struggle with picky eating habits that arise from something else — think gastrointestinal issues, anxiety, or sensory difficulties) — and generally, these kids have a little more trouble “outgrowing” the habits as they get older. There’s a lot we still don’t know about these kinds of issues — the research is ongoing — but when they continue into adulthood, according to Stasenko, contributing factors may include “unresolved underlying issues, combined with individual psychosocial makeup.”

What does this all have to do with mayonnaise, specifically? For some people, their experiences with mayo as kids may lead to continued negative associations with it as they grow older, making it something they want absolutely nothing to do with as adults. The pattern holds up at least to anecdotal evidence: As the Huffington Post’s extensive 2018 piece on mayo-hating community noted, many self-proclaimed adult mayo haters report having had some sort of traumatic experience with mayonnaise as children which they credit with their long-standing and powerful dislike of the stuff.

Of course, even adults who aren’t picky eaters can experience an aversion to mayo, so there’s clearly more at play here. Some theories posit that it has something to do with the role disgust has long played in keeping us safe and healthy — and what happens when that impulse goes slightly awry.

Experts widely believe the human emotion of disgust to be a defense mechanism — in our hunter-gatherer days, it helped us avoid contamination, which could make us sick and endanger our survival. “Disgust is a relatively old system, but I think it is uniquely human,” Paul Rozin, professor of psychology at the University of Pennsylvania and one of the world’s foremost experts in disgust, tells Bustle. “In our ancestral environment, it probably functioned to keep us away from decayed food.” This instinct hearkens back to a time when we knew a lot less about our world than we do now — including the fact that some “decayed” foods, like cheese or soy sauce, are perfectly safe to eat.

But our base instincts often aren’t governed by the wealth of knowledge available to us in our modern world — so, even when we know a type of food is safe to eat, our ingrained sense of disgust might kick in anyway as it tries to protect us from something it has long identified as unsafe. For example, says Rozin, “Most people don’t want to eat a piece of chocolate shaped like dog doo, even though they know it is chocolate.”

Mayo, too, might trigger that protective instinct in some people. Indeed, Rozin’s theory on why mayonnaise grosses so many people out is simple and elegant: As he notes, “Soft and slimy things are often decayed, and tend to be disgusting.” Mayo is soft and slimy; ergo, it reminds us of decay; ergo, it is perceived as disgusting.

But that’s still not the whole story. It turns out that picky eating habits and our evolutionary sense of disgust have something in common — and that “something” can act as a sort of trigger that sets off our “yuck!” reaction: Texture. Indeed, as a 2006 study published in the journal Appetite focused on how certain food properties affect whether we reject a food found, sliminess is particularly associated with food rejection — and mayo is nothing if not slimy.

“In fact,” says Rogers, “food texture is often split into three key areas: Initial phase (first bite), masticatory phase (chewing or mouth movement), and residual phase (after swallowing).” Throughout these three phases, we get “cues” for a food texture experience not just from the feel of the food itself, but also from the appearance of it, the sound of it as we chew, the mechanical sensation of chewing itself, and even the temperature of the food in our mouths. Says Rogers, “All these aspects will be different for different people due to, for example, differences in sensitivity, mouth and teeth health, and dryness of mouth.”

The context can change how we perceive certain foods, too. In the case of mayo, explains Rogers:

This specific context might therefore make the texture of a food more or less acceptable to you. As an example, I’m fine with mayo if it’s used in, say, tuna or potato salad, but I shudder at the thought of eating it on its own or spreading it thickly on a sandwich. Initially, I had a hard time explaining why that was — but Rogers’ point about context makes it all become clear: When mayo is mixed in with other foodstuffs, the mouthfeel is A-OK by me. When it’s layered on top of other foodstuffs, it changes the whole experience into something I personally find kind of unpleasant.

As Rogers notes, though, exactly why any single person might love or hate a certain food is often unique to that individual. “It might be something learned from our childhood or related to an episode of food poisoning,” she says. Some people may also simply be “more sensitive to certain aspects of the food,” per Rogers — think super-tasters, who tend to be much more sensitive to some tastes than people typically are. Any of these possibilities — or countless more — might play into why someone, say, loves coffee or hates mayo.

Ultimately, though, it doesn’t really matter why you might hate a certain food, whether it’s mayo or something else entirely. You’re allowed to have likes and dislikes, no matter what your reasoning behind them might be — even though our culture (wrongly, I would argue) tends to peg moral value to how adventurous an eater you are.

“What is missing from the current understanding of how and why eating problems persist in adulthood is empathy towards those who struggle and strategies to help them cope with potentially anxiety-triggering eating scenarios,” Natalia Stasenko of Feeding Bytes tells Bustle. Feeding research and policy tends to be aimed at “fixing” the problem, says Stasenko — but that might not be the best way to go about addressing it. “It is becoming clear now that some adults have a very limited dietary variety and it is not their fault,” she notes. “Instead of feeling shame and guilt around their eating, they need understanding, tools for coping with anxiety and gentle and kind strategies to explore foods in a way and at a speed that works best for them.”