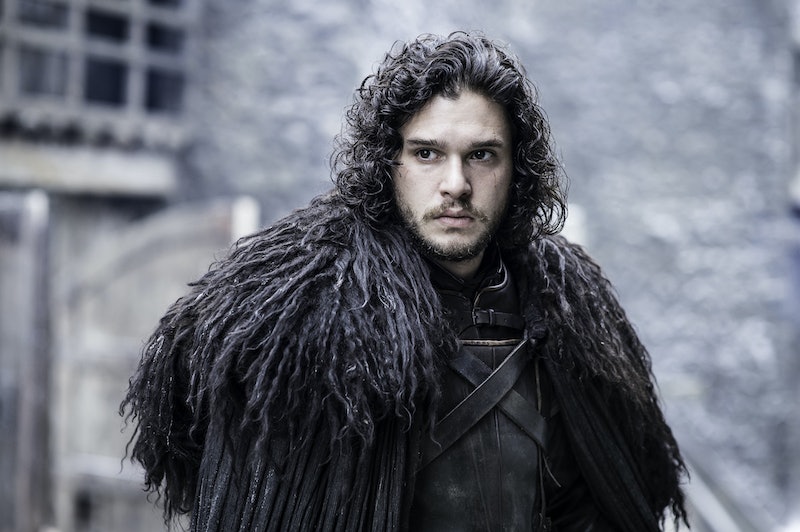 But when you strip away all the scheming and conniving and War of the Roses fan fiction, you're left with the story of one ice themed family and one fire themed family who are both kind of trying to save (or end?) the world. Hence the name of the series.

So what does that have to do with the Stark family pets? Well, like any good fantasy author, Martin has taken real world history, mythology, and literature, amped it all up to 11, and added his own original spin. The direwolves are no exception. To begin with, direwolves were real animals, and they were, in fact, slightly bigger and scarier than our humdrum modern-day wolves. They mostly lived in North American, however, and they went extinct alongside saber-tooth cats and woolly mammoths, so they definitely weren't kicking around medieval Fantasy England.

In Martin's world, though, the Ice Age never really left Fantasy Europe. Winter lasts for years on ends, and mammoths hobnob with giants and snow zombies in the frozen North. So he plucked this species of big nasty wolf right out of the Late Pleistocene, added some medieval England vibes, and wrapped it all up in some re-mixed Norse Mythology to create one of the most memorable pack of wolves in fantasy literature.

Much like Dany and her dragon babies, the Stark kids get matched up with their direwolves under suspiciously convenient circumstances. Even in Westeros, direwolves are rare and possibly extinct, but Ned and his sons stumble across a dead mama wolf at the start of book one. The late wolf has five still living pups, one for each "true-born" Stark kid, and then the gang finds a sixth, albino pup, just for Jon "Special Boy" Snow.

Because the direwolf is the sigil of House Stark, and because Martin loves a good fantasy pet, all the kids get to keep their wolf pups. But, as in any good kid-and-dog story, not all of the wolves are going to make it to the end of the series: Sansa's pup Lady has already been put to death after being falsely accused of attacking Prince Joffrey. Robb and his Grey Wind were both killed at the Red Wedding. Arya set her Nymeria free to save her from the Lannisters. In the books, Summer, Shaggydog, and Ghost have all managed to stick with their Stark kids for now, but who knows how long that will last.

But something strange has started happening to all of the point-of-view Stark babies with surviving wolves: They can become their wolves. Even Arya seems to have this ability from far off Braavos. All the Stark kids seem to be wargs, beings with the innate ability to slip inside the skin of animal allies.

Now here's where the Norse Mythology comes into play: the word "warg" simply means "wolf," but warg usually refers more specifically to the giant, mythic wolf Fenrir and his wolfy sons. Wolves abound in Norse Mythology, and they're not necessarily good or evil by nature. Odin, the head of the gods, is a one-eyed, all-seeing old man who enjoys hanging out in trees, and who can "see" through the eyes of his pet ravens and wolves (a la that creepy old tree man who Bran moves in with). His wolves seem to be mostly benevolent, with a touch of latent threat.

Fenrir, on the other hand, is a more... morally complex figure. He's one of three monstrous children of Loki, the God of Mischief. He's also a wolf who grows so big that the other gods decide to chain him up for safe-keeping. They successfully restrain him, although one god loses a hand in the process (that's what you get for pushing kids out of windows, Jaime), but there is a prophecy that one day Fenrir will break his chains and eat up Odin for revenge. His wolf suns will also eat the sun and the moon for good measure, plunging the Earth into darkness and a Great Winter. This will bring about Ragnarok, the "end of the world."

Funnily enough, the old Norse apocalypse of Ragnarok also involves an army of the undead, not so dissimilar from Martin's legions of snow zombies. Naturally, the army will be led by Loki, Fenrir's daddy. Loki is a shape-shifting, wall-building, frost giant trickster god, who shares a lot of traits with both the White Walkers and the Starks (and kind of Tyrion Lannister, but we're talking about the wolf kids here).

Loki's two other monster kids will also roll up to to help their dad in the big final battle: His daughter, Hel, is a zombie goddess herself, who will refuse to resurrect the super friendly god of the sun and bring back the daylight. His other son, Jörmungandr, is an unimaginably huge serpent/dragon monster, who will rise from the sea to straight up murder everybody.

So... what does this have to do with the Starks? Well, Martin's books are clearly heading towards some sort of battle against the undead, potentially resulting in eternal winter. Heck, the whole series is based off a Robert Frost poem that discusses the end of the world in fire and in ice. It seems like the Westerosi equivalent of Ragnarok is coming. And if the wolves and dragons are going to fulfill their mythological destiny, then the Starks and the Targaryens and their fun magical pets might end up helping the White Walkers in their world-ending quest.

Which... doesn't sound great, admittedly. But we don't entirely know what it is that the White Walkers want yet. And even in Norse Mythology, after the wolves of Ragnarok "ends the world," a few shell-shocked survivors are left to pick up the pieces. Even after the Great Winter, spring eventually comes again. So maybe that'll happen with the world of Ice and Fire, too.

After all, Martin loves a happy ending, right?