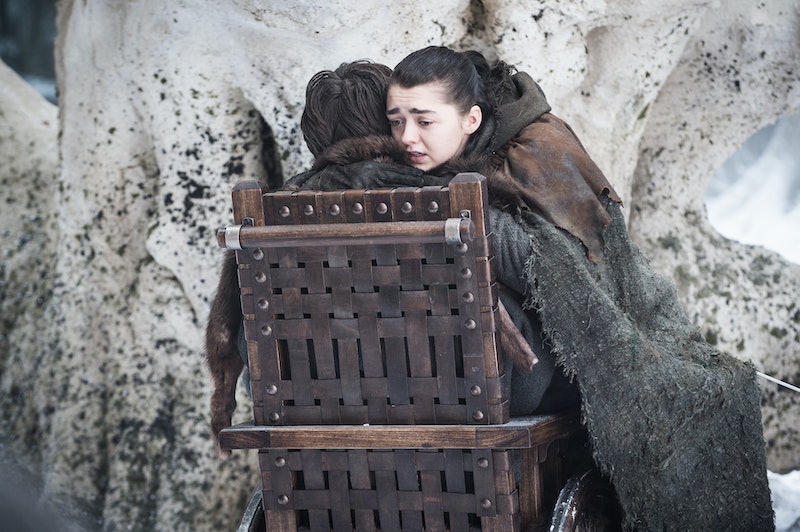 It's a dark time to be a member of the Stark family of Westeros. It kind of always was. In fact, ranking the Stark kids most likely to die in Game of Thrones Season 8 is almost an exercise in futility. Two have already been killed unceremoniously — by a vicious father and son pair, no less — and two have evolved into Not Starks in front of viewers' very eyes. That's not to say that what remains of the Stark clan aren't at risk heading into the show's final season; it's that they're each at their own level of risk. And only one of them appears to be entirely human.

Yes, depending on how you look at it, there are only so many actual Stark kids left on Game of Thrones. Dwindling numbers are not in their favor, nor is the show's penchant for killing off the faves. Still, some stand a better chance than others — and maybe being not quite Starks after all will help them there.

Whether fans think certain Starks will sit on the Iron Throne once and for all, or be surprise killed in the Game of Thrones 8 season premiere whenever it comes, one thing is for sure: A ranking is necessary.

Here are, in order, the Stark heirs in order of most likely to die by the end of Game of Thrones:

For the record, Robb Stark is deceased (sob), Rickon Stark is deceased (it's a miracle he lasted as long as he did anyway, honestly), and Jon Snow is technically a Stark, but on his mother's side. Westeros is patriarchal, which makes him a Targaryen. Even if he was raised with Starks and it was understood he was Ned Stark's son. In actuality, he was Ned Stark's sister Lyanna's son, which made him Ned's nephew. Ned had to keep that secret to protect the whole realm. (Interesting how that turned out.)

Can Arya die? No, seriously, can she? She's survived what would appear to be mortal wounds on more than one occasion, and in increasingly tenuous ways. She picked up the skills of the Faceless Men without officially finishing her training or committing to the lifestyle, and has a trail of bodies behind her that began back in Season 1. As a fan favorite, a fearsome opponent, and incredibly powerful person, it seems highly unlikely that she'd die. Die for good, that is. Game of Thrones loves a morbid ending, that's for certain, but it would be such an odd, irritating call to dispose of Arya. Literally no one and nothing is worthy of taking her life! Fan fiction is probably being prewritten just in case.

2. Medium Amount Likely, Because Who Knows What This Guy's Deal Is: The Three-Eyed Raven, Formerly Known As Bran

OK, so Bran is not 100% a person anymore, if he's to be believed, which makes his place on this list a little iffy. But the last Three-Eyed Raven took eons to absorb his knowledge and complete his learning and, like, grow into that tree cave inside of a mountain. Bran, who would technically be Lord of Winterfell and Warden of The North by now (again, patriarchy), abdicated his position. He doesn't identify as Brandon Stark anymore, and perhaps, he can't. The question "Can Bran die?" is better phrased as "Has he died already?" which would echo Meera Reed's mournful declaration of "You died in that cave." As of now, though, he's still around, and all signs point to his playing a pivotal role in the final season. So...

1. Most Likely To Die: Sansa Stark, Lady Of Winterfell

This is part math and part logic. Does Sansa have powers, like Arya? No. Is she some kind of mystical entity, like Bran? No. Does this put her at a disadvantage? Absolutely it does. Sansa's whole thing is that she's a slow learner: When she learns, she learns; it just takes her a while to get there. That doesn't bode well for someone in her position. She's mostly in power up North, but without the total respect from her people — many of whom would rather follow Jon Snow, though they aren't currently aware he's pledged loyalty to Daenerys. It's a little messy. Sansa hasn't exactly thrived in messy situations, and she's been out-manipulated a few too many times. It's difficult not to root for her, but realistically, it seems a lost cause.

To recap: Two Starks have passed, one is presiding over their ancestral seat, and three more aren't really as Stark-y as one might think. For these reasons and more, Sansa's at the bottom of the proverbial barrel.

So good luck in Season 8, Stark family and people formerly identifiable as members of the Stark family! May the odds be ever in your favor, even though they're probably not.