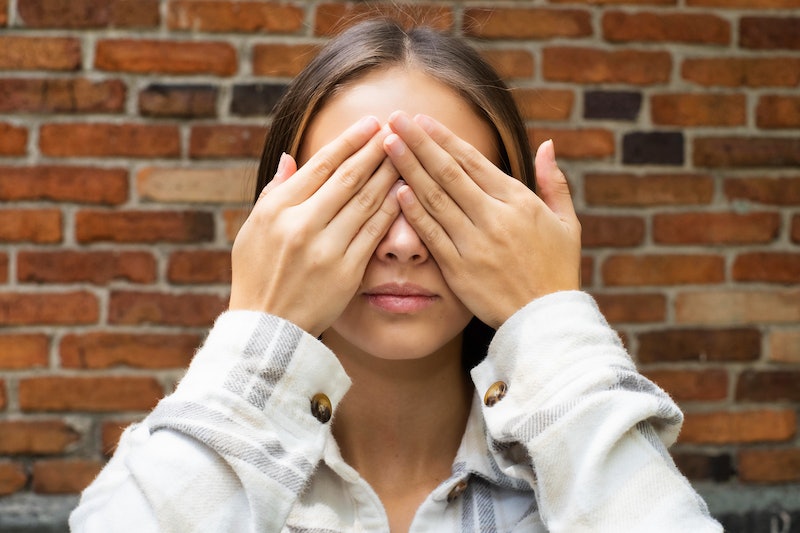 Are you the type to get embarrassed at everything, from a simple slip of the tongue while ordering coffee to accidentally tripping over somebody's foot? It turns out that there are actually a lot of reasons why you get embarrassed when you do something socially problematic. And that might be comforting to you the next time you feel the blushes creeping up your neck after splashing coffee on a date.

Actually defining embarrassment can be a bit tricky. "Embarrassment," notes a 2005 study on the subject, "is a social, moral, and self-conscious emotion, and has been characterized as a complex interaction between the eliciting situation, one's personality, and the real or imagined presence of another." What embarrasses us, in other words, is a highly complex matter: it depends on our own perceptions of what counts as a faux pas. But it's always about others, even if they're not there to see us fall down stairs or sing poorly in the bathroom mirror, and that's the essence of the feeling. If you blush or stammer after a cringeworthy moment, experts believe, it's because you're socially motivated to do so to other people to try and fix the problem.

The other important thing to know is that embarrassment is actually highly valuable, and that feeling and showing it can be socially important. If you feel it far too often or find your experience of it disabling, that's not because embarrassment is inherently bad; that's likely because you have social anxiety, a deep fear of the perceptions of others and how they can harm you. Embarrassment on its own isn't a massive problem, so don't fear it: understand it.

More like this
5 Signs You Have A Toxic Relationship With Yourself
By Lexi Inks
Here’s What TikTok's "Mascara” Trend Is *Really* About
By El Hunt
These 3 Signs Are The Master Chefs Of The Zodiac
By Kristine Fellizar
These 4 Zodiac Signs Make The Best Bridesmaids
By Nina Kahn
Get Even More From Bustle — Sign Up For The Newsletter
From hair trends to relationship advice, our daily newsletter has everything you need to sound like a person who’s on TikTok, even if you aren’t.