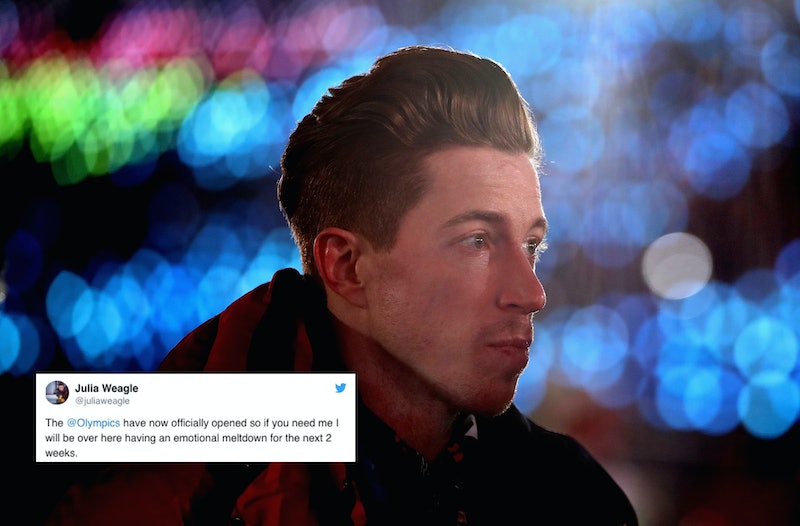 They happen every four years (really, every two-ish, if you’re a fan of both Winter and Summer Olympics). The location may change, but we still see the same sports, the same talent, the same level of dogged determination each and every time we the athletes parade under their respective flags every even-numbered year. But each year the Olympics are on, and we watch the best athletes in the world arrive at the opening ceremony, even the most cynical of us feel our emotions well up inside us, a sudden allergy come on, in response to, well, the whole thing. This year, I started feeling my feelings as soon as the opening ceremony started. But I know plenty of people who watch a particularly heart-wrenching triple axle with wet eyes, or whose faces flush when the torch is finally lit. But why do we get emotional watching the Olympics, year after year?

“As a bystander watching from the sidelines, individuals experience a high level of empathy for what devotion, work, and commitment brought the Olympians to the games,” Maria Ulmer MA, LMFT, CAADC, Chief Operating Officer at Summit Behavioral Health, tells Bustle. You know the phrase, “Olympians: they’re just like us?” There’s some truth behind that, at least as far as our brains are telling us — we see these people walking underneath their flags, and, even though we may have incredibly disparate skill sets and talents, we see ourselves in them. As a Olympic-watching friend of mine put it, “They are for all intents and purposes normal people.” We feel the cold they feel wearing Bermuda shorts in South Korea in February. And we feel (or we can extrapolate) the pride they must feel in getting to represent their country in front of millions of viewers.

Of course, patriotism does play a major role in why we feel connected to these athletes, even if you’re not feeling particularly optimistic about the state of the nation, or the even world — which, similarly, is influenced by our unfailing sense of empathy. “Patriotism brings about feelings of love, belonging, support, loyalty for one’s country,” says Ulmer. Patriotism, especially in 2018, is a complicated sentiment — but that, perhaps, is why it stirs up all the more emotion.

"It is an universal need for all human beings to want peace in a difficult and chaotic world,” Lori Russell-Chapin, Ph.D., a professor of counseling at Bradley University, tells Bustle. When the North and South Korean Olympic teams march together under one flag during the opening ceremony, the international community — looking on nervously as tensions between North Korea and the U.S. have escalated over the past year — breathes a small sigh of relief, if but momentarily. “The Olympics represent that moment when we put aside all our biases and appreciate achievement, sacrifice, drive and compassion for others,” Russell-Chapin continues. “We see ourselves, for just a moment, making a difference in this world.”

But as far as why these different strands of empathy provoke an emotional reaction in some of us? Surprisingly, there isn’t a lot of science out there. Michale Trimble, one of the world’s foremost “crying experts,” told TIME in 2016 that “The same neuronal areas of the brain are activated by seeing someone emotionally aroused as being emotionally aroused oneself,” which is to say that, from a brain standpoint, we’re predisposed towards empathy, especially when we see someone who’s emotional themselves (as we can imagine many of the Olympians are). Which is to say, we’re emotional because they’re emotional: “There is no holding back for them emotionally when they succeed or fail,” because they’ve worked so hard to get where they are, my same friend says. As we’ve all worked to get where we are — it’s just that our accomplishments (our hopes, and our failures) don’t play out on the international stage, in a stadium far from home.