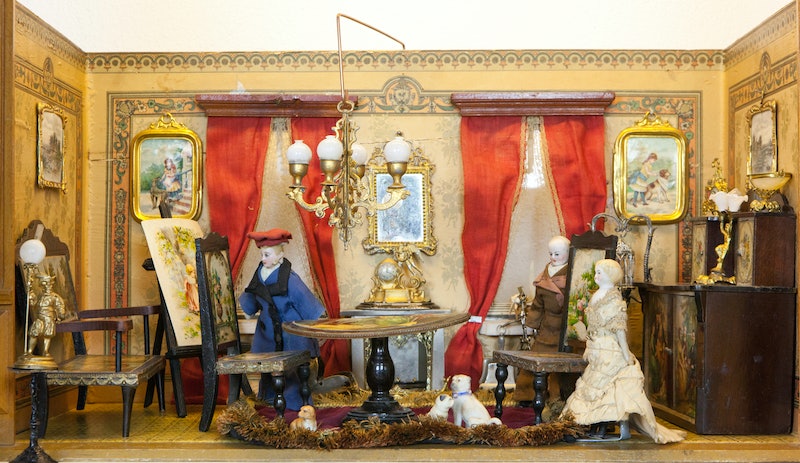 As a kid, and a tween, I was a huge dollhouse fan, with an obsession for tiny things. I had, at one point, three, all fully (if chaotically) decorated with mixes of expensive mock-oak furniture from the pricey toy store in my city's fanciest shopping arcade, knock-offs from catalogues, and things I'd rigged myself. My dad and I created an entire house's frontage out of cardboard; I decorated the walls with wallpaper samples and stuck carpet offcuts on the floors. There is no easier way to guarantee that a girl will keep out of trouble, and lack dates for years, than encouraging her to make dollhouse paintings out of magazine pictures and gold foil "frames" on her weekends. I didn't care.

Even though I'm now an adult — and married to a man who collected miniature art in his own teens — I still get a twitch of acquisitiveness every time I pass a shop window featuring a wardrobe that could fit into the palm of my hand, or a pot plant with leaves almost too small to see. And I'm not alone; while many parts of the U.S. toy industry are shrinking, dolls and their accoutrements are only becoming more popular, according to the American Toy Association. Which begs the question: Why are we so obsessed with the idea of tiny things that can be easily lost, broken or swallowed by a confused pet?

The psychology of society's love for dollhouses and miniatures is intriguing, and dates back centuries. Dollhouses weren't originally conceived as toys; when they arrived on the scene in the 17th century across Germany and Holland, they weren't even for children. I've seen many of these lavish baby-houses, as they were called, in museums; they were objects for wealthy adult women to fill with prized, expensive creations, and weren't necessarily meant to be touched. The first "playing" dollhouses were kitchens, with pans the size of your thumb and copper kettles, designed as instructive aids to show small girls how to keep house. It was only when girls presumably rebelled and started having fun that the idea of the miniature abode really took hold as an object of play.

So where does the appeal come in? We start to attribute voices and ideas to miniature people and objects when we're about four to six, according to psychological studies. (Before that, we're more likely to throw them or stick them up our noses.) From that point, miniatures can grip many of us with fervor, and in some cases develop into adult obsessions. From miniature artists who create fantastic new worlds in tiny scales to grandmothers scouring the tables at the local miniatures fair, it's a business that attracts many different types and approaches. And there's considerable behavioral nuance behind our love for the very small.

Miniature things invite respect for their craftsmanship and the daintiness of their construction, but that's only a small aspect of their appeal. Part of the fantasy of miniature houses and their accessories — diminutive cribs, teapots the size of a fingernail, filigree Faberge eggs you could fit on the head of a pin — is is that they offer an alternative life. Rather like the The Sims, which offers users the chance to build and decorate their virtual dream homes in unimaginable opulence (and with which I, as a small girl, was also obsessed), dollhouses, experts believe, give people places to build the lives they will never be able to experience in full-size. A Rembrandt in the living room is perfectly achievable when it's the size of a postage stamp.

People are willing to spend what looks like monumental amounts of money for hand-carved or highly ornate pieces of miniature furniture, ones they'll never be able to afford at human scale. Margo Kaufman, writing in the LA Times about dollhouse lovers in 1995, wrote wonderingly, "Hobbyists confined by unreal Los Angeles real estate prices to one-bedroom apartments can own a street of Georgian, Victorian, French Regency and antebellum properties. Prim homemakers oversee bordellos. One mini maven, perhaps a tad over-influenced by The Diary of Anne Frank, has built a secret annex to her dollhouse to hide a Jewish family, complete with a miniature rabbi and a Passover Seder table." People's real estate ideals take all shapes and sizes: the fabulous 1920s Stettheimer dollhouse, created by a wealthy socialite in New York, is a modernist dream featuring custom-made artwork by Marcel Duchamp, and there's a rise in popularity for houses that look like modern abodes complete with trash cans.

Even the fabulously wealthy can use dollhouses as dreamlands. Colleen Moore, a silent film star of the 1930s, constructed a literal castle that counts among the most ornate dollhouses ever made. It's only really challenged by Queen Mary's Dollhouse, a five-storey marvel which is on display on Windsor Castle and is filled with mind-blowing miniatures like custom-written books by Rudyard Kipling and Sir Arthur Conan Doyle, all gifted to the Queen in 1924. Those who have everything can still, in the world of the dollhouse, get the unimaginable on a microscopic scale. The dream can also leap time and space. Dollhouse miniature manufacturers find perennial interest in old-fashioned and obsolete items (butter churns, sewing machines, inch-high copies of Mrs Beeton's Household Management). If you can't visit the past, you can create it in your living room.

Dollhouses and the miniature also offer safe environments for darker explorations. Forensic investigation at the beginning of the 20th century was greatly influenced by the work of a woman named Frances Glessner Lee, an expert in forensic science who taught crime scene detection skills through meticulously recreating crime scenes as doll-scale dioramas. The New York Times, reporting on the craze for "miniacs" in 2016, reported collectors who specialize in tiny pistols that actually fire, miniature skulls and working electric chairs.

The reason for this interest may be tied to the fact that, in psychological terms, dollhouses and miniature play are safe spaces that encourage total control. "For children," the antiques expert Eve Kahn wrote for the New York Times in 1994, "doll houses can make the universe seem obedient." If your own environment is chaotic, poverty-stricken, miserable, beset with domestic woes or traumatic, dollhouses offer the direct opposite: a universe entirely at your command. The famous psychologist Dr. Ruth had a therapy dollhouse with which she helped children to work through serious issues. It also, she told NPR in 2016, represented a control that she, as a child refugee fleeing the Nazis, had lacked. “I had no control over my life. I did not want to leave Germany; I did not want to go to Switzerland. With the dollhouses, I have control. I put the parents, and they stay there. I put the children, and they’re going to stay there."

I'm old enough now to decorate my own rented house with full-size bits and pieces, but I admit to an occasional bit of disappointment that things somehow always get dusty, spilt, or covered in letters from the council — in other words, far from the dollhouses of my childhood, where everything was perfectly arranged and the butler was always in the hallway holding a tray of cakes. In a world where most millennials can't even think of getting on the real property ladder, it's no real wonder that dollhouses remain, for many of us, a gentle bit of wish fulfilment.

More like this
This Psychological Effect Might Be Keeping You From Hitting Your Goals
By Lexi Inks
Craving The Beach? Here's Your Guide To A Solo Vacation In Turks & Caicos
By Alexis Morillo
How To Incorporate Goblincore Into Your Home Decor This Fall
By Alexis Morillo
The 5 Best Sheets For Your Purple Mattress, According To Reviewers & The Brand
By Vanessa Spilios
Get Even More From Bustle — Sign Up For The Newsletter