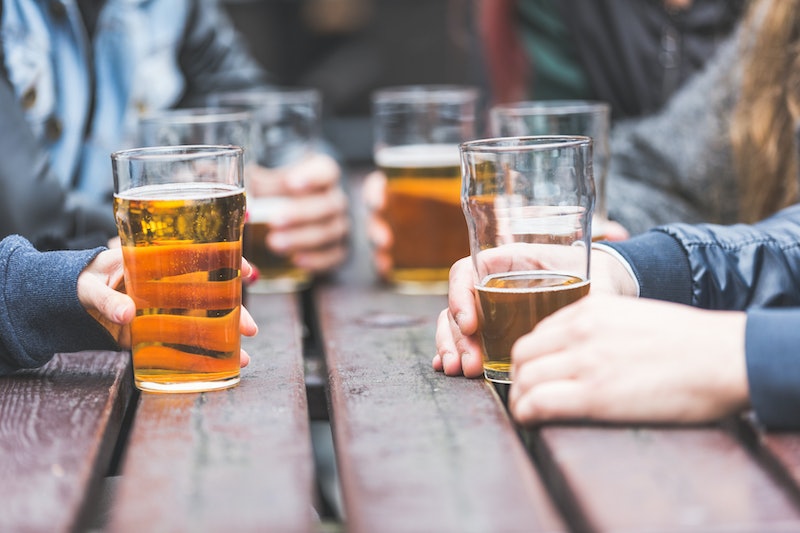 Part of #adulting is figuring out what you like and dislike, and for some of us, beer is firmly in that latter category. But when everyone and their mother seems to love nothing more than a cold lager on a hot day, you might wonder why beer tastes so bad to you. Turns out, a surprising scientific explanation reveals that your genes could be to blame, which means you can officially stop trying to like beer. It's true that — for some people — beer is an acquired taste, and I've met very few people who took their first sip of beer and said, "Wow, this stuff tastes great."

But, let's get back to the science. What happens is that some people are actually genetically programmed to dislike the taste of beer, Live Science reported. A study published in the journal Alcoholism: Clinical and Experimental Research found that genetics, specifically a variation of a particular gene, actually play a role in whether or not you find the taste of beer bitter. What's more, another study published in the journal Chemosensory Perception found that an aversion to bitter tasting food and drink was, evolutionarily, a defense mechanism against poisoning.

On the flip side, a third study published in the journal Neuropsychopharmacology found that for beer lovers, the beverage releases the feel-good chemical striatal dopamine in the brain, especially for subjects who have a history of alcoholism in their families. All three studies make a case for genetic factors playing a role in determining not only whether or not you'll like the taste of beer, but also the likelihood of whether or not you'll have an alcohol dependence.

So, why do some people find beer bitter while other people don't? Dr. Virginia Utermohlen Lovelace, an associate professor emeritus of nutritional sciences at Cornell University, told Live Science that the human body has 25 different types of taste receptors responsible for tasting bitterness, and they can react differently in different people.

"The cell to which that receptor is attached sends a message to the brain to say, 'Oooh this is bitter!'" What's more, if you're drinking a hops-heavy lager, and you don't like that bitter taste, you taste receptors are going to suggest you put down that mug.

This is one reason that bitter drinks are often served with salty foods, case in point — tequila and salt being lifelong BFFs. "Sweet and salty foods can help turn off the effects of the bitter receptors, which is why we have beer nuts and why we drink tequila with salt," Lovelace told Live Science. "When you cut away the bitter, you're more likely to receive the specifics of the flavors underneath."

Furthermore, John Hayes, assistant professor of food science at Penn State, explained on the university's website that a 2011 study found that just like some people see colors differently than others, some people don't taste bitterness.

"This study moves us beyond the one-size-fits-all approach," he explained. "It turns out that different bitter foods act through different receptors, and people can be high or low responders for one but not another. Thus, you may despise grapefruit but have no problem with black coffee."

And, though it might be true that an aversion to bitterness may serve as a defense again ingesting toxic substances, the website Life by Daily Burn reported that dietitians actually recommend eating more bitter foods because they're not only good for you, but they also increase the absorption of foods and therefore nutrients. Think of the apple cider vinegar trend (does anyone actually like the taste of this stuff?).

However, Fresh Thyme Farmers Market Dieticians Kerry Clifford and Meghan Sedivy told Life by Daily Burn that "Eating too many of these foods could cause unfriendly side effects like bloating, gas, and diarrhea."

If you just can't stomach bitter beer, there are plenty of other beers that aren't bitter, or you could just opt for something more pleasing like wine or sangria, perhaps in an Instagram-worthy juice box. Just remember to drink responsibly.

More like this
Got Brain Fog? Here Are The Best Supplements For Memory & Cognition
By Carolyn Steber
TikTok's Butter Board Might Be The New Cheese Plate
By Emma Carey
Deliveroo Is Selling Lotus Biscoff Cinnabons Now
By Darshita Goyal
10 Pumpkin Recipes That Are Way More Creative Than Pie & Lattes
By Rebecca Deczynski and Alexis Morillo
Get Even More From Bustle — Sign Up For The Newsletter