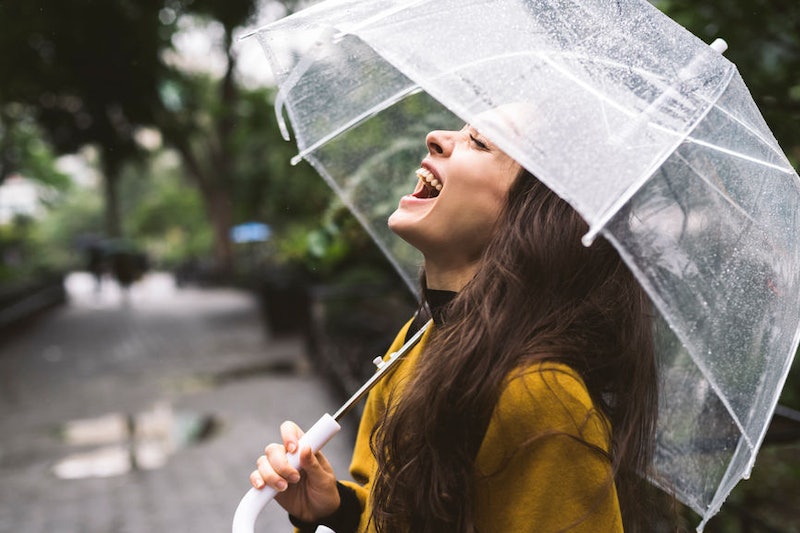 Unusually hot weather in Britain typically results in a three-phase reaction. Firstly, jubilation: no one is wearing tops (or sufficient SPF), every outdoor pub table is occupied, and Instagram is inundated with sunny day snaps. Next comes exhaustion, as grey weather acclimated Brits begin to flag under the relentless heat. And finally: concession, as we admit, sweaty and sun poisoned and dehydrated, that we really quite miss the rain. Little wonder then, that recent rainstorms across the UK have been met with exhilaration. But why does rain make you happy? Is there more to it than the cooling hiss of a raindrop landing on severely under-sunlotioned skin?

As it turns out, it might be more than the relentless heat encouraging Brits to celebrate the rain. Firstly, rain might actually impact positively on people with anxiety and depression. While it's far from a cure — anxiety and depression are complex, often chronic mental illnesses, and presenting reductive, over-simplified 'solutions' can be extremely insulting to those who live with them — it could help to relieve temporary symptoms, according to Vice's Tonic vertical.

Vice quotes therapist and anxiety and depression specialist Kimberly Hershenson, who explains, "Rain produces a sound akin to white noise. The brain gets a tonic signal from white noise that decreases this need for sensory input, thus calming us down. Similarly, bright sun tends to keep us stimulated."

The site describes rain as an example of "pink noise," or a sound "which has enough variables in frequency to engage the subconscious but not enough to distract or disturb." According to Vice, such pink noise can impact positively on sleep and memory — and the Independent reports that lack of sleep is not only a symptom of anxiety and depression, but a potential trigger of the illnesses too. Those with insufficient sleep are "less able to tackle negative thoughts and disengage with negative emotions than those who get a sufficient amount of sleep", the newspaper suggests, based on a study published in the Journal of Behaviour Therapy and Experimental Psychiatry. Again, it's vital not to reduce the symptoms of anxiety and depression to a simple reaction to the weather — but it is possible that a rainstorm could provide a small amount of temporary relief.

According to the Guardian, rain might not have the negative impact on people's mood that we might assume. A study by Professor Franz Buscha, presented in 2015, "dispels the commonly believed notion that rain, or a period of bad weather, makes people moodier, unhappier, in poorer health or less friendly", the newspaper reported. After combining weather information from the Met Office and individual wellbeing data from the British Household Panel Survey, Buscha "found no evidence that the often assumed relationship between sunshine and happiness existed".

That's not to dismiss the very real issue of seasonal affective disorder, and other seasonal mental illnesses, of course — the Guardian reports, "The paper makes a clear distinction between daily weather and seasons. Buscha found there is significant evidence of seasonal affective disorder (SAD) whereby individuals become markedly less happy during the winter because of a lack of light." Daily weather variations, however, seemed to have less of an impact — so perhaps it's not so unusual for the current spates of rain across the UK to be met with so much delight.

So there you have it: there could be more to your rain-induced delight than just sheer heatwave exhaustion. The inclement weather could, in fact, be boosting your mood, improving your sleep, or providing a little relief from your anxiety. Either way, of course, let's acknowledge the inevitable: it won't be long until Britain's complaining about the weather again.