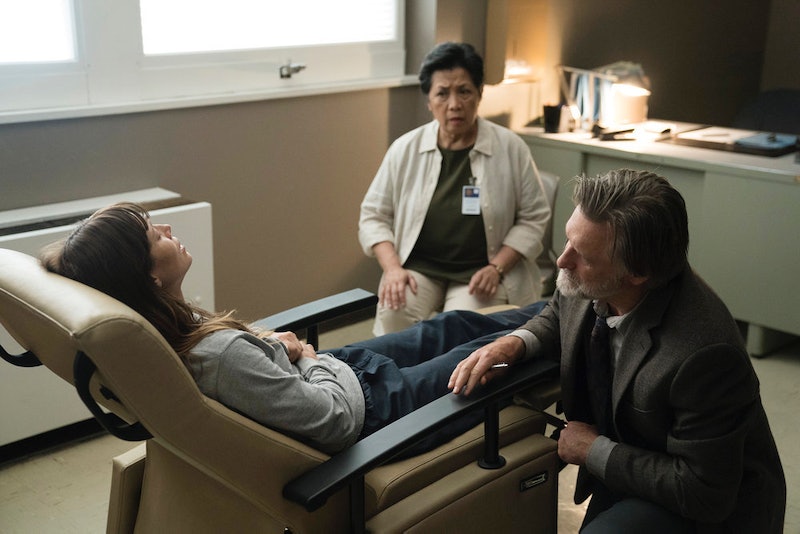 Just when fans think they have USA's The Sinner figured out, the show throws another twist their way. Or, in the case of the Aug. 16 episode, several twists. However, one theory remains constant and is stronger than ever: a sensory experience prompted Cora (Jessica Biel) to kill Frankie. It seems that his killer knew Frankie before the attack, and her reaction to the song by Frankie's med school band proves it. So why does the song trigger Cora on The Sinner?

From the very first episode, when the incident that launched the series occurred, the audience was clued in to the fact that the music meant something to Cora. When she first noticed the couple playing loud music, something eerie drew her into their orbit. When the next song came on, Cora leapt into action and stabbed Frankie to death, shocking the entire beach. During her confession, Cora said, "They were playing that music and they kept turning it up."

Detective Harry Ambrose (Bill Pullman) tested this theory in Episode 2, playing the song for Cora again. She then attacked him, punching him in the same pattern that she stabbed Frankie. This tells Ambrose that there's more to Cora's convenient confession about a man called JD, a bar, and a miscarriage.

So, going into the Aug. 16 chapter, fans knew that music triggered Cora to stab in a pattern and prompted her to tell Frankie's girlfriend that he can't hurt her anymore. Frankie's girlfriend told Ambrose that Frankie had a past with a woman about five years ago, though she didn't know the details. His friend told the cops that it looked like Frankie recognized Cora and didn't fight back. Flashbacks to what the audience assumes is Cora's past also include an unidentified woman in a dress, the date July 4, 2012, and some distinctive wallpaper. The song isn't the only symbol in this story.

Cora is deemed mentally stable in her mental health evaluation, but an expert says that her hallucinations, knee-jerk reaction, and the prescribed stabbing pattern could be symptoms of PTSD. Cora, when triggered, is transported in her mind to a prior trauma. Ambrose also discovers scars on Cora's arms that could indicate prolonged heroin use. Apparently, Cora "ran away" when her sister Phoebe was on her deathbed during Fourth of July weekend in 2012. When Cora returned home two months later, her mother did not take her back in because of her sins as a drug addict. Her Aunt Margaret then took Cora in after a mysterious stint at detox center.

The easy answer would be that Cora ran away and became a junkie. But Ambrose can't accept that, because of the holes in her story, and again goes after the more complicated answer: the truth. When Ambrose presents drug paraphernalia to Cora, she doesn't know what to do with it. She was quick to assume guilt for what happened to her and for what happened on the beach, but the evidence doesn't support that. Someone administered drugs to Cora and someone stitched her up before sending her to detox.

In the episode's cliffhanger of a conclusion, Cora is in the room with the wallpaper. A man sits at the foot of her bed wearing scrubs and a brown mask, asking her cooly, as a doctor would, "How are you feeling today?" Anybody else willing to hedge bets that this evil doctor is Frankie?

Since we don't yet know who's under the mask, the theory that Frankie and Cora knew each other and the music triggered a very traumatic memory is stronger than ever. If Frankie is the doctor in the hotel, his music could have played during Cora's kidnapping. And if his face was covered by a mask the whole time, that could be why his music and his voice may have spurred Cora into action on the beach.