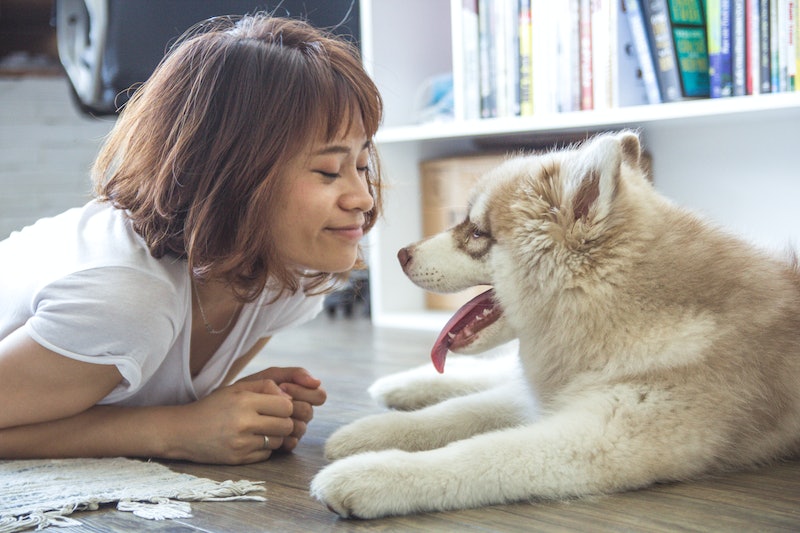 Stressed after a hard day at work? According to a recent study, human's anxiety levels may affect our pets more than originally thought — so go ahead and take a few calming breaths before walking your pupper. In certain cases, dogs do develop similar personalities to their owners and can adopt our emotional states, both good and bad. Research has confirmed a trend of notable physical resemblances between pup and owner (long-haired humans tend to like droopy-eared dogs, overweight owners often choose hefty pooches), and now, it seems our dogs mirroring of us is more than just fur-deep. Considering that domesticated dogs have lived among humans for approximately 30,000 years, though, it should really come as no surprise that these sympathetic animals have taken on some of our personality tics and traits.

To test the emotional transference between pups and humans, researchers at the University of Vienna gathered 132 owners and their dogs. In order to test their stress levels, the researchers placed the dogs and owners in separate rooms, where they exposed the participants to challenging physical tasks (like balancing on a wobbly surface) and mildly threatening situations. Heart rate readings were taken and samples of saliva were tested for the stress hormone cortisol. The humans were also given a written questionnaire measuring where they fell in terms of the "Big Five" personality traits of neuroticism, extraversion, agreeableness, conscientiousness, and openness to experience. They were asked to fill out a survey for their pet as well with more dog-specific questions.

The study, which was published in the journal PLOS One, found that a pet owner's disposition was more likely to change their dog's personality than the other way around. Cortisol levels of dogs with neurotic owners revealed that they had a difficult time coping with stressful situations, suggesting that stressed owners could result in an aggressive, anxious pet. However, laid back owners tended to have friendly, relaxed dogs. Deemed "emotional contagion," the research suggests that a human's influence is so powerful that it could transform a chill dog into an anxious pup by example.

So why do dogs take on our traits? It may all have to do with how our observant canines see us approach the world. "Owners behave differently because they are pessimistic or neurotic, and perhaps dogs read the emotions of their owners and think the world is more dangerous, so are more reactive to it," the study's lead author Iris Schoberl told the Daily Mail. "It looks like people who are pessimistic have dogs which are worse at coping with stress than others."

There is no question that humans and dogs have a deep bond; after all, we spend most of our time together. But as the larger of the two, we want to make sure that we are putting our best foot forward when we are with these loving animals.