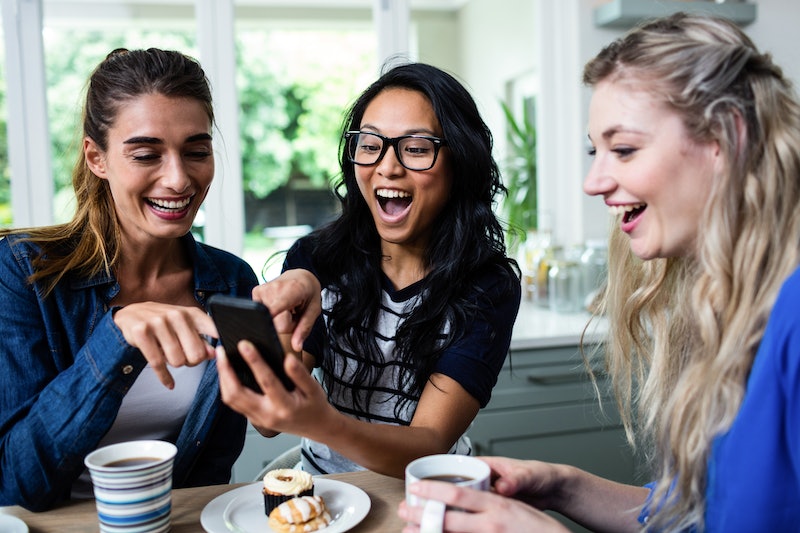 My Sun sign is in Taurus. That means I'm supposed to be practical, determined, sensual, materialistic, loyal, and above all, really, really stubborn. I'm someone who resonates with my Sun sign a lot. If you knew me, you wouldn't be surprised to find out that I'm a Taurus. Some people really do act like their zodiac signs while others don't. If you've ever wondered why, experts say there are psychology-based reasons for it.

Before I understood what astrology was really about, I always just thought it was a fun way to see if the guy I liked was finally going to ask me out that month. But astrology is much more than just your weekly or monthly horoscope. It can also reveal a lot about your personality, your attitude towards life, and why you act the way you do.

"Humans are so wonderfully complicated, and no one theory of human behavior or development can explain every aspect of our actions," astrologer Elisa Robyn, PhD, tells Bustle. "From an astrological point of view, our charts are a mix of 10 planets in 12 signs and 12 houses. So we may not act like our Sun signs due to the placement of our rising signs, our moon, and the other planets. Our Sun sign is just one element of a complex chart."

So if you're just going by astrology, someone with a Scorpio sun may not act intense and broody due to other aspects of their chart.

While scientific studies tend to focus on debunking astrology and zodiac personality traits, there is a psychological theory that explains why some people tend to act more like their sign than others.

The Barnum Effect is a very common psychological occurrence. According to licensed clinical psychologist, Dr. Christine Manley, PhD, this happens when people give high accuracy endorsements (e.g. "Wow, that really describes me!") to descriptions of personality traits that they think are tailored specifically to them (e.g. Libra, Gemini, etc.). In reality, the descriptions tend to be somewhat vague and can apply to many people.

"The Barnum Effect can explain individuals’ belief in astrology, non-scientific personality tests, fortune telling, clairvoyance, palm reading and many 'paranormal' experiences," Manley says. "Because the descriptions are so vague, people tend to superimpose their own personal meaning and experiences on the descriptions, making them powerfully meaningful to that person." If you're into astrology, you're going to find ways to fit those vague descriptions into your own life.

A 1994 study published in the the journal Personality and Individual Differences wanted to see if people really did act like their zodiac signs. Researchers theorized that introverts were more likely to be Earth and Water signs, while Fire and Air signs were more likely to be extroverted. That ended up being the case, but only for people who knew the study had something to do with astrology. Researchers believe that a knowledge of astrology influenced their self-concept. So someone was more likely to say they were extroverted due to the fact that they were a Fire sign.

Just to be clear, The Barnum Effect is not "bad" or negative. According to Manley, it just is. "It doesn’t describe a weakness, per say. Rather, it describes an interesting part of human nature," she says. "However, many con artists have exploited this part of human nature."

For example, a con artist may attempt to convince someone who's vulnerable to The Barnum Effect that they have paranormal abilities. They can easily get reeled in and scammed by people offering certain services like curse removals. "This is especially true when the descriptions come from high status 'professionals' or high status others," Manley says.

How susceptible you are to The Barnum Effect really has to do with how you think and process information. If you're someone who doesn't believe in coincidences and likes to find hidden meanings in patterns, that's the Barnum Effect working on you. If you're someone who needs all the facts in front of them to believe in something, it's less likely to happen to you. Again, it's not a bad thing. Believing in astrology doesn't make someone naive or irrational. It doesn't mean that you're out of touch with reality either. It's just how your mind works.

So a couple of different things go into whether someone acts like their Sun sign or not. For those who don't believe in astrology, it may just be coincidence. For those that do, astrology can be a really enlightening thing. If your zodiac sign helps you shape your identity, there's nothing wrong with that.