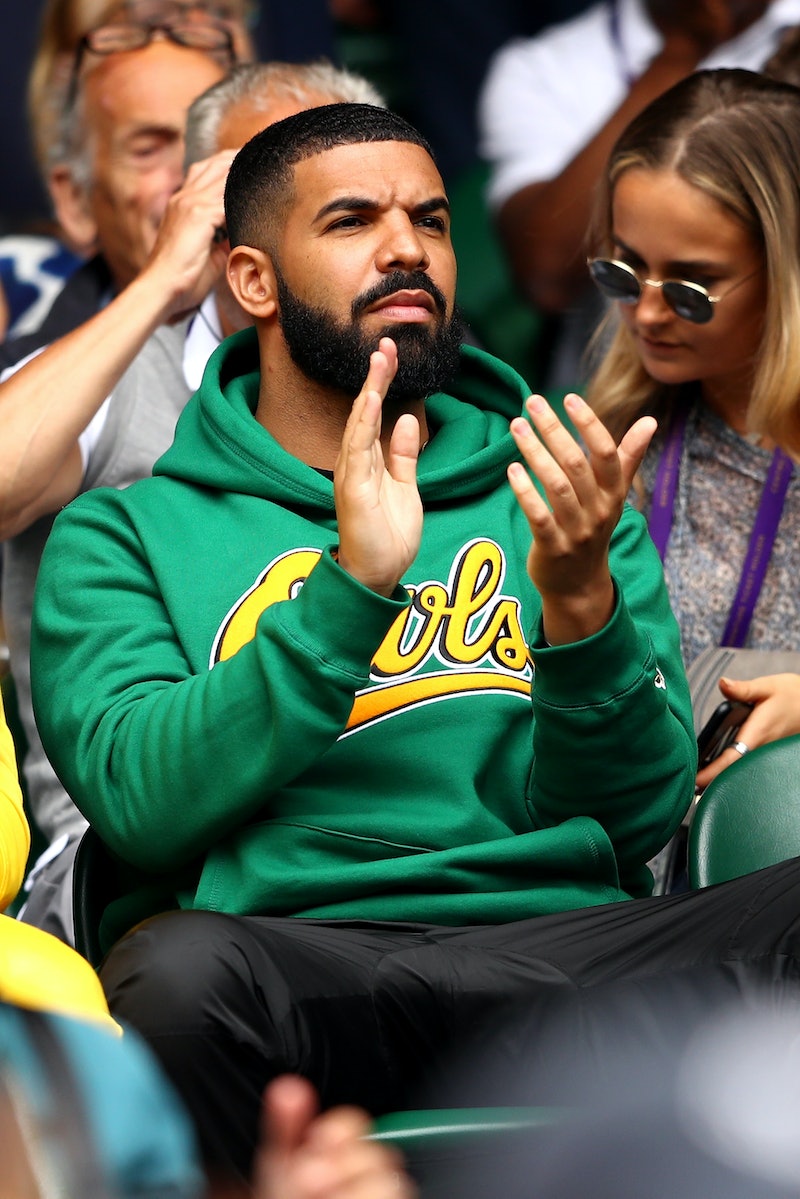 With 2018 quickly coming to a close, many outlets are releasing their end-of-year superlatives, listing the top performing entertainers and works of art that have been released throughout the last 12 months. While the music industry has seen the rise of many pop culture fixtures over the past 12 months, Drake becoming Billboard's Top Artist of 2018 proves that the genre of hip-hop has become a more increasingly mainstream presence in the music world than ever before.

Billboard's rankings are based on artists' chart performance, among other factors, according to the outlet's website. And in his coronation, Drake becomes the first rapper to be named Billboard's top artist of the year since 2005 and just the third rap artist to lead the category in the ranking's history (50 Cent, in 2005 and 2003, and Nelly, in 2002, have been bestowed with the honor in the past). Drake is also joined in 2018's Top 5 list by Cardi B and Post Malone, further lending to the notion of hip-hop's current prevalence as a mainstream genre.

Yet despite the fact that Rolling Stone recently reported that as of 2018, hip-hop and R&B dominate 31 percent of the U.S. record industry, it's taken a long time for hip-hop's dominance to be recognized throughout the music industry. In its early days, the commercialization of hip-hop was often met with mixed feelings from both its pioneers and listeners. Originally an underground movement started in the mid '70s, hip-hop has evolved into an art that dictates the sound of radio and has served as one of the most important influences for the look and character of the past three — or more — generations. Yet although the first hip-hop radio hit, "Rapper's Delight," by Sugar Hill Gang was released in 1979, it wasn't until the mid to late 1980s that hip-hop would begin to see a huge rise, not only in sales, but also in its cultural influence.

Early pioneers of the genre such as Boogie Down Productions, Public Enemy, MC Lyte, Heavy D & The Boyz, Salt-N-Pepa, LL Cool J, Queen Latifah, Doug E. Fresh, Slick Rick, Kurtis Blow, and more changed the sound of music during that time. One of the most successful rap groups of hip-hop's early evolution, Run-D.M.C., released King of Rock and performed at Live Aid in 1985. Meanwhile, the Beastie Boys made history in 1987 with the first rap album to hit No. 1 on the Billboard 200 chart Licensed to Ill.

These major moments highlighted a period where hip-hop started to become the modern sound of pop, as The Atlantic recalls. Yet, it would take 15 more years for a hip-hop artist (Nelly) to be recognized as Billboard's Top Artist of The Year and for the genre to truly be considered mainstream by the general public. Part of this wait might have been due to hip-hop's propensity for addressing social issues associated with the realities of growing up in underserved neighborhoods in terms and language that some ears might've found difficult to digest. Hip-hop was, and continues to serve as, a voice for those who have felt marginalized by society, a fact that hasn't always been welcomed with open arms — or by awards shows and magazine honors.

In 1989, DJ Jazzy Jeff & The Fresh Prince (aka Jeff Townes and Will Smith), who had been nominated for hip-hop's first ever Grammy for their hit “Parents Just Don’t Understand,” opted to boycott the awards ceremony after it had been decided that the winner would be announced during the non-televised portion of the show, according to The Undefeated. Mogul Russell Simmons, along with fellow rappers, Salt-N-Pepa, LL Cool J, Slick Rick and Public Enemy, also joined in the protest to fight for hip-hop visibility. For its part, the Grammys blamed the snub on time restrictions. Regardless, Smith told Entertainment Tonight that he hoped the boycott would lead to a better understanding of the role of rap music at the Grammys, according to The Hollywood Reporter.

Artists began to fight for the right to be recognized in the same arena as other entertainers in music, but things were slow to change. Yet the best rap performance award presentation did become a televised portion of the Grammy Awards ceremony the year after the boycott. And in the years since, more artists have come to hip-hop's defense and helped it be accepted as a mainstream genre where musicians like Drake, for instance, can shine.

And according to The Guardian, the emergence of streaming has also greatly shifted the flow of music consumption in recent years. Services such as Spotify, Apple Music and Tidal now allow fans to have access to music such as Drake’s without having to leave the house to purchase or, as in past decades, get parental permission to consume music. As a result, hip-hop is more accessible than ever before, allowing artists like Drake to be heard by millions and dominate airwaves and arenas around the world.

In addition to leading Billboard's overall category of top artist, Drake also heads the 2018 year-end Top R&B/Hip-Hop Artists ranking for his fifth time. His latest project, Scorpion, became his eighth No. 1 album on the Billboard 200 albums chart and his year was so dominant that he landed 12 times in the all-genre Hot 100 top 10, breaking a record that dated back to the 1960s, according to Forbes. Scorpion scored three No. 1 songs on the Hot 100 in 2018: “In My Feelings,” “God’s Plan” and “Nice For What.” A total of eight songs featuring Drake appear in the Billboard year-end Hot 100, according to Forbes. Spotify and Apple Music also acknowledged Drake as their 2018 top artist, according to Huffington Post.

The importance of hip-hop, though evident for decades, has finally reached a point where it is being recognized as the biggest genre in music. And while many could attribute this defining moment to the evolution of culture, the advancement of technology, or a plethora of other contributing factors, Drake and his fans may surmise that his number one status is all a part of "God's Plan."