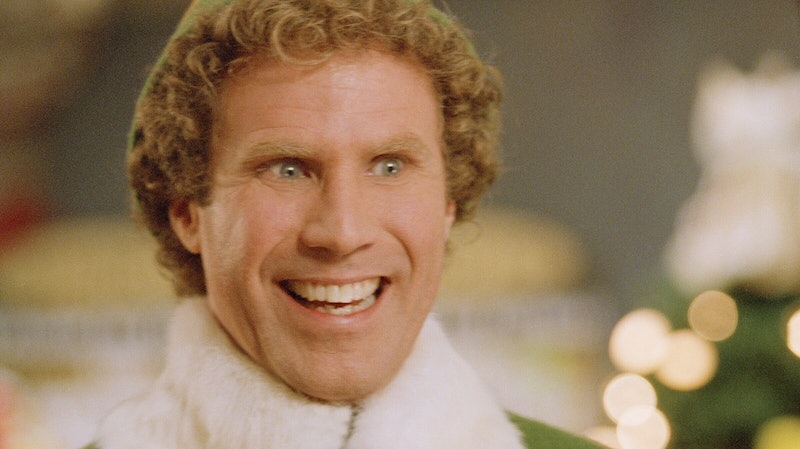 These days, there's a lot to feel cranky about. Cynicism is at such a high that feeling genuine feelings about anything is risking the exposure of our vulnerabilities. It's true that sarcasm can be a defense mechanism to get us through some truly trying times in the world. And as the holidays approach, it might feel like we have to double down on those instincts, to protect ourselves as we have to face family members and holiday traditions. But a little alternative inspiration can come from an odd place, namely, an early '00s Christmas movie starring Will Ferrell. Elf celebrates its 15th anniversary this week and, with its impenetrable positive outlook and joyous attitude, might just be the Christmas movie we need right now.

Directed by Jon Favreau, Elf tells the silly tale of a human who grows up among the elves of the North Pole. Buddy (Ferrell) has spent his life serving Santa Claus, making toys, and helping to spread Christmas cheer. But when a existential crisis sets in, Buddy finally learns the truth: that he was adopted by the elves and he has human parents in the "real world." One of those parents, Walter, played by James Caan, is a greedy, grumpy businessman whose job as a children's book publisher is juxtaposed by his intensely negative attitude.

Walter and Buddy's reunion is a series of lessons. Walter learns that his life of work and making money have resulted in familial neglect, and that he needs to embrace his son's way of thinking, while Buddy learns that everything isn't all candy canes and lollipops. Amidst it all, the elf still manages to spread his signature Christmas cheer.

You see, Buddy is just overwhelmingly happy. He's always got a smile on his face, he always sees the best in people, he's always excited. He wants to learn, he wants to celebrate, and he wants to make friends. Basically Buddy is like a 5-year-old kid in an adult's body, before the cynicism and negativity of the world have hit and turned him into, well an adult. And even when he is faced with some adversity — like cranky raccoons for example — he still faces those problems with a positive attitude and a cheery outlook. Maybe it comes naturally, or maybe it's a result of having grown up around Christmas elves and all of the joy and none of the sorrows that the holiday brings. But either way, his philosophy is to turn any frown upside down.

Buddy's personality is a strong counter to that of his coworker Jovie, played by Zooey Deschanel. As she says in the movie, she's "just trying to get through the holidays." And let's face it: Christmas is hard. Between the shopping, the cooking, the reunions with family members we may or may not get along with and the stress of obligations, humans really put ourselves through the ringer during the holidays. Jovie is stress personified, even though her job is pretty festive. But thankfully, Buddy's eternally positive demeanor helps her see past the material requirements, the consumerist obligations, and the expectations so she can just sing joyfully for all to hear.

And as it turns out, Buddy's outlook might be scientifically relevant to our own well-being. Just take his love of smiling, for example. According to a report by NBC News, smiling can trick your brain into happiness. We go about our lives thinking the reverse is true, that we'll smile when we're happy, but smiling actually makes us happy. The act of smiling release dopamine and serotonin in our brains. "Dopamine increases our feelings of happiness. Serotonin release is associated with reduced stress," says neurologist Dr. Isha Gupta. Then there are the immunity benefits. "What’s crazy is that just the physical act of smiling can make a difference in building your immunity,” says Dr. Murray Grossan, an ENT-otolaryngologist.

It's not just smiling, either. Adopting Buddy's positive attitude might be the key to getting through the most stressful times of life, particularly during the holidays. "Studies have shown an indisputable link between having a positive outlook and health benefits like lower blood pressure, less heart disease, better weight control and healthier blood sugar levels," reports The New York Times. When our attitudes affect everything from our immunity to our blood pressure to our very longevity, it's hard to argue against Buddy's cheerful outlook.

So this holiday season, when the obligations around Christmas and/or other holidays have you grasping at your last wit, throw on Elf (it's streaming on Amazon,, iTunes, and Vudu) for it's 15th birthday. Then, if you can muster it, smile. It won't change everything, but it will help you cope.