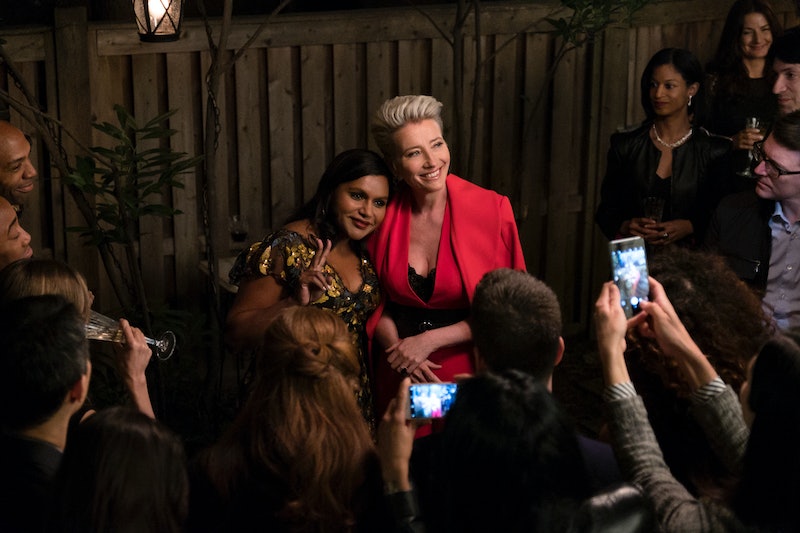 Dudes in dark suits have almost exclusively populated the post-primetime TV slots throughout history. (Lily Singh will break up that tradition when her own NBC late night show premieres in the fall.) But Mindy Kaling’s new movie, Late Night, imagines a world where a female host has had her own show — and her own style — for decades. Emma Thompson stars as Katherine Newbury, a comedian whose all-white, all-male writers room has let her act get a little stale. Katherine operates within a masculine space, both within the world of late night hosts and inside the team at her own show, and her on-air wardrobe reflects not only the male-dominated uniform of the industry but also her unique identity in it as a woman. It also evolves, as she does.

Katherine’s style is one of the standout elements of Late Night. You'll come away from the film awed not only by the Thompson’s performance, Kaling’s witty script, and the deft hand of director Nisha Ganatra, but dreaming about every amazing suit Katherine wears, from a double-breasted pinstripe to a femme tux — and wondering if you can pull them off in your business casual office. (You can, but maybe save that tux for a party.) Speaking to Bustle, the film's costume designer, Mitchell Travers explained the challenge of creating an authentic style without a road map.

“The interesting thing about designing a character like this was there really was no real world reference,” Travers says in a May phone interview. “There was no person to point to that has had this experience, or fulfilled this role in any way.” So he looked to the women in comedy who’ve done similar work, including Ellen DeGeneres and Joan Rivers. That influence is evident on screen, when Katherine wears sneakers with her suits à la the host of The Ellen DeGeneres Show or a bow blouse that evokes looks from Rivers’ far-too-short run on The Late Show in the 1980s.

“And so [Thompson] loved that, and that was our jumping off point really to figure out what this woman looks like,” Travers says. “Especially somebody who would have come up in the early '80s, when it was really a man's game. And she would have been kind of one of the few trying to cut her teeth at the same time."

In addition to getting feedback from Thompson, Travers also collaborated with Kaling on the fictional host’s costumes. “Mindy is great. Mindy is very involved in all levels of production,” he explains. “She expresses her own self through clothing so much, so I think it's just part of the way she communicates.”

Though working with Kaling and Thompson was easy, Travers encountered challenges in actually sourcing Katherine’s suits at the time Late Night was in production. “Now you can go to Zara and there is fabulous suiting there,” he says. “But at the time, women's suits in the way that we were trying to find them weren't really readily available. So, we turned to Stella McCartney, who was hugely helpful to us. Just because Stella was one of the ones pushing that silhouette early and what I really was interested in was figuring out how the relationship to tailoring could evolve with that character.”

As Late Night progresses, Molly helps Katherine out of the safe rut she and her show have been stuck in, and that change is reflected in subtle updates to what Katherine wears. “So taking her from a place that was much more of menswear tailoring at first: the suits were fitted, but they come from more of a menswear sensibility,” Travers says. “And then as we pushed the style and as we pushed the silhouette, we take the tailoring to a place that can be sort of feminine when you go almost past the point of menswear, and you get into these sexy lengths, and the jackets have a waist and we would tailor to the hip instead of to the shoulder.”

Travers also reused pieces, particularly that killer navy pinstripe suit, in a way that we don’t generally see on screen, but feels more in line with how real people dress themselves. This choice also further reinforces where Katherine exists in the male-dominated world. “We wanted that for her in the beginning where you get the sense that she is wearing the same suit in the way that her counterparts would,” Travers explains. “But then as she finds her humor again and she's much more open to the world changing around her, we wanted to watch her say to her stylist, ‘What's that on the rack?’ or [be] willing to bring some fresh ideas into the room and just be more receptive to them.”

That willingness to experiment is an element that Travers would love to see more people incorporate into their own style. Suits might seem like too bold of a choice for some women, but Travers insists you can pull them off and shares advice on how. “I'm really into columns of color right now and you are seeing it expressed a lot in tracksuits, two-piece sets for women,” he says. “But I think there's a lot of power in accessory and it's really to do with just color from head to toe.”

For those worried about looking overly formal, Travers offers comfort. “I say a suit doesn't necessarily equate to formality at this point,” he says. “I think people are dressing themselves in such individual and specific ways now that I think a suit can be sexy. A suit can be simple, it can be powerful, it can be masculine, but just pay attention to the cut or color and I really feel like people should take more risks with what they wear. I don't take clothing that seriously. I feel like a lot of people do. I feel like people think that, ‘Oh I would never wear that!’ And I'm like, ‘It's very easy to if it fits just try it on and you might be surprised.’"

Travers’ advice echoes the film’s themes. It’s when Katherine simultaneously steps out of her comfort zone and is most herself that she's at her best: a woman killing it and blazing a trail for other women’s success too.