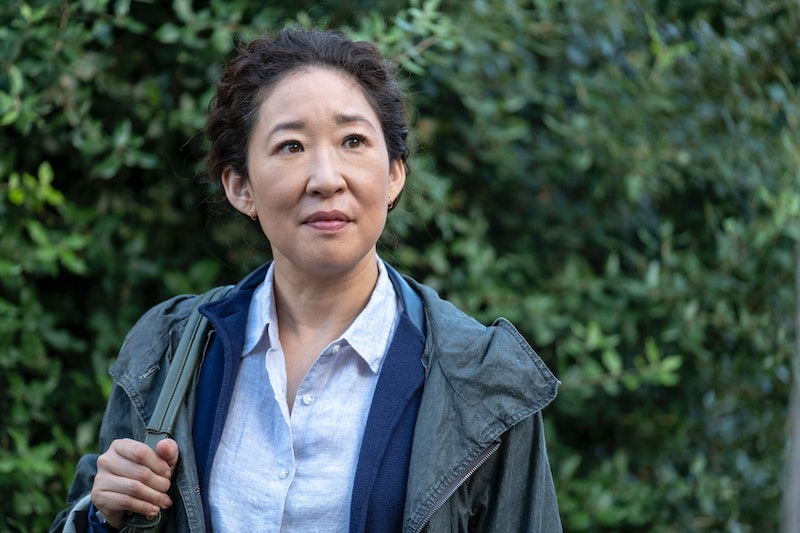 The scene cemented the already buzzy BBC America drama as one of the most subversive and sexy shows of the modern era. And with Killing Eve's upcoming Season 2 (premiering April 7) picking up just 30 seconds after that chaotic moment, viewers will get to witness every emotion Eve and Villanelle feel in the aftermath. When speaking with Bustle on the phone about the show, series star Oh is in great spirits — she's lounging in bed on the first morning she's been able to sleep late during her press tour for Killing Eve Season 2. Her mood is the exact opposite of her onscreen alter ego's, as Eve in Season 2 has never felt more untethered and lost.

"Eve is still in the in the throes of shock, actually," Oh says of where Killing Eve picks up in its second season. "You see her try and come home and re-establish normalcy, even in the way of like, I just tried out something new for a second, stepping outside of MI5 and working with Carolyn. She's just thinking about her, like this is going to be back to normal."

Of course, her denial will soon come crashing down. "It just can't happen," Oh says. "The stabbing has changed her in a way that she's refusing to deal with. In some ways, the shame of doing so and also what that opens inside of her follows her throughout the second season."

In the moment, it appeared as if Eve regretted stabbing Villanelle. But Oh hesitates to agree with that thought. "That's something that you'll have to see," she says after a pause. She adds that the "regret or shame" of that stabbing shapes and emboldens Eve in all her relationships this season, be it with Villanelle, her boss Carolyn, her husband Niko, or anyone else. "You see Eve just continue going much further and then being pushed beyond her limits," Oh adds. "She thinks she can handle it."

But that one swift moment in Villanelle's flat has changed Eve and Villanelle's relationship irrevocably, though in a way that might surprise viewers. "I think it's much more intimate," Oh says. "You can see from the first episode that Villanelle has her own very twisted take on what that stabbing means to her. But something has transpired between them that is a type of intimacy. And definitely obviously symbolically, it is."

The parallels between Eve stabbing Villanelle and consummating their complicated, layered relationship are all there. And according to Oh, the sexual tension that viewers picked up on between the two women isn't imaginary.

"The stabbing, for me, is absolutely a moment of connection, deep and very intimate connection between them," Oh says. "And they're bound to each other in even more of a physical way. Before there was a kind of a fascination and circling of each other and by the end of the first series, one basically enters the other in a way that Villanelle doesn't believe that Eve was capable of doing and is somehow darkly pleased that she does."

Only on this show would a stabbing make a relationship more intimate instead of ending it altogether. "I think it was dealt with extremely well, because it's that unexpected act and because you know that they're so intimately connected, that the act kind of transcends the violence and becomes another way for them to connect," she says with a laugh.

The relationship between Eve and Villanelle is unsettling — you're rooting for them to get together, but the closer they get, the more violences transpires. The danger is what makes the relationship so intoxicating, but Oh isn't sure they can be together without it ending in tragedy. The drama therefore comes from figuring out ways to prevent that end from coming to fruition.

"How one sustains that or changes that or transforms that within a longer running TV show is always a challenge," Oh says. "What I think is important is to keep that desire and the need for connection honest. Desire and connection doesn't mean a final kiss. It should never be tied to one act or another because I just think that's too limiting."

Oh likens the dynamic between Eve and Villanelle to that of a toxic relationship or an addiction. "I don't know if you've ever had a really bad relationship or if you've ever suffered an addiction in any kind of way, but the moment away from the person, the act or the substance is so much of the drama for the person who is holding the obsession," she says. "That is a big part of the show. For the first season our characters didn't really meet until the fifth episode, that is more than halfway through the show. But what was built from the very beginning was this growing obsession."

While viewers had to wait until the fifth episode of the first season to see Eve and Villanelle's first real face-to-face conversation, Oh promises it won't be that long in Season 2 until the two women reunite.

"They will, don't you worry," Oh says with a big laugh. "They will, but what I hope will continue is that the audience will struggle with wanting to see them together. It's like with your friend or yourself who's in an obsessive, terrible relationship, you don't really want them to go back to that person. But we are absolutely watching at least Eve go back to the person."

Oh knows that the inevitable ending won't be a happy one for either character. But she hopes that the writers can find a "third way" to end the series, when the time comes.

But she laughs again as she adds, "Killing Eve ends with I die, oh no! It's in the title!" We should have seen it all along.

More like this
Ruth Wilson’s New Thriller Spotlights A Controversial Irish Institution
By Darshita Goyal
Wedding Season’s Omar Baroud Currently Stars On West End
By Darshita Goyal
Nicola Coughlan Shared A Lady Whistledown Excerpt From ‘Bridgerton’ Season 3
By Grace Wehniainen, Alyssa Lapid and Sam Ramsden
Stanley Tucci Is Next Level In The BBC's 'Inside Man' Trailer
By Sam Ramsden and Sophie McEvoy
Get Even More From Bustle — Sign Up For The Newsletter